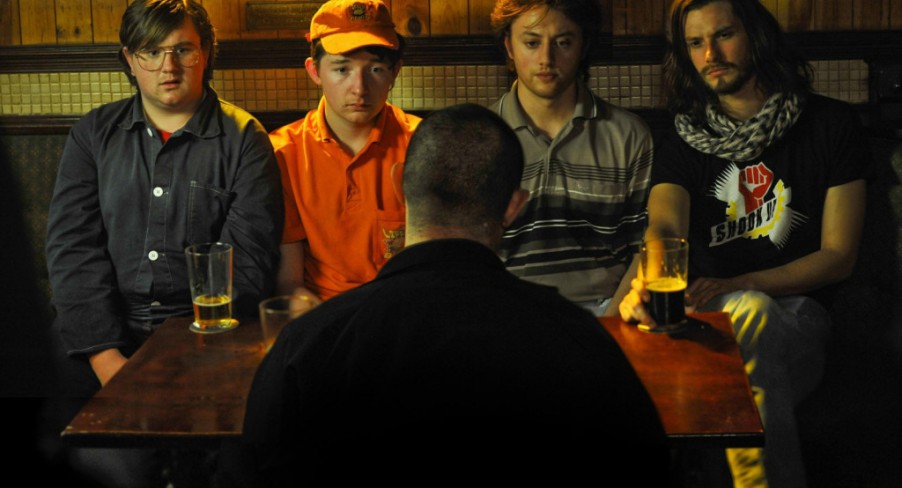 Ben Barnes (Dorian Gray, The Chronicles of Narnia: Prince Caspian) plays the part of Neil McCormick. Like any other overconfident, aspiring and driven young musician, he wants to be famous. But not just any ordinary kind of famous, no, he wants the ‘world domination’ kind of famous. He’s got everything sorted in his mind. He and younger brother Ivan (Robert Sheehan of Misfits, Season of the Witch) will write the best records ever, play to the largest audiences ever and to become the greatest stars since The Beatles. Only bother is, he never counted on old friend, Paul Hewson, striving for the very same thing.

The film title will without a doubt throw some people off as to what it’s all about. Some might think it’s just U2 prattling on about their accomplishments. Others may think it’s about some crazed individual that tried to go all Chapman on Bono but (obviously) failed. The thing about this film is, in recent years, a lot of people have gone off Bono so they’ll assume that the film is the former and therefore most likely avoid this flick, which is truly a shame. Despite his name in the title, Bono’s screen time is whittled down to that of a side character. U2’s success leaves a defining mark on Neil and Ivan’s relationship and struggle for fame and recognition. And that’s where the story comes from; Neil McCormick’s memoir Killing Bono: I Was Bono’s Doppelgänger.

The film begins in 1987, setting a scene with Barnes’ Neil looking on as U2 come back to Dublin for a gig. We then jump back eleven years as the story retells everything up to that point. We learn Neil and Ivan were schoolmates of Bono (Martin McCann) or Paul Hewson as he was known way back when and the rest of yet-to-be formed U2. Seeing him as no threat Neil laughs off Bono’s attempt at joining a band saying he could never be a rock star because he doesn’t look like one. Though Neil smugly announces he himself does. A friendly rivalry between both boys is apparent from the start. Straight off the bat, McCann makes Bono’s dedication clear, shrugging off remarks about changing his band’s name as well as his own.

It’s here we see the beginnings of the man Neil will become. With every decision he makes, the rope that Neil is dangling by begins to unravel. He becomes obsessed with beating U2 as if Bono were the source of all his problems which makes him adamant that he and Ivan start over in London despite unwisely reeling in the help of a known criminal. Neil is driven purely by resentment that he’s not where Bono is and guilt from the secrets that he has concealed from his brother.

If I’m going to be picky with Barnes performance there are only two things that I can honestly say niggled at me. Firstly, Barnes, who is by no means Irish, does do well with our tricky lil accent in the moments he actually holds onto it. But that’s not my main gripe. Nope, that one can slide. While he manages to create a convincing relationship with Sheehan, the other pivotal relationship in his character’s life i.e. with girlfriend Gloria (Krysten Ritter) falls stupendously flat. There’s little if no chemistry between the actors after their characters get, ahem, fleshy.

But enough of the bad! Barnes shows that he may not be just another pretty boy with just one trick. Kudos partially belongs to the writers for the witty dialogue but Barnes also deserves praise because it would be hard to deny his coming to life especially when with Sheehan. The brotherly bond between them is so gripping and realistic that you rightfully feel for both of them when times get hard instead of playing a blame game. The seriousness of their story is drowned out by the humour the writers chose to use. Lucky for them, Sheehan and Barnes are well able to handle the task they’re given. When Neil quips “What would Mam say?” after he realises Ivan’s after taking something at a party, he suddenly shrugs it off, in what appears to be an ‘Ah sure, it’s grand’ moment, and joins in leading Neil to end up in an amusing situation. Or when Ivan, who is hungry and cold, is faced with nothing but rejection letters childishly bundles himself in blankets eating a can of beans while scooting himself along the floor to get closer to a heater. We laugh because Sheehan has the ability to honestly represent the naivety of a little brother who wholeheartedly sticks by his brother to a fault while simultaneously having faultless comedic flair.

Some of the film’s best moments come from the supporting cast and with names including legend Pete Postlethwaite (Inception, In the Name of the Father) and Peter Serafinowicz (Shaun of the Dead and Run, Fat Boy, Run) is there any wonder why. The late Postlethwaite makes his last appearance onscreen as the boys’ flamboyant landlord who throws wild parties. He commands every scene and parades younger actors Barnes and Sheehan around as if they were his props. Serafinowicz appears as the McCormick’s manager, Hammond. I needn’t have to explain why this guy is so funny and if you don’t already know his performance says it all.

McCann’s portrayal of the man himself, Bono, is quite refreshing. He’s the opposite of Neil. Calm, collected and most importantly he’s unassuming. Now, I ain’t for a second thinking that the real Bono is some average Joe who eats pies by the name of humble cause we all know he’s not. The fact that an almost unknown actor can shed that sort of light on someone of Bono’s calibre is something worth noting. Irish comedian Jason Byrne’s quick cameo as a hotel receptionist is utterly priceless as he awkwardly tries to convince both brothers separately that there is no Bono listed at the hotel despite hundreds of fans screaming outside. Saying this, Killing Bono is undoubtedly a male driven cast. Ritter, who is present as the only real female, is instantly in a supporting role, and is even further sidelined as the protagonist’s love interest where, as I said before, the chemistry is as dull as dishwater.

Realistically, Killing Bono isn’t going to scoop up any major awards. Director Nick Hamm is mostly known for 2001’s The Hole starring Thora Birch and Dexter’s Desmond Harrington. And though the cast work well together, no one’s going home best actor. The thing is, that’s not the point of this story. If you want to see an ultimately light-hearted flick that’s filled with laughs whilst telling the story of a few rockers from two decades back then you shouldn’t miss Killing Bono.