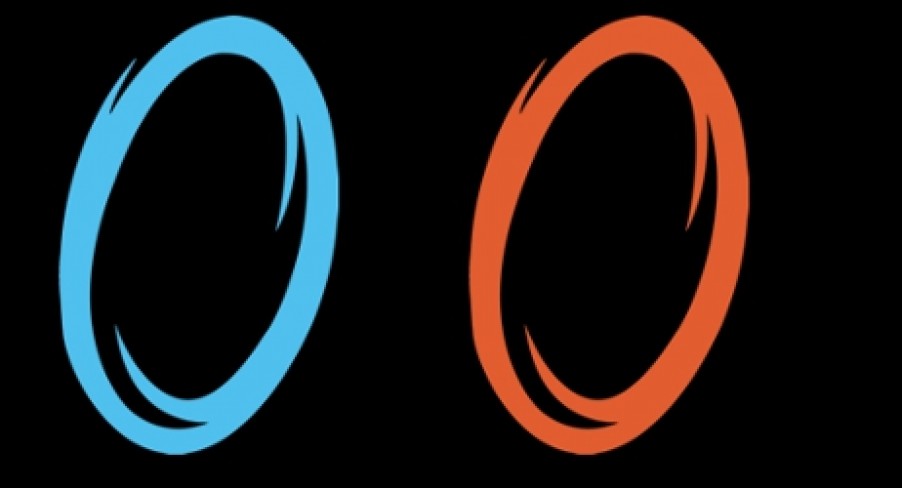 Picture this: you’re being tested by GLaDOS in Aperture Science’s Testing Facility. You manage to escape with the Aperture Science Handheld Portal Device in hand and BOOM you’re back in your normal life with one of the most incredible inventions ever. Forget about the whole moon rock gel/white surface things you have to worry about when you’re playing the game. This is real life, yo. You have free reign. So what do you do? Well here’s 11 everyday things that would be made easier/more fun with the use of a Portal Gun. There’s nothing worse that being in the middle of an epic Halo battle and realising you’re desperate for a leak. Fear not, gentle reader. With the Aperture Science Handheld Portal Device, bathroom breaks and a thing of the past. Pwn from the throne, so to speak. And there’s no need to invest in fancy schmancy technology that’ll only end up costing you a small fortune (see picture).

You: Aha, I’ve got it. I’ll just use my Portal Gun. I can still play while I’m on the can.

Getting The Groceries Home

When I lived in London, the weekly shop was a massive chore. It wasn’t so much the 10 minute walk to Tesco, but the 5 and a half hour trek back laden with 1500 tonnes of groceries. There were days when we’d sit in the apartment drumming up the will to start the big adventure. And every single time we’d regret the decision we made about needing to eat. So, when I got to thinking about this article, this was one of the first things to pop into my head. You could even steal stuff if you were sneaky enough. Nobody ever looks anyone in the eye in the toilet paper section for fear of being outed as a user of TP. Best chances are there. Other People in Your Head: Yeah, yeah. Can we not do it later?

OPiYH: But it’s so tedious and boring. You know we hate doing this every week.

You: Yeah, but look at this neat contraption.

Everyone: We motherfrakking love taking out the bins. Not technically every day for any one person, but an everyday experience around the world. You know the drill, you pack up all of your possessions, you put them in boxes and label them accordingly. And by “accordingly” I obviously mean giant black letters stating “THIS IS MY STUFF AND IT’S INCREDIBLY FRAGILE. CAREFUL, NOW.” And then you throw caution to the wind by letting them all get heaved into the back of a van and driven to their destination all the while thinking “we’re never doing this again.” But with a Portal Gun you cut out the middle-man altogether. Hell, you don’t even need boxes. You place a blue (or orange, if you prefer) portal in your house, drive to the new one and place the corresponding colour portal and Bob’s your figurative uncle.

Significant Other: WHAT? How the EFF are we supposed to have a proper relationship with you on another continent?! I can’t just up a leave my life. You ruin everything. You big life ruiner!

And they all lived happily ever after.

Having Someone To High-Five When You’re Alone

Second to bathroom breaks during Halo marathons, there’s nothing worse than saying something epic in your head, or out loud for the crazies among us, and not having anyone around to lend a friendly high-five to say “well done, buddy, you nailed that one.” Also, conversely, you can be your own shoulder to cry on. Nobody likes commuting. Those who say they do are liars or completely mental. And if your mother taught you anything it’s that you should stay away from those types of people. Some of you, I’m sure, commute for 5 minutes to your weekday morning destinations but for the vast majority of you, it’s about an hour. But with a Portal Gun that could equate to 5 extra hours of sleep a week which is roughly 10 days a year. Which is roughly the amount of time needed to plan on kicking Matthew McConaughey to the curb but to ultimately realise you’re desperately in love with him. And you’re thinking “hold on a second here, doesn’t that give you 10 hours extra?”. Well the answer is yes, smartypants. But not for sleeping, no, you’ll also have another 10 days a year in mothereffin free time. Which is enough time to fight for Slovenian Independence.

If any of you have ever worked in retail, you know the perils of a difficult customer.

Customer: Hi, yes. I bought these jeans here yesterday and they don’t fit.

You: Maybe, just maybe, it’s because you bought them two sizes too small.

Customer: How dare you!! You, sir are a horrible person. I ought to find your manager and make a complaint about you right now.

You: Mmmhhmm, I’m hearing what you’re saying. But how about you GTFO? Portal gun’d. At some point in their life, most people have tried to break open a Terry’s Chocolate Orange. It’s not easy, it’s not neat and it’s not safe. That’s where portals come in. Put down your sledgehammer, sheathe your sword and lower that laser. Simply make yourself a vertical portal loop and let terminal velocity shatter that sucker into millions of delicious, lethal shards. Mmm… lacerated. Also, just because, as with a lot of things, I reckon it’d be far more awesome than breaking it when you’re relatively stationary.

You can imagine the pub chat now.

Friend: So, what did you get up to today?

You: Well, sure didn’t I escape from the Aperture Science Testing Facility with this yoke.

Friend: What does it do?

You: Isn’t it only a godsdamn Portal Gun.

Mirrors Can Be A Thing of The Past

It’s true, with your very own Portal Gun you can be as vain as you want. Life is your mirror. Simply pop a couple of portals on the wall in your desired locations and you can see how your ass is looking in them jeans. Damn fine, is how. Or, you can even see how effing hideous those crocs make your feet look.