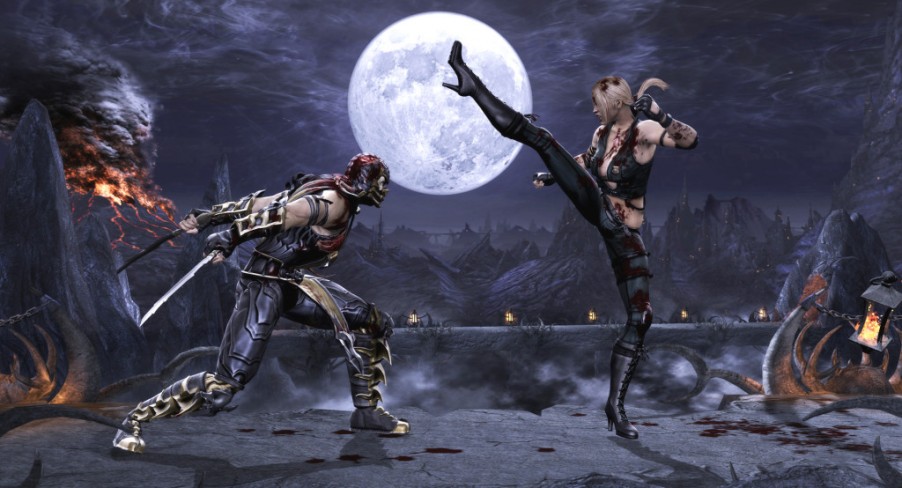 At last year’s E3, Mortal Kombat was officially unveiled and gamers and press in attendance got demos and previews. Undoubtedly, it was one of the highlights of the convention as it racked up “best of” awards from nearly ever major gaming magazine. And it ranked well on the “most anticipated” lists from around the globe. So, you can see why Pop Culture Monster could hardly contain himself when his copy arrived. There’re few things as sweet as the smell of a new game.

Very few games have lasted long enough to say that they’ve just released their 9th title in the series. But few games can also boast that they’ve been this resistant to changes in the overall feel of the game. It’s pretty much the arcade version of 20 years ago, but less pixilated. The game is rendered in 3D with a 2D playing field, forming what’s known in the biz as 2.5D. Sounds exciting. The biggest change over the franchise’s history has been the gradual ballooning of the female characters physique. And by “physique”, I obviously mean boobs. How exactly they can stand let alone fight with them as big as they are is beyond me.

But let’s not digress…

The game is visually pimped-out. The stages are nothing short of stunning and the characterisations are impressive. The new X-Ray moves are one of the better additions to the game. Once executed, they let you see just how much physical damage you’re actually doing to bones and organs. It’s comical violence at its best. The game’s story mode recaptures (or, retells) the story from MK1 all the way to MK3 and has some interesting twists with regards to timeline. It will give players a good 6-8 hours of gameplay.

One of the game’s major problems is inconsistency in the difficulty of the AI fights, most recognisable in the Challenge Tower. You may be outright beaten black and blue and crying into your controller in frustration one minute and finishing bosses with flawless victories the next. The problem seems to lie in the game’s reliance on its users to button-bash. The combos are geared towards button-bashing and you can execute massive combos very easily should you choose to do so. It all seems a little cheap.
The legendary fatalities make a return here, thank jeebus. Because a MK game without them seems rather pointless. The fatalities are once again simply disturbing. But after you successfully execute a few you realise that they’re all almost exact replicas of each other, usually dismemberment followed by celebration with a skull trophy.

Mortal Kombat hasn’t wowed me the way I figured it would, given my love of a good hacky-slashy, punchy-kicky beat-em-up. Visually it’s very strong, and the 2.5D gameplay suits the franchise well. The story mode is one of the better in the genre and the fatalities are satisfying. The minigames such as Test Your Sight are entertaining, albeit pointless and gimmicky. And with a rather lacklustre roster that includes no new characters and extremely cheap special moves, the game isn’t adding anything new or exciting to the genre the way Capcom have with their Street Fighter franchise.

It’s entertaining but beyond the  blood, guts and disembowelments, it really hasn’t got anything to sustain your enjoyment for longer than a couple of fights at a time. It’s definitely one for the beginners to the genre.

The game is available now on Xbox 360 and the PS3.