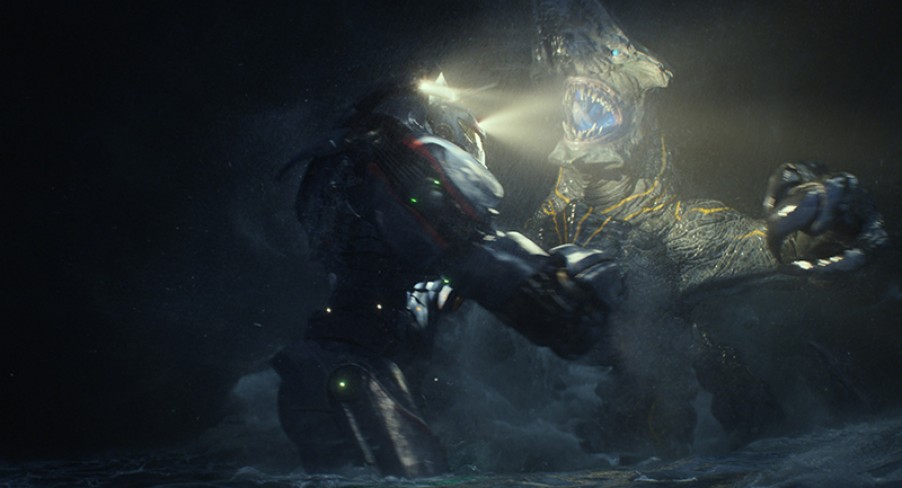 They don’t make movies like Pacific Rim anymore. Mainly because giant monster movies are pulpy trash made on shoestring budgets. They can be a lot of fun, but they haven’t been taken seriously in quite some time. Guillermo Del Toro has decided to take the concept seriously again.

Not in the sense that this is a serious, gritty movie. But more that Del Toro got a studio to put some serious money behind it. And it’s an important distinction that the push came from the creative side, rather than the studio pushing an idea, as was the case with the American Godzilla. The result of Del Toro’s push, is entertainment.

There’s an awful lot of formulaic crap, but the main problem with each element is simply that we’ve seen it all a million times before, if we hadn’t seen it before, it’d be far easier to call this solid filmmaking. There are some bits that are just plain crap, with plots that feel shoehorned in, and Stacker Pentecost’s honourable role in the final confrontation is a bit groanworthy, even if they did spend half the film hinting at it. But most of the time this is an example of why we see formulae arising in film, because it can work quite well in serving the story.

Underneath the weight of all that formalism, is a solid plot, and a plot that features giant robots fighting giant monsters, which, let’s face it, is why we’re here. For the first time in the many years of giant monster movies, the special effects actually do it justice. It doesn’t look like a cartoon, or stuttery stop motion, or a man in a suit. It looks like giant robots fighting giant monsters. And what’s more, those fights are remarkably well shot. Despite the scale, the camera pulls back far enough to let us see what’s going on, apart from moments when we’re left deliberately anxious or uncertain as to what the enemy is doing. One fight in particular, on the Hong Kong docks, is a glorious titan scale cage match.

Despite its drawbacks, the plot works, the action is solid, and there’s a thunderous performance from Idris Elba, particularly that “tonight, we are cancelling the apocalypse!” speech from the trailers. There are just a few genuine problems:

One, despite the international cast, or perhaps because of it, this is an America saves the day movie. There are Jaegers from Russia, China, Australia and America. The Australian one comes off quite well, but the American one saves the day. Even when given a multi-cultural piloting crew (American and Japanese), it’s the American that saves the day. I’m sure this made loads of sense when planning the domestic reaction, but all those international characters only further emphasise that america’s the hero, which global audiences may find irritating. And the portrayal of the Russians is borderline racist.

Two, There is one woman in the entire movie. That’s it. One. And, despite being a great fighter, she’s still a meek little thing who needs the hero to help her find the strength to be a pilot. While they mercifully left out a love story, they still made sure to point out that this woman finds the hero devilishly attractive. It would actually be less noticeable if there were no women in the film, but with just the one the problem is emphasised every time she appears on screen. Oh look, there’s Mako, where are all the other women?

Three, the neurotic, comic-relief scientists. Charlie Day’s Newt (yes, they called a a short bespectacled scientist “Newt”) is likeable enough as one of the scientists, but Burn Gorman’s Gottlieb is going to irritate the hell out of some people.

And finally, Guillermo Del Toro’s inexplicable belief that Ron Perlman has a place in films. There is one scene where Perlman works (his second one). Every other moment of his screentime is an irritation. Guillermo, next time you’re reading a script and you find yourself thinking “Ron would be perfect for this character”, please try and continue the thought with “I should try to find a way to cut them.”