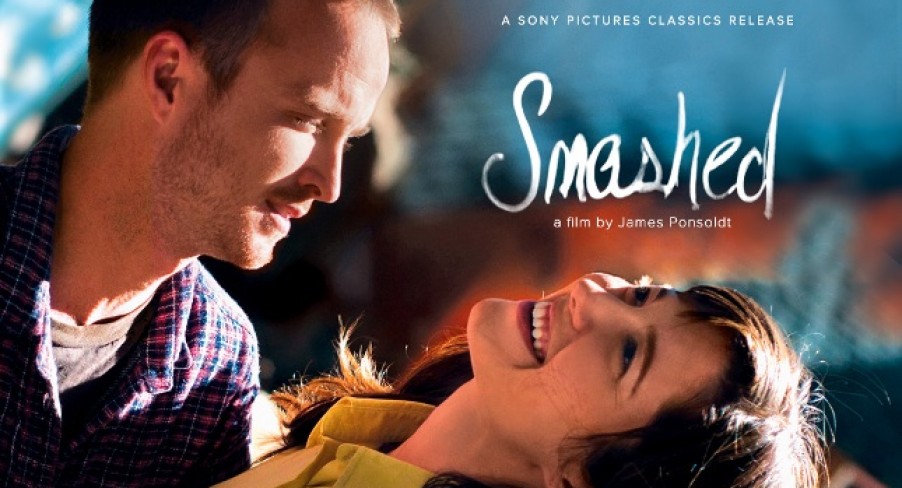 There’s a neat mine of material around recovering from alcoholism which you’d expect to see exploited more often in film. Smashed is one of the few films which heads in that direction, it then proceeds to not do a whole lot of actual mining.

Smashed follows Kate Hannah, played by the ever likable Mary Elizabeth Winstead. As the movie opens, Hannah is just coming to the realisation that she is an alcoholic. Supposedly Smashed is all about her recovery, charting her life as she becomes sober. Unfortunately the script leaves most of this development out, and just leaps around scenes which merely discuss the moments we really should have seen.

After Hannah first attends an AA meeting, we get a systematic little recovery montage, followed by a scene where other members of Hannah’s AA group are congratulating her, saying how difficult they found their own first three months. How those three months are the toughest part of the process. Surely, if those three months are such a big deal, it would have been an idea to to put them on screen?

The film is littered with these kind of moments. Too often the film leaps forward without properly looking at important pieces of development. It makes the writers seem afraid to try their hands at crafting those scenes. This, coupled with the fact that the early scenes of drunkeness don’t really ring true, really gives a bad impression of co-writers Susan Burke and James Ponsoldt.

Ponsoldt’s direction, while largely solid, does suffer from a glaring flaw. The movie is shot too close. At first this seemed to be a technique designed to make the early drunken scenes and scenes of chaos in Hannah’s life feel uncomfortable and disorienting. But the shots do not improve as the film labours on, and Hannah begins to get to a better place.

However, the critic in me may be a tad harsh. For all the areas it avoids, Smashed does enter some interesting places. Hannah’s relationship with her co-worker and fellow AA attendee Mr. Davies (played excellently by Parks and Recreation star Nick Offerman) is executed really well, with nuanced moments between the two and a well realised supporting character in Davies.

One of the areas the film really tackles head on is how difficult it is to sustain a sober relationship with someone who you’ve only ever known, and who’s only ever known you, drunk. Mr.Davies lost his wife because of it, Hannah’s mother lost her husband because of it and the strain Hannah’s newfound sobriety puts on her own marriage is a huge theme. Unfortunately this theme goes a little too far. The overriding message of the movie seems to be that if you go sober, your relationship is doomed. There is little room left for hope.

Despite a script avoiding any of the real drama it should have been tackling head-on, Smashed still offers up plenty to showcase its performers’ talents. The acting is in really top form here and all of the players either get to show that they can do more than just comedy (as in the cases of Offerman and Megan Mullally), or simply show why their names are so respected in the dramatic fields. Winstead in particular nails several difficult scenes, and comes off as a credible drunk even though the writing is conspiring against her. Aaron Paul (Breaking Bad) also gives a strong performance as Hannah’s husband Charlie, though Oscar winner Octavia Spencer is criminally underused as Hannah’s AA sponsor.

Having thoroughly ransacked the writing, I must say this, Ponsoldt and Burke are good writers, there is good work here, just a few too many structural mistakes. If the movie leaves you questioning their ability, the closing lines really make up for it.