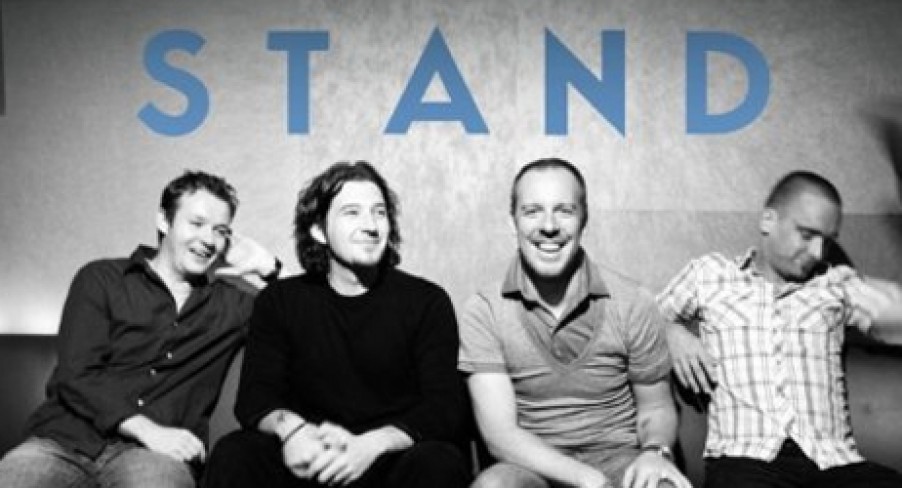 It’s been over a decade since I was first witness to the mentioning of a band that goes by the name of Stand. The band consists of Neil Eurelle on vox and bass, Alan Doyle on vox and guitar, David Walsh on guitar and keys and Carl Dowling on drums – although the latter no longer seems to be a part of the crew, if Facebook and MySpace are anything to go by. They formed in 1998, just four boys who met in school. Leaving Ireland behind as their base in 2001 in exchange for the U.S of A, Stand has recently come back to their home turf with a new record in tow.

As their Twitter mentions we should ‘Imagine the writing of Neil Finn mixed with the wide open spaces of Pink Floyd’ when listening to Stand. Their latest album 100,000 Ways to Harvest Hope was recorded in a studio owned by the Goo Goo Dolls. The album sleeve tells us that ‘These ten songs were recorded in nine days’. A lot of the time, when a band hands out a rushed record it can either show their excellence or their limitations. Simply put, 100,000 Ways … ain’t the latter.

The opening track Love Will Never Creep In features Eurelle on vocals. Straight off the bat, it’s evident that Stand’s aim is to provide their fan base with an enjoyable rock album. Although Eurelle sings ‘fun will keep it casual’, it’s unlikely that their fans will just want a one-off night with the band.

The catchy rock-rift of The Living Kind gives us the best of both worlds when Doyle and Eurelle sing concurrently utilising both singers instead of leaving one to the job of back up vocals. Saying that, having two singers does work to serve the band well as Doyle tends to be the one that serenades with his rich vocals on songs like the nostalgic No Regrets and the environmentally conscious Nature My Mother. Eurelle’s the one that adds a raspier side that’s going make you want to rock your socks off when you switch over to the sarcastic Generation Me which shakes a finger at modern society as it is. The newest single Olivia has the potential to sound like any other love song that’s addressed to some girl. In this case, when they sing ‘Olivia, the world is better with you in it’, the cliché slips passed us when seen performed live on stage because Eurelle’s charisma and Doyle’s vocal talent are surely enough to make any girl swoon.

100,000 Ways… true to form for the band, closes with an acoustic ballad. Stuck in My Shoes again showcases Doyle’s vocal ability; his soft harmonies join forces as Dowling’s whispering drums. Though it’s a little reminiscent of an old Damien Rice number, closing the record with a signature ballad serves as a nice relaxant just before you gear yourself up to press repeat and indulge yourself all over again.

For those of you who crave to hear more from Stand. Their fifth album, 100,000 Ways to Harvest Hope, as well as their previous stuff, is available on iTunes.