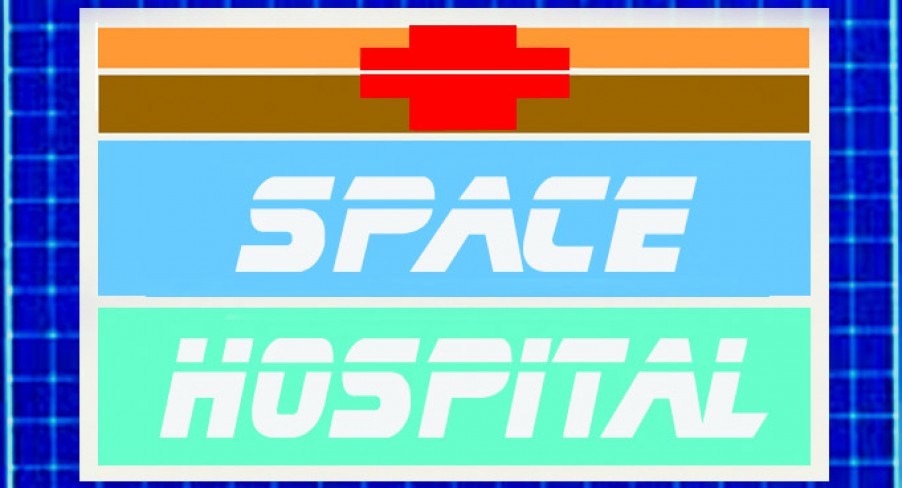 A bionic tennis player, a half-man half-robot baby and alien lizards. That’s all normal right? But of course it is…in Space Hospital. It’s brilliantly bizarre and hugely compelling as we are taken on a journey through the outer rims of space in a flying hospital manned by absolute nutcases. This absurd comedy webseries is as near genius as it gets. We even get commercials, but not your normal commercials. Oh no, these are for the craziest products you could possibly think of, but after watching this series, Boobification and the EarTongue seem relatively normal. This week PopCultureMonster sat down with one of the Space Hospital creators, Robert Poe to find out the story behind the webseries…Surrealism just got its ass kicked.

How did you come up with the idea for Space Hospital?

Sig Ueland and I met in the Second City (improv) Conservatory in Chicago , and we had very similar tastes in pop culture. We were both practically raised by television in the 70’s and have a love/hate relationship with classic T.V. Space Hospital was one of many ideas we batted around, but it was the one that really stuck, mainly because of the limitless potential for satire and storylines.

What made you decide to do a webseries?

I had intended to go to film school, but couldn’t afford it and approached Sig with the idea of shooting a pilot for Space Hospital, so I could get some experience directing. Sig convinced me that a webseries was a more contemporary approach, and it had the added benefit of a real audience, whereas there are thousands of pilots out there that never get made into shows. I had no idea what I was getting myself into.

Season One was shot over two weekends. We cast only people we knew and had worked with before. The first shoot was a long three day weekend (we did only eight hour days) in which we shot the first six episodes. Sig had written nine episodes, so we went back six months later and shot t two more episodes along with some short commercials. The first two episodes were eventually condensed into one, because they had similar storylines.. Post production was a long process, and it took an entire year for the first season to be released. There was a long, steep learning curve. When we got interest from Koldcast.tv to release Season One on their channel, the decision to go back and remaster those originals episodes was made, despite having just begun shooting and simultaneously releasing Season Two. The characters are an amalgam of stock characters from a variety of T.V. genres and styles. Barbara and Ratknee are like Ginger and Mary Ann, Betty and Veronica, etc. Dr. Goode is the heroic male lead, but with crippling personal problems. Snead is a sort of cross between Captain Kirk and George Bush, with a bit of Bob Newhart thrown in. Aknar is the stereotypical badguy with a vaguely middle-eastern style. His make-up and clothing suggests Ming the Merciless or Dr. Zin, but his personality is about half Ted Baxter and half Dr. Smith from Lost in Space.

The easy answer can be obtained by sitting through the credits at the end of Log 7 -“Oma-gone”, where there is an added scene that reveals the culprit, and the method. However, this really just begs the question “who is behind the assassin, and what is his/her/its motives?” This question will be answered in season two.

Can we extract any details about Season 2?

Season two is more linear in nature, and each episode will lead directly to the next with cliffhangers, revelations, and much more action. All of the characters will undergo changes, starting with the first episode, and continuing through the season. We’ll also see the future of Earth, and what really lies at the center of a nebula. Is there going to be any notable guest stars in Season 2?

Season two deals with the characters and hospital in crisis, and will not see a lot of emphasis on guest stars. Season Three, however, we hope will be star-studded

Would you consider doing a musical episode?

Half Dozen is the closest thing we’ve done to a musical episode so far, but we do have ideas for a one-off musical episode, likely in the form of a rock opera.

If you could have one patient in the hospital who would it be?

Now that Michael Jackson is dead, that is a tough one to answer, but Cher comes to mind, as does Lindsay Lohan.

Do you watch any other webseries? If so, which ones?

loved the first season of “The Guild” (that’s all I’ve seen of it), and I thought Zach Galifianakis’ “Between Two Ferns” was really brilliant.

What’s the most challenging thing about making a webseries?

Finding time and money. The rest is all just a blast, even though it’s a lot of hard work.

I have Loveable Robot in my living room, so I guess he would probably win by default, since he’s easy to grab and a Giant Internet Monster is eating my house, for crying out loud!

Just get started. There’s plenty of time to perfect your work as you go. Video is malleable and cheap, and the internet is like a giant test audience just waiting to tell you what they like and don’t like. Don’t be afraid to challenge people, make them think, piss them off. Failure can spawn some useful lessons.