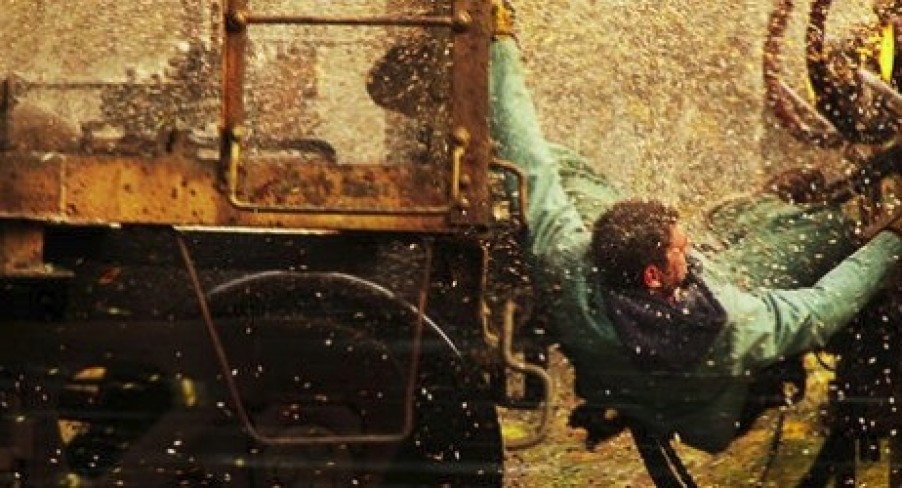 Granted, I know how this films looks. My first thought was ‘Oh dear Lord no! Now we’veSpeed on a train’ and upon learning Tony Scott was director, the guy who also did The Taking of Phelam 123… Pause for a yawn… and Man on Fire. I wasn’t in the least bit impressed. I somewhat expected Washington to be some *ahem* unstoppable figure much like the types of characters Bruce Willis plays over and over again. But low and behold, Scott may have just made his second interesting film; the first that I’m alluding to is Enemy of the State.

The story gets off to a slow start as we meet Chris Pine (Star Trek) looking forlornly at his missus and child, then he drives to get settled in his new job as a train conductor. Meanwhile (and there’s always a meanwhile in these types of films), Ethan Suplee, Randy from My Name Is Earl, plays an incompetent worker who doesn’t set the lever in the correct position before exiting a train that’s carrying a cargo of toxic chemicals. He fails to climb back on as it picks up speed which, of course, leads to one of the main obstacles for ordinary train workers Pine and a man armed with charm, Mr. Denzel Washington. There’s just something sweet and comical about Denzel giggling over a chit-chat about his daughters working in Hooters, admitting he’s used to it. The unlikely duo manages to keep tensions high with a bit of bonding and sarcastic humour throughout – one thing Washington’s always had a knack for. The rest of the cast includes always arrogant Kevin Dunn (Transformers) and Rosario Dawson (Sin City) who isn’t exactly your average plain Jane but manages to pull it off here where she plays a sort of behind-the-scenes character as the yardmaster who is trying to aid Washington and Pine in stopping the unmanned train.

Scott manages to pull off a film that has you both simultaneously smiling and biting on your fingernails as Pine and Washington set out to be heroes providing us with one of the better action-thrillers of the year.