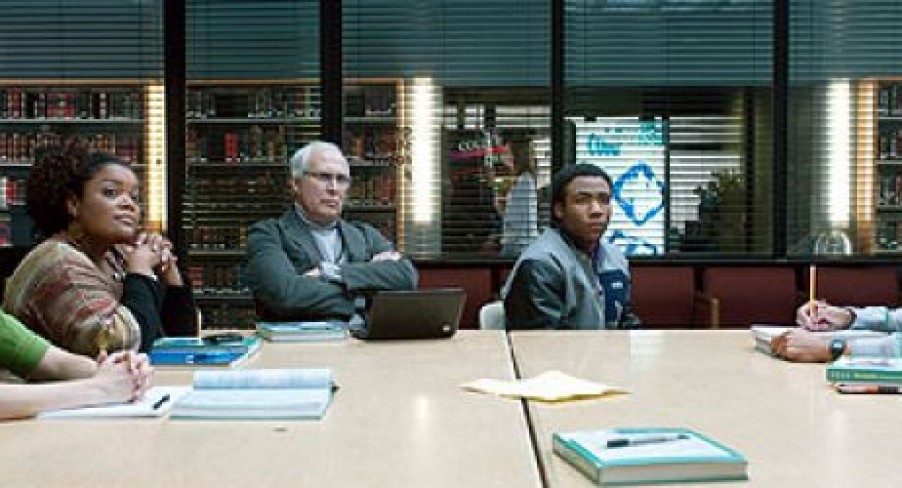 Pop Culture Monster recently discovered the joys of Community, and has been seen pushing the show onto everyone and anyone he meets. He’s like a drug pusher, but with hilarious American TV. One of our favouritist characters from the show is Shirley. Shirley is played by Yvette Nicole Brown. And this is her story. Sort of. Well, we talk Shirley,

What’s a typical day on the Community set like?

Did you know from the outset how popular and absolutely hilarious the show would be?

I thought the show was funny from the first time I read the pilot. But I never knew we’d have such an awesome fan-base. It’s mind blowing.

What’s it like to work with the veritable comedy legend that is Chevy Chase?

Chevy is a cool dude. We all enjoy working with him. You forget that– like his SNL weekend update sign-off–“He’s Chevy Chase and you’re not” after a while!

How does Shirley feel being the only woman in the group who hasn’t kissed Jeff?

I think Shirley’s okay with it. I, Yvette, am a little bummed! Lol! But my McHale time will come, if only in a dream sequence. 😉 All kidding aside, all the guys are like brothers to me now, so kissing any of them would be really weird at this point. You teamed up with Annie when you were given the task of being security guards. What was it like have a teammate? Would you like Annie and Shirley to team up properly like Troy and Abed?

I love working with both of the girls so it’d be great to team up with either one of them in a future episode. I do think Shirley & Annie are pretty funny together, though So hopefully before this season is up we’ll get another chance.

The show has become known for the parody episodes. Will it continue this way?

I don’t know what the writers have planned for sure, but I think the rest of the season may be a little more scaled back, in tone. But again, that’s just speculation on my part.

What was it like working with the legend that is Betty White? Is she as nice and as funny as she seems?

Betty White is everything you’d imagine her to be. She’s funny, kind, professional, a bit naughty and super sweet. I LOVED working with her!

If you could play any other character on the show, who would it be and why?

I’d probably be Dean Pelton (played by the ridiculously funny, Jim Rash). It was an easy choice! The Dean is my favorite character and Jim seems to be having a ball playing him. Of course I could never do him justice. Jim is genius! I would describe Shirley as a sensitive, devout Christian with moments of possible rage issues. Would this be right?

That’s exactly right! Lol! As for the rage issues, we will find out soon why Shirley is the way she is.

We’ve seen Shirley become a lot less one dimensional over the course of the series. What’s next for her character?

We meet her ex-husband, played by Malcolm-Jamal Warner and I think thru their relationship we’ll understand Shirley a little more. Also more secrets from her past are revealed.

Has everyone morphed into their character yet?

We’re all quite a bit like our characters in one way or another and it’s always been that way. 🙂 No morphing needed.

The show is also becoming known for its musical moments. Particularly Troy and Abed’s bits. However, Shirley got her chance with Sensible Night. Any more in store for Shirley this season?

We all sing in the Christmas episode. Other than that, I don’t know of any specific plans.

Do you reckon anything will come of Dean Pelton’s fascination with Dalmatians and, more and more over the series, Jeff?

I have no idea, but I hope none of it is resolved or explained. 🙂 The Dean is such a weird, little man, it’s fun to see those quirks pop out!

I’d save my family pictures.