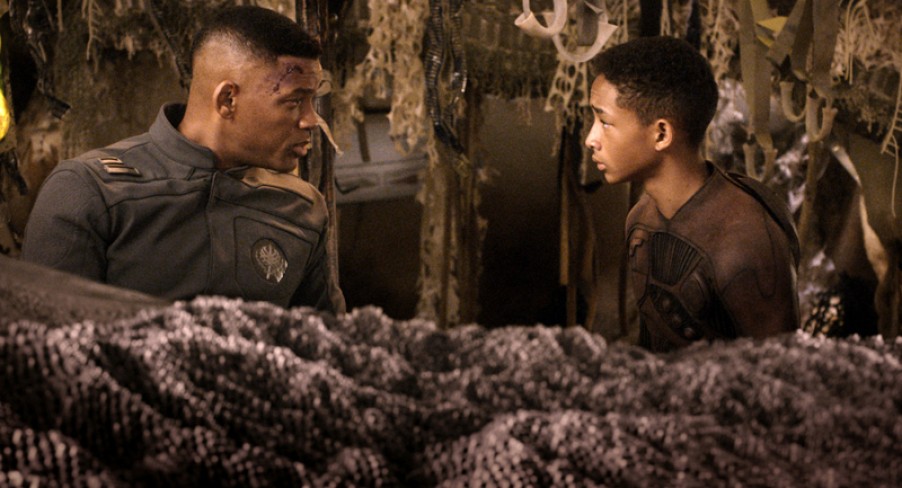 Will Smith comes up with a story for a movie he can be in with his son. Will, his wife and his brother-in-law are producers. Then M. Night Shyamalan comes in to write the screenplay (along with Gary Whitta) and direct. The only reasonable response to this set-up is “dear god why?”. This should be awful. M. Night Shyamalan has brought an actually good movie to the table. Which is frankly far more shocking than Bruce Willis being dead ever was.

After Earth is set 1000 years after humanity has had to abandon Earth due to a screwy climate and animal and plant life which has evolved to kill humans. They settle on Nova Prime, which is nice, until aliens invade. The aliens’ tactic is to drop a load of vicious creatures called Ursa that have been custom bred to hunt humans on Nova Prime. The Ursa sense by following the pheromones humans release when they’re afraid. Cypher Raige (Will Smith) is a badass soldier. His son Kitai (Jaden Smith) wants to follow in his footsteps. There’s a fair bit of tension between father and son, so they go on a bonding trip together.

There’s quite a bit of sci-fi going on there and plenty of opportunities for exciting set-pieces on the hostile planet. And all of that is done well. There’s even some surprisingly solid science floating about in the fiction. But all of that is just there to prop up the story of a father and son who can’t connect. Their past and their present are explored as we learn both the sources of tensions, even if that’s just the causes of character traits which clash. But through the film the trust and respect for each other grows, allowing the love which had only been glimpsed, to become a proper feature of the relationship.

Kitai becomes a man, which helps him understand the man his father is, and Cypher faces up to his inner demons, which he fears far more than outer ones. This allows him to overcome the barriers to his son. The performances from both Will and Jaden are great, with Jaden taking the lead from his father comfortably.

The environmentalist message you might fear isn’t shoved down your throat too hard either. It’s not so much a message as it is an acknowledgement of a simple truth as the film explores other areas. The 1000 years without humans has been pretty good to earth and the 4K camera captures the landscape perfectly, while the seamless CG makes it feel different to the wilderness we know now.

There’s a lot going on here that works, this is an expansive sci-fi movie pulled off with aplomb, but more importantly than that, it’s a small family drama that hits home.