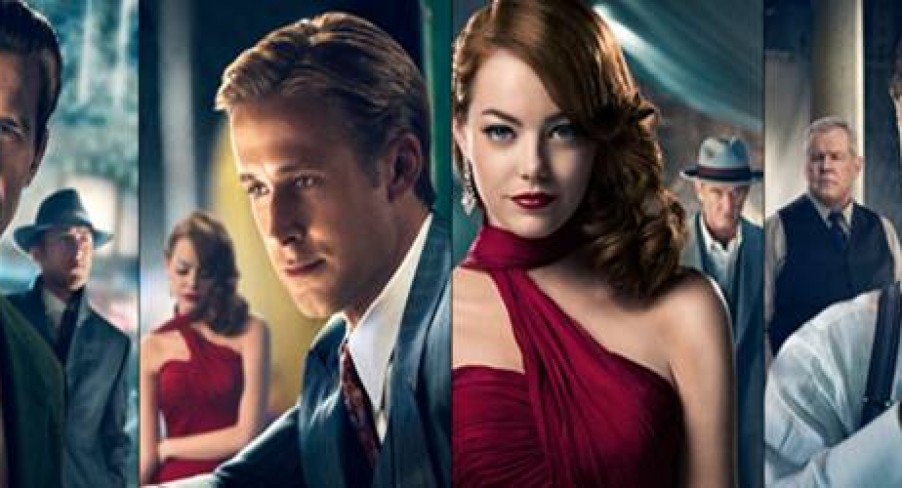 That is what you’re in for with Gangster Squad. The good guys fight the bad guys and it is brutal. When within the first ten minutes you find yourself watching a man’s hand getting crushed off his arm, you get a fair idea of what’s waiting for you.

An early monologue is a pretty good indicator too. It contains a shocking amount of cliché.

The plot follows Honest Cop John O’ Mara (Josh Brolin) as he forms a covert squad of good cops to take on the LA mob, headed by Sean Penn’s Mickey Cohen. The squad’s tactics are not to make arrests, but to attack Cohen’s operations and break his empire. They have a licence to kill, and Mickey Cohen is such an unambiguously bad guy that you don’t mind how violent they are about it.

The writing is quite weak, the dialogue is clichéd, as are many of the plot developments. The characters are thin and the preamble to each action set piece generally features plot holes. But those action set pieces themselves? They are tight. And the failings elsewhere are well disguised by the strong performances.

Ryan Gosling, in many ways, has the most character to work with. As Sgt. Jerry Wooters, he’s quickly established as a cop resigned to the mob’s dominance, but then he experiences some character development and is convinced to join the squad, though, in a rather clichéd manner. His character gets to experience more personal conflict and is tugged in more directions than the others. However, Gosling holds up well, demonstrating his talent.

This is in contrast with O’ Mara. Brolin’s character is quickly defined as a warrior with a strong belief in justice, and never really deviates from that path throughout the movie. A frequent comment by other characters is how O’ Mara’s biggest flaw is that he’s too much of a blunt instrument, and he needs to refine his tactics. But, if anything, O’ Mara just becomes blunter as the movie goes on. The lack of development is disappointing, but the visceral nature of O’ Mara’s bluntness is worth watching.

The stand-out performance comes from Sean Penn as bad guy Mickey Cohen. There are no subtle hints of humanity around the edges to display, Cohen is pure menace, and never has Sean Penn been more terrifying. In his hands Cohen is a vicious and angry animal, capable of ripping anything to shreds in his rage. Yet, even more terrifying than that, he can control that rage, reign it in or let it out, or save it up for a viciously effective outburst. In one scene Mickey becomes enraged at a restaurant, but is composed enough to catch himself from yelling too loudly, from making too much of a scene. It is this composure that is truly terrifying.

There are a distinct lack of female characters to be found. Of the mere 4 female speaking roles on offer (plus one bar singer); one is a maid with one line, one is a briefly appearing damsel in distress, one is O’ Mara’s wife, whose one dimensional character completely changes for one scene, and the last is Cohen’s moll, played by Emma Stone. Stone’s Grace Faraday is one of the more interesting characters on offer, but she is woefully underdeveloped. Stone gives a solid performance, but there is enough growth, strength and interest to have afforded her more screen time.

Stone is not the only actor whose performance you feel must have suffered through editing, the rest of the Gangster Squad are fairly marginalised too. Anthony Mackie’s Officer Harris is the definitive token black. You’d think that a black cop joining an elite squad in 1950s America would have brought in plenty of drama, but no, he’s just an extra hand on a holster. Interestingly race is tackled to an extent, but in Michael Peña’s Detective Ramirez, who seems to have been included purely so the rest of the squad can pat themselves on the back for not being (too) racist about his latin origins. There probably was an arc developing between Ramirez and Robert Patrick’s gunslinger, but it got left on the cutting room floor. Giovanni Ribisi finishes off the squad as “the brainy one”. Ribisi was fortunate enough to feel rounded off though, he had a whole two parts to his character.

These flaws are pretty easy to let slide however as director Ruben Fleischer shows that he can handle action as well as he did comedy in Zombieland. He also manages to up the blood content from that one. Zombieland was funny violence, this is just plain violent. With violence done excellently and directed at bad guys, the good guys are easy to cheer on.