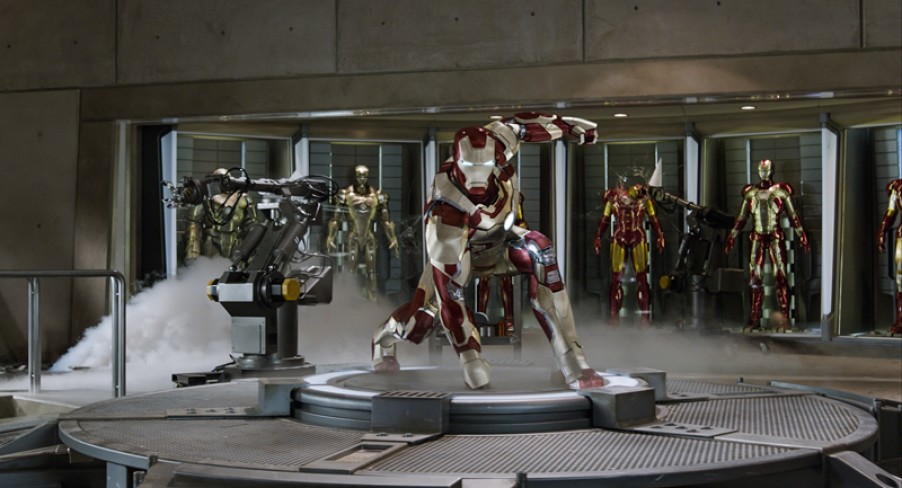 This time five years ago, Iron Man hit cinemas. It was Marvel’s tentative first step toward achieving their pie in the sky idea of making an Avengers movie. The path toward that goal became known as Phase One. Iron Man depended on Jon Favreau, a director who most people knew as the rich, Ultimate Fighter whom Monica dated on Friends, and Robert Downey Jr – a man who, while respected, was known for partying too hard and wasn’t considered capable of leading a franchise. Marvel’s first step wasn’t considered doomed from the start, but it was always a far cry from a sure thing.

Five years later and the Marvel Cinematic Universe is one of the most successful franchises ever launched and The Avengers movie is the third highest grossing movie of all time. So naturally it’s time to do it all over again with Phase Two. Except this time in two years instead of five. And once again it all kicks off with an Iron Man movie.

So do things kick off in high fashion? Well, no. Iron Man 3 struggles in quite a few areas. It’s not a bad movie, even among the high standards of Marvel. It’s still better than Captain America or the canonically ambiguous Hulk movies, but it’s certainly nowhere near the heights of Thor or the other Iron Man movies.

A lot was riding on new writer/director Shane Black. Black is a great filmmaker. Indeed, when Marvel announced he was helming this movie it was fairly rapidly acknowledged that he was a perfect match. But Marvel’s success has grown from choosing directors no-one expected. Jon Favreau came from relatively nowhere, Kenneth Branagh seemed a bizarre choice to lead a spacefaring superhero tale, even Joss Whedon was worried about on The Avengers due to his relative inexperience in film. He’d only made one feature previously after all. Louis Leterrier and Joe Johnston have been Marvel’s least bold directing choices, and have also been the men behind the lower end of the Marvel movies.

Shane Black’s stamp is seen all over Iron Man 3, most obviously in the fact that the film is set at Christmas. Black’s favourite time of the year (see Lethal Weapon, The Long Kiss Goodnight, Kiss Kiss Bang Bang). But there’s also plenty of Black’s offbeat humour to be had, resulting in plenty of laughs. Many of these laughs work, but others seem a bit out of place, as if in the interest of continuity, Black has tried to write in some Joss Whedon jokes, instead of sticking to his own style.

Black’s got plenty of experience and talent in writing action, but comic book action doesn’t seem to gel well with him. One sequence in the middle of the film has Tony Stark infiltrating an enemy camp using improvised gadgets. It’s a fairly well pulled off sequence and the kind of thing Black does well, but it doesn’t really make sense for Tony Stark to go all stealthy one-man army. There’s a great dichotomy and source of drama to be had in Stark’s lack of ability outside the suit, many great writers have addressed (even the “A genius billionaire playboy philanthropist” line in The Avengers addresses it). But Stark conducting covert ops doesn’t really work.

This kind of departure from character is just a little jarring for fans of the movies, fans of the comics will probably take bigger issue with it, or they might be distracted by other departures. One particular bait & switch, which arrives at the end of that covert ops sequence, might have fans of the comics up in arms. But the real problem with that bait & switch is that even within the confines of the movies, it’s a fairly huge plot point to include almost purely on the basis of an only ok gag.

Black has apparently made an effort to address the Stark/Iron Man identity crisis, but most of it seems to have been lost in rewrites. It seems to be a big issue Stark had been grappling with when the film’s resolution comes, but it’s not really something that even registered throughout the film.

Similarly, Stark’s struggle to wrap his head around the events in New York during The Avengers is another presumably big strand, but really it only crops up awkwardly and intermittently. Indeed, when Stark’s difficulty dealing with it is first mentioned it feels like one of the most crudely tacked-on/shoe-horned in moments in cinema history. As if Black wasn’t really interested in writing that theme, but a producer made him, so he shoved it in half-heartedly.

The biggest problem with Iron Man 3 however, is its villain. In Phase One Marvel smartly developed the science of the Marvel world, gradually pushing the envelope, making things a little more advanced than reality until finally the near mystic science that appears in Thor can be given enough of a scientific grounding to gel. By the time we hit The Avengers, things are really over the top, but it’s been built up gradually so it works and makes sense. The threat in Iron Man 3 however, is just stupid science.

The weapon the villain has created is absolutely ridiculous and makes a mockery of the whole film. It’s over the top fantasy that, while certainly comicky, doesn’t work in the slightest in the film. Couple this with the poor characterisation of the villain and you’re left with a bit of a damp squib.

The villain’s goals are explored, your basic political power/mountains of money combo, as are his methods, but it’s a villain devoid of motive. The only motive hinted at is; awkward young man grows up to be cool and confident and wants to take revenge on the people who were mean. But becoming cool and confident means leaving the awkward guy behind. Cool and confident guy is already successful. There’s plenty of legal corporate revenge to be had without going for high treason and crime of the century explosive shenanigans. The villain just doesn’t make any sense.

Not that the film’s all bad, the jokes are by and large funny, the nature and direction of the threat make it work that Iron Man gets involved and challenged without calling in backup from The Avengers. The action sequences provide plenty of spectacle. In particular the climax featuring bad guy army versus army of Iron Man suits (though the army means that the suits end up looking far more fragile than they ever have previously), there’s also an excellent sequence of Iron Man rescuing a bunch of people who’ve just fallen out of a plane, possibly the stand-out sequence of the film (though even that seems to have had about 20 seconds too much shaved off in editing).

Iron Man 3 might be disappointing to Iron Man fans, but not necessarily to Marvel fans. It’s not the worst of the Marvel films (and given the standard of Marvel, even if it was the worst, there’s still plenty of room to consider that good) but it’s not the launching pad to Phase Two which the first Iron Man was to Phase One. Roll on Thor.