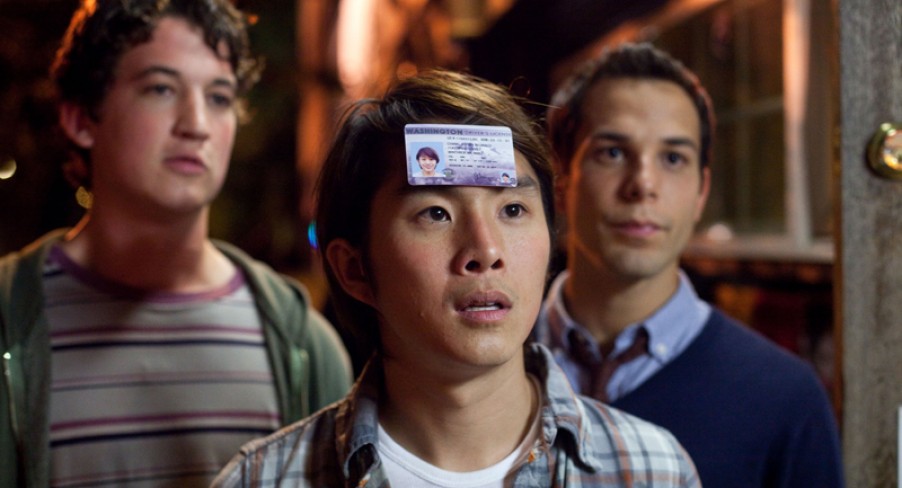 The Hangover was a teen movie for adults, and now the writers of The Hangover have come out with The Hangover for teens – or young adults, at least. It reverse engineers the genre to a large extent, so it’s shocking how many of the tropes and clichés of teen comedy the writers have managed to squeeze into 21 & Over.

The story is quite simple, three pals reunite as one of them turns 21. They go out and get hammered but the birthday boy, Jeff Chang (Justin Chon), gets too drunk so Miller (Miles Teller) and Casey (Skylar Astin) have to get him home. But there’s a snag, the reunion has happened in JeffChang’s university town, and Miller and Casey don’t know his address. Cue a quest through college clichés to find JeffChang’s house.

Step one on the cliché trail is a nighttime raid of a sorority house, before the night is through there will also be a dorm party, a pep rally and a last minute dash to get to the big interview on time. Most of the scenarios are peppered with enough jokes that it’s still funny even if you’ve seen the set up a hundred times, but there are some clichés that are a bit too much. Case in point being the Asian father putting too much pressure on his son to achieve in his academics. That particular cliché is borderline racist.

It’s all sold pretty well with strong performances and solid jokes though. A strong sub-plot sees Casey falling for a friend of JeffChang’s. Love stories in one night rarely ring true but this one does because of the fantastic performance of Sarah Wright as Nicole – said love interest. There are emotions and meanings which should take pages of dialogue to convey, but Wright gets them out with a squint and tilt of her head. She’s so strong that she improves the performances of everyone around her. More gets said simply by having her in the room.

Not that the other performances are weak. It’s generally solid work all round. Astin sells the serious minded Casey in need of lightening up and Miles Teller sticks to the kind of role he’s done before, a loudmouth slacker. He’s just louder here than usual. His character can be quite irritating at times, but that’s down to how the character’s written, not Teller’s performance.

21 & Over doesn’t exactly suffer from being formulaic, indeed, it uses the formulas quite well. Don’t expect this to open up whole new avenues of comedy, but it’s safe to expect to laugh.