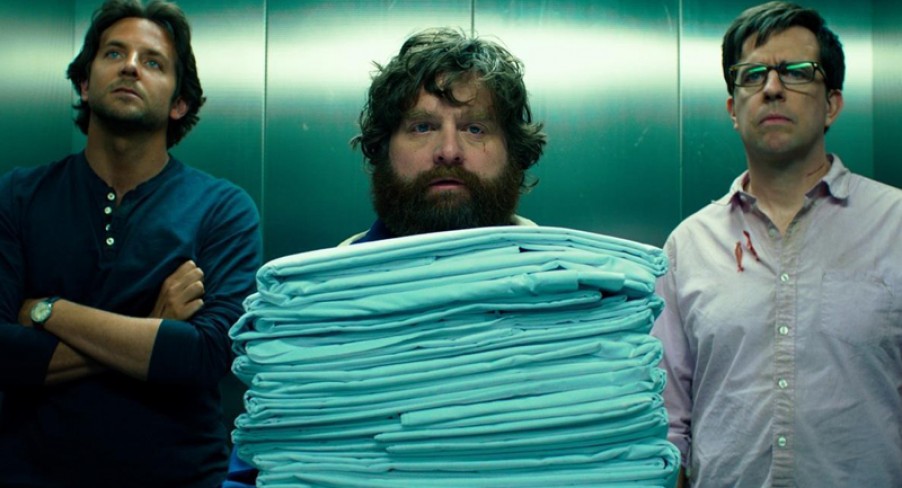 The Hangover is still the most successful R-Rated comedy of all time and according to a recent poll by Empire Cinemas for World Laughter day, it’s the funniest film of all time, gathering over half of the vote.

And yet, The Hangover: Part III has not been an exciting prospect. This is largely due to the godawful The Hangover: Part II, one of those rare sequels which is so bad that it actually makes the original look bad too. The biggest problem with Part II was the plot. It was lazily structured and barely coherent, but it’s the plotting that gets all the focus in Part III.

So does this fixing of past problems lead to a return to glory? Not even a little bit.

The Hangover: Part III has a solid (comedy) plot. When Chow (Ken Jeong) escapes a maximum security Thai prison, a gangster in the form of John Goodman seeks to hunt him down to get revenge for the $21 million dollars Chow stole from him. But Chow’s proving difficult to find, he’s only had contact with one man; Alan (Zach Galifianakis). So Goodman’s gangster kidnaps Doug (Justin Bartha) and sends the wolf pack to find him. They have three days.

It’s nice to see a move away from the original gimmick of retracing a drunken night out, while that was successful the first time out, the sequel thoroughly killed that idea. Tracking down Chow is an effective new maguffin. There is a bit of retracing though, the plot is surprisingly heavily mired in details from the previous films, so much so that there’s a fairly clunky bit of exposition as the past films are recapped.

The resulting plot is solid, it’s not mindblowing, it’s just strong enough to support a comedy without much by way of holes. Unfortunately the writers were so satisfied that they got a solid plot together that they forgot to put in much by way of jokes.

The laughs are pretty infrequent, and far too many of the jokes feel forced in, as if the writers realised that they’ve gone way too long without a joke and hamfistedly squeezed in anything they could. An early fighting cock rampage is a pretty good example.

Don’t hold out much hope for finding laughs in the performances either. Pretty much everyone phones it in. Even Galifianakis makes his usual quirky character look tired and dried up. He only really turns it on for a few brief scenes with Melissa McCarthy. Though director Todd Philips seems to have taken those good moments as licence to drag them out.

All in all, it’s a pretty lazy film, even with a decent plot. While certainly better than the second film, this is definitely a hangover best forgotten.