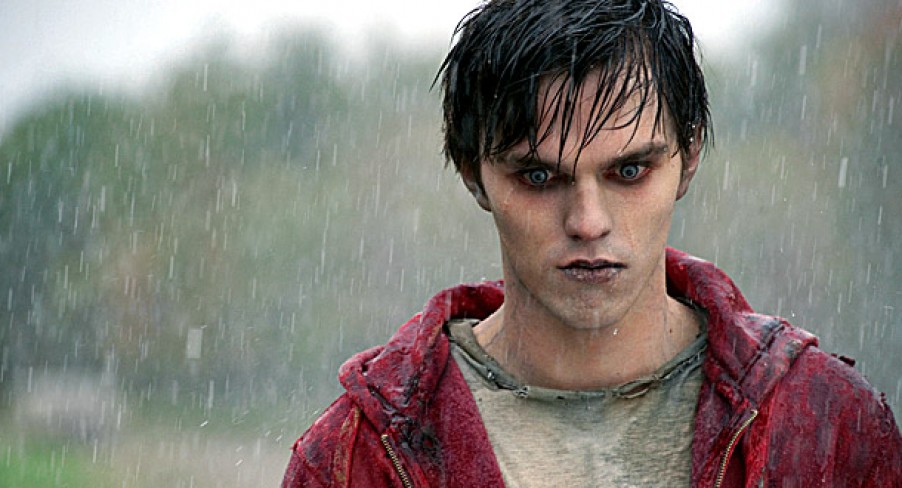 R is an awkward, shuffling teen who finds it difficult to talk to people. Mainly because he’s a zombified corpse. As metaphors go it’s about as blunt as you can get. Warm Bodies follows R (Nicholas Hoult) as he starts to make a connection to a living, breathing girl – Teresa Palmer’s Julie. The film’s themes of falling in love, reviving the dead, and broken hearts is remarkably obvious. It’s a wonder we haven’t seen this kind of zombie movie before. At a time when the zombie genre is starting to wear thin, this looks like it should be a sub-genre which is even more done to death. Instead Warm Bodies is a fresh spin that’s done so well that it will keep zombie appeal alive a bit longer.

There are very few departures from standard zombie lore, the biggest one is that on occasion the zombies can squeeze out a word or too. It’s easy enough to accept a few syllables here and there, but as R works harder to connect with Julie, he starts squeezing out more and more words. Given that this is something that goes against our now deeply ingrained understanding of how zombies work, it’s hard to adjust to. It’s not like a zombie ever gets to the level of using coherent sentences, but the amount of talking is just enough to clash with the suspension of disbelief.

Then again, seeing as zombies are an entirely fictional creation, it’s a bit silly to get caught up on a detail of how zombies behave in this particular take.

In general it’s quite easy to connect with what’s going on. Given the difficulties involved, the development of a relationship between R and Julie is done remarkably well. Once it is established that R is capable of fully coherent thoughts (as evidenced by the fact that he narrates the film) it makes perfect sense for R to want to connect with Julie. There is an initial moment of attraction which is then compounded by an ingenious method of R really getting to know Julie.

For Julie’s part, she’s obviously going to be far more hesitant and wary of connecting to R, but the relationship is gradually developed, with each step helping to sell the bond. It’s not a smooth path, some things the pair get up to don’t make perfect sense, but the fact that the pair bond over their experiences together does work.

A lot of this is sold through the soundtrack, many of the songs are those which it is very easy to fall in love to. Songs that remind you of what being a teenager falling in love  for the first time is like. R and Julie can bond over music and listening to records, and the music itself really sells the love to the audience. The music can be fairly blunt at times, but it works. Rarely has a soundtrack been used so well to sell a movie.

The zombie = awkward guy metaphor, along with numerous other obvious metaphors already shows a lack of subtelty. But none of this matters. Metaphors don’t need to be ingenious and quirky to make their point.

Many people may be wary of zombies, not being fans of horrors perhaps, but this is not a horror, it’s a romantic comedy. There is some threat and violence but it’s 12A, there aren’t any gory bits or truly terrifying moments. There are scary baddies, but they’re an obstacle of love not a method to make an audience crap their pants. That said, some would be wary of romantic comedies, but there’s enough zombiness here to avoid that being a barrier either. This is not a sappy Gerard Butler movie, it’s a date movie that neither party should feel dragged along to.