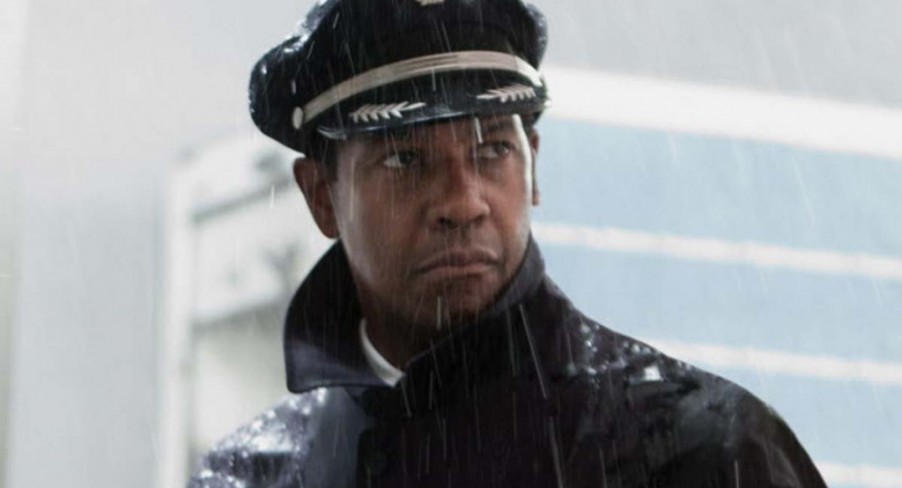 The story follows airline pilot Whip Whitaker, played by Denzel Washington. Very quickly we’re shown that Whip is,  to say the least, a fan of drink, drugs and sex. Fortunately his intake of narcotics doesn’t seem to affect his capabilities. When a plane he is flying malfunctions Whip displays remarkable cool headedness and ability. He manages to save 96 of the flight’s 102 passengers and crew by taking control of a crash landing. There is no doubt in anyone’s mind that Whip’s actions saved the 96. Everyone is of the conviction that no other pilot could have matched Whip’s ability and would have killed everyone on board. Later on, these convictions are actually tested and there are facts and figures to back up the belief that Whip is a goddamn hero.

Unfortunately, as a toxicology test taken while Whip recuperates in hospital shows, Whip was also hammered and high on cocaine at the time. As the airline, plane manufacturer and maintenance crew all battle to shift the blame for the loss of 4 passengers lives away from themselves. A drunken pilot looks like an easy scapegoat.

Fortunately Whip has his friend and Union Rep Charlie Anderson (Bruce Greenwood) and lawyer Hugh Lang (Don Cheadle) on his side. But as Whip starts to confront his substance abuse, there’s only so much ‘on his side’ they can manage.

In many ways Whip’s substance abuse isn’t a problem, it doesn’t affect his job performance, his still a perfectly functioning pilot, but the whole scenario brings Whip face to face with how he is perceived, and how he relates to other people. The fact that he can still do his job excellently doesn’t matter a damn if he’s the pilot who was drunk when his plane crashed and 6 people died. His friends will struggle to stay by his side, he will ask friends to lie on his behalf, and he struggles in a new relationship with recovering drug addict Nicole (Kelly Reilly).

It’s all fairly heavy stuff but dealt with lightly enough that it’s not a strain to sit through, unfortunately it doesn’t grab you very strongly, either. The early plane crash sequence is amazing. It’s good old fashioned, edge-of-your-seat stuff, full of little details that drive home its grand and cinematic scale. You spend the rest of the film waiting for something as gripping, but nothing comes.

Much has been made of Denzel’s Oscar nominated performance, but really it’s just Denzel being Denzel again. This isn’t the kind of powerhouse performance which many describe, though it is solid, and there are some excellent moments. One scene in particular stands out when Nicole comes home to find Whip drunk on the couch. Denzel’s drunken stupor is perfect.

The relationship with Nicole doesn’t really work as a whole though. It makes sense for them to befriend each other, that’s built up quite well, but when they develop beyond that it feels more like Nicole is making a stupid mistake and Whip is just drunk enough not to engage his sense to stop it. There’s never any real chemistry there. Nicole’s role is important to the tale, but it would have been more effective if it was the role of a new friend, rather than a new partner.

Flight is the tale of a man coming to accept the fact that he has a problem. It’s a well told story, it just doesn’t grip quite as hard as you’d like.