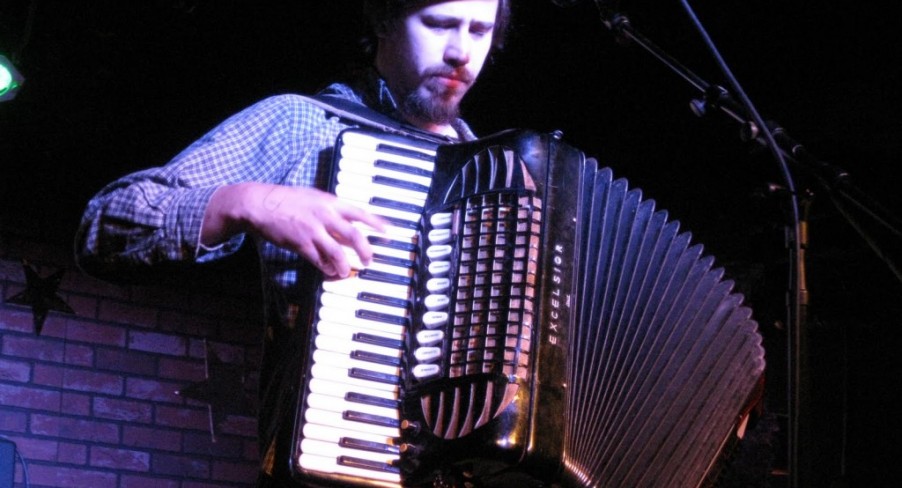 Jason Webley likes the number 11. Today is the 11th. Coincidence? I think not. It’s a prime example (get it? Prime?!) of the world and its ways all magically coming together to form a wonderful cacophony of awesome.

With that out of the way, we’re talking to Jason Webley this week. Best known as the geeky/cool acordian-playing singer-songwriter and as one half of the very famous Siamese twin act Evelyn Evelyn. He’s Evelyn. We sit down with the man to talk natural disasters, AFP and touring.

When the news that you’d be doing an interview was passed around the office, a lot of the female staff and others asked if you love them or if you’ll marry them. What’s the weirdest thing you’ve been asked by a fan?

Hmmm…  I suppose in some ways people have brought some pretty crazy and sometimes intense stuff to me.  None of them are short stories or stories that are easy to tell publicly, but I can say that many of them have had to do with people’s processes of grieving the loss of someone.  I hadn’t thought much of it, but I remember at some point Amanda Palmer and I exchanged crazy fan stories and mine were staggeringly weirder than hers.  But generally the people that my music attracts are good people and the things that get asked are me all feel somehow natural.

Please tell the members of your staff that I’m not sure if I’ll be able to marry all of them or if I even love them, since I don’t really know who they are.  But please assure them that in a very broad general sort of way I love and marry them very much. Provided no more natural disasters get in your way, will you be returning to Dublin in person?

Did you hear I was just in the Christchurch earthquake?  I was also in Tucson when the shooting happened in January.  It has been quite a year so far.  But so long as nothing gets in my way, I have Dublin penciled in on my calendar for the end of August.  I just need to figure out the right venue.

When trying to arrange a gig in which you would be portraying the second half of a Siamese twin musical duo via a webcam and a giant screen, did you at any point think, “This isn’t going to work”?

Well, the whole idea was so ridiculous and so unlikely to work that it didn’t matter.  That’s the nice thing about something like that.  When you are up against completely impossible odds, and if you have the audience on your side even a small victory becomes a huge victory.  It ended up being a fun experiment.  I was really glad that I was able to make it across a few days later and join the tour though.  It was pretty miserable to finish the show and be alone in an apartment in Brooklyn instead of talking to friends and fans and pretty girls after the show.

Is there any way of telling Evelyn and Evelyn apart?

If you look really carefully their birthmarks are on different places.

What’s the most difficult part of being a Siamese twin?

You don’t always agree on everything.  But you have to agree. Which Evelyn is your favourite?

The one on the left is pretty cute.  I like her beard.

It is really nice working with her.  She’s an amazing songwriter and a great friend.  She also challenges me in a way other people don’t.  I’ve done a bunch of collaborative songwriting with a bunch of people and usually I sort of lead the process and whoever I’m working with lets me get away with a ot of crap.  But anytime anything bugged Amanda – a chord, a lyric, a decision that wasn’t clever enough or that was just too lazy – she’d stop everything and be “we need to fix that now.”  I’d be “we’ll try to think of something better later.”  And she’d insist on fixing it right then.  It infuriated me a bit, but I also liked that a lot.  I was more passive in my criticism.  She always knew when I didn’t like something because I’d just get really quiet and wave my arms around in the air like a broken puppet while I tried to say anything.

Occasionally when working with her, people call me Jason Fucking Webley, which I don’t care for so much.

What made you want to become a musician?

I didn’t want to be a musician.  My plans to work a boring desk job didn’t work out.

What are you working on right now?

I have about 10 more days off before my next big US tour starts – about 60 shows back to back with no nights off. These are pretty much my only days off this year, but I’m stupid busy finishing the details for a few of those shows, and promoting that tour, finalizing a live album that was supposed to be out by now, working on the artwork for that album, buying a new touring car (my trusty Tomato died in January), building a new houseboat and trying to see my friends and family a bit. Oh and I’m planning a European tour, a bunch of fun events for the summer and a huge hometown show on November 11.

You can download/get CDs of all Jason’s music direct from the man himself here.