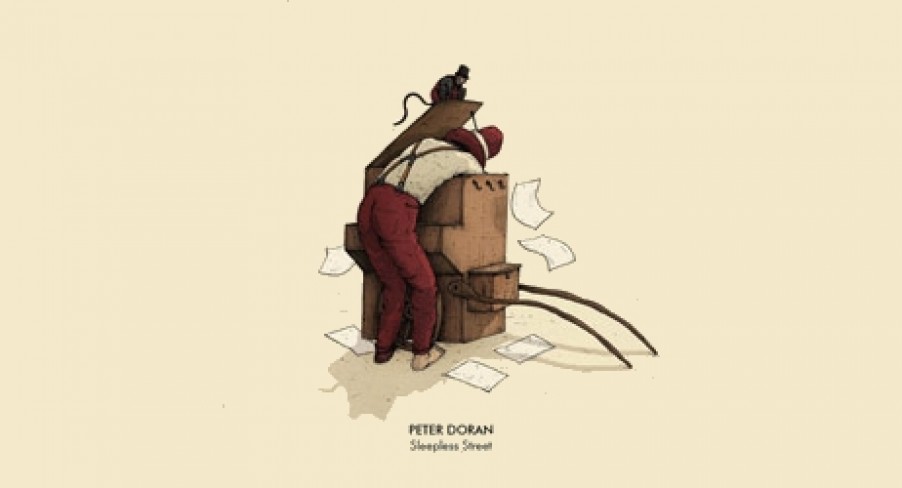 Sophomore albums are a bit of a crunch point for everyone involved. Will it live up to the first? Will it succeed? Will it falter, and we can now write them off as yet another one album wonder? It’s all a little overwhelming for a lot artists, and the sophomore slump can usually be attributed to the fact that they’ve spent much more time writing and perfecting the first record than its follow up. Peter Doran released Sleepless Street, his follow up to 2006’s Wood, in physical form on September 10th.

Firstly, just looking at the album, Pop Culture Monster must note the wonderful album art throughout. The hand-drawn cartoons are absolutely brilliant and give a real sense of what the album is about.

The opener Hunter’s Sketches kicks off the album with a strident, rock inspired, pumping track which doesn’t so much set the tone as it’s followed by the more mellow, Mic Christopher sounding Sacred Place which is quite radio ready.

The track Pathways could be a David Gray circa White Ladder era track, and is one of the more lyrically arresting of the whole album. The guitar riff is catchy and the more mellowed use of the cello works to its advantage. If this isn’t a single, Pop Culture Monster will eat his own paw. When You Can is a beautiful lullaby. It has an air of a Christine McVie penned tune about it. A twinkling piano melody, salient cello accompaniment, reserved emotion filled vocals and beautiful lyrics all contribute to a song that, although won’t transfer outside an album, really stands out for Pop Culture Monster.

Twisted Freak harnesses Peter’s blues folk songwriting, and is one of the less polished tracks on the album which adds really well to the feel of the track. Even Peter’s vocals seem a little more gruff.

The title track Sleepless Street comes right at the end, and runs just over an epic 7.5 min. I thought just looking at the length of the track that it would be one of those filler tracks that you skip over because they drone on and on and… it’s anything but. It’s a stunning, harrowing ballad about a girl called Allison. It’s one of the most lyrically beautiful songs Pop Culture Monster’s heard in a while. And everyone knows, if you can keep Pop Culture Monster interested for a full 7mins, you’re on to a winner.

I can’t help but draw comparisons to Mic Christopher with this album, albeit a lot more polished. We’ve had a distinct lack of male folky singer-songrwiters that don’t suck in the last couple of years. It’s time for someone to hold the flame alight for the future, and Peter is Pop Culture Monster’s firm favourite for the distinction.

Overall this is a beautifully crafted album, with stunning instrumentation throughout which serves as a backdrop to Peter’s wonderfully emotive vocals. A highly commendable second album that will be on constant rotation on Pop Culture Monster’s iPawed. When You Can by PeterDoran