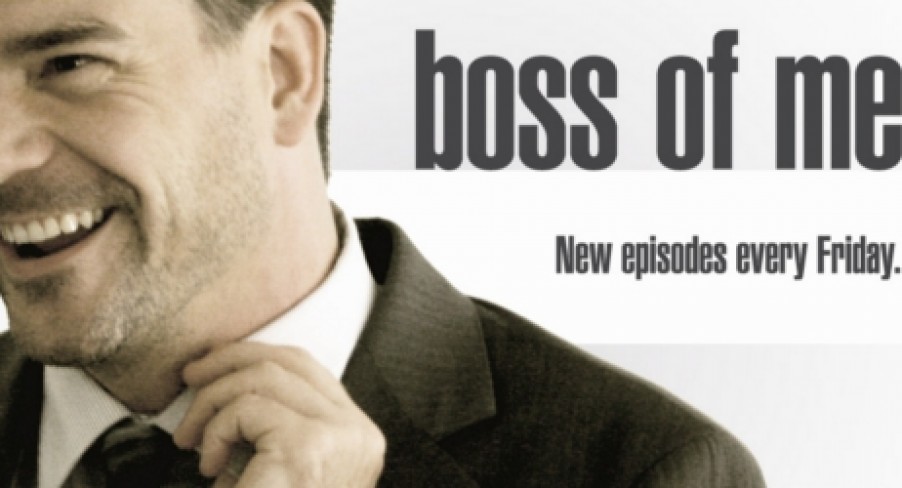 Boss of Me tells the story of newly instated Creative Director Bret Donovan after he is sent down from “corporate” to manage the independent production company SABI Pictures.  Let’s just say from the outset, this web series has comedy gold written all over it.

Bret is a self proclaimed “ideas man”. There is a hint of Michael Scott from The Office about him. He is often cringe worthy, yet never fails to make you chuckle. His speech on side-shifting as opposed to downsizing had Pop Culture Monster looking from behind his paws, and yet laughing uncontrollably. There’s a real balance between the cringy and the funny. It’s also difficult to tell yourself that Bret isn’t real – he even has his own Facebook profile and blog. There was a lot of speculation about his authenticity when the series first aired which is understandable because the character is so believable.

A lot of the dialogue is improvised, which is surprising given the high quality. You really couldn’t have scripted it better. It is one of the tightest scripts Pop Culture Monster has heard in the copious number of hours he’s spent watching web series. It’s snappy and quick, which really works well on the web; nobody wants to watch long, overly drawn out character development or plot setting on t’Internet.

We gain insight in to the workings of Bret’s mind with his to-camera work, which is one of the strengths of the series as he gives the audience humorous titbits. His delivery is very much in the vein of a motivational speaker, which is further echoed in the motivational posters made to promote the series. Which brings us to one of the most interesting aspects of the series: the marketing, which is very innovative (something that isn’t often seen these days.) The series used a huge amount of promotional marketing. In fact it was indeed a marketing tool itself, albeit an unintentional one. First and foremost, SABI Pictures is real. It is in fact a production company. The series was utilised as a fun way for the creatives to interact and connect with fans of their films. It’s an innovative way of doing things, and fans don’t get smacked in the face with advertising, and don’t feel like there’s more take than give on the creator’s side: we get a brilliant web series out of it.

Tightly executed, excellently shot and really well acted, this series has really hit the ground running. If it doesn’t hit the big time, Pop Culture Monster will not be a happy monster. It gets some serious omnomnom’s of approval.

Below you can find an EXCLUSIVE 90 second spot from the show.

Pop Culture Monster also got the chance to speak to creators Kevin K. Shah and John T. Woods about themselves and the show. And of course Bret got in on the action too and sent us along his ever so humble bio.

I worked at an LA production company for 5 years and during this time I realized the idea for a comedy set in a creative production company was incredibly untapped.  I have always wanted to set a show in such an environment and this web series was a great way to do just that.  Working on Boss of Me, where principal photography is completed so soon after the initial inception of the idea requires an actor to be incredibly familiar with the character they are portraying.  As an actor doing improv, there is a lot of thinking on your feet — where we’d just set up situations and let ourselves run wild with it.  We’d roll with the punches, and stay with the characters no matter what was happening around us.  For example, in Episode 2, an Arrowhead delivery guy shows up in the middle of shooting to pick-up the water dispenser, in real life.  Not missing a beat, it turned into a scene that was happening in the world of the show.  And this delivery guy was a natural; he played his part perfectly by just doing his job.    The same thing happens later on Kevin’s wife and a delivery guy from India’s Tandoori, the restaurant next door.  Working in this way and staying loose can be incredibly rewarding — but it requires an incredible amount of trust in your follow actor/filmmaker to make it work.  Also, this process lends itself to a fast turnaround time, which is good because when it comes to the internet, things move fast, so you have to keep up.

We created the series to flex creative muscles while reaching out to fans by making them laugh (or at least smile) and poking fun at ourselves, our company and this insane business in general.  We also wanted to put a show out there for free (so a large investment in terms of money would have defeated the purpose).  All we hoped for (besides getting a few smiles) was audience interaction with our character Bret Donovan on Facebook, where the saga continues to take shape.  Though we batted jokes and ideas back and forth and jotted some of it down — much of what happened was spontaneous and unrehearsed.  Bret wanting to consolidate the wires in the office, for instance, began just as a warm-up exercise.  Creating and directing a show this way necessitated some unique solutions to technical problems as well — such as being able to follow Bret around untethered to give him the freedom to speak and move as needed.  For this, we took turns shooting scenes wearing a Cobb-Boom Helmet, which is a boom mic fastened on top of the shooter’s head to be able to get both the shot and the sound all at once.  Though this device is by no means a perfect or ideal solution — it is ridiculous and makes us laugh which must count for something. When I graduated from the University of Phoenix with a GPA of 3.26, I was hungry to get to work and to use my business skills to help a great business be even greater.  With my degree in Small Business Management & Entrepreneurship (and a minor in Spanish) I was able to basically step right up to the world of SABI Pictures and hit the ground running.   I have a lot of great ideas.  Not only for business but for films, and the team is always pretty speechless when I finish my pitches.  My latest is “The Thirst of the Undead”, a Vampire-Werewolf themed action-horror-RomCom set in the world of Pepsi, Coke and Fanta that involves Branded Content.  The Pepsi Vampires are out to destroy the Coke Vampires, but one of the younger females in the Pepsi Clan, falls in love with one of the teen-aged Coke Vampires.  What will come of these two young lovers?  Will they get to be together?  Or will the two factions destroy one another?  Oh, and instead of blood, The Pepsi Clan drinks only Pepsi – and the Coke Clan only consume Coca-Cola.  Also, there are Werewolves that drink Fanta, but I don’t want to ruin the whole thing.  Hit me up on the Facebook or the Twitter if you need ideas…