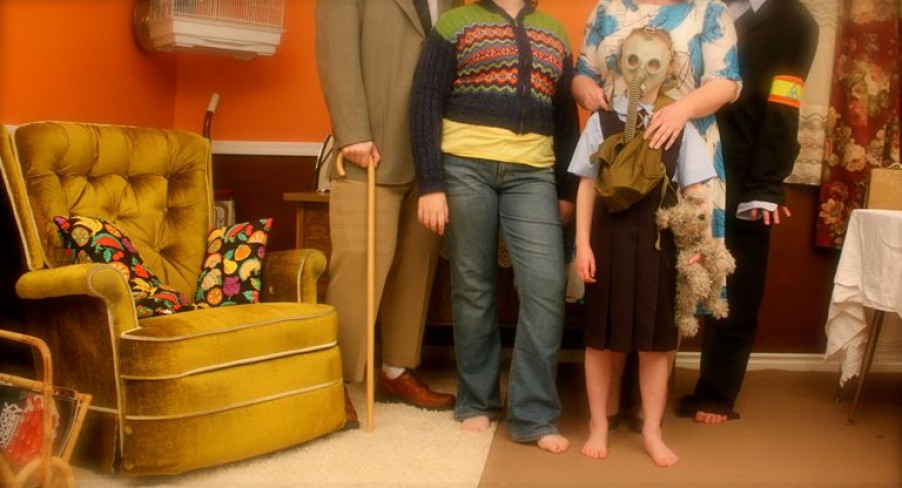 Mary and Paul Higgins are a British couple living in Canada, making web content. And it’s funny, original and on-the-ball. They’re an accomplished pair, with music, plays and web series all under their belt. Their newest project, Mind My Brains, Darling! is a “rom-zom-Britcom webseries” set in 1979. It follows the ups and downs of normal family life.

Can you tell us a little about the vision behind the show and why you decided to write it?

[M] Paul, is a huge zombie freak, er, fan, and one day he was hoovering (vacuuming) the front room in his usual lackluster fashion when he was struck by the fact that even a zombie could do a better job than him. At least, that’s how I remember it….

After the initial flash of the idea, it wasn’t too great a leap to imagine various scenes of domestic bliss with a zombie spouse. Zombie husband doing the washing – all the clothes covered in blood and soil. Cooking the food – just a pan full of brains and bits of raw meat. Digging the garden – slicing a foot off with a spade and so on.

[P] Then we talked about why someone would marry a zombie. Dating a zombie would be hazardous enough (and another series of sketches…) – so we thought it would work better if the couple were married before the husband got all zombiefied. In sickness and in health and all that…

Then came a long period of talking and throwing ideas about. As the concept and the universe developed some questions arose, like why the wife doesn’t get eaten or ‘how can there be domestic bliss during an apocalypse’, and ideas were worked around or thrown out or changed as required.

Then we set it in the 1970’s to remove all traces of it being like anything else.

The best thing about developing a new idea is that it can go anywhere you want it to. There are no rules. Originally, Petunia’s mum was a main character. We found it made things too complicated and so we just decided she wasn’t going to be in it anymore. Gone. It instantly removed a whole bunch of problems and made things much easier.

We’ve never seen anything quite like this and wanted to make it something really special. Zombies are awesome, but if you just have them stumbling around going “Grrrr…” (or “Brainzzzz”), then you have nothing new to offer and it becomes the same old stuff that’s been seen loads of times before. We wanted to come at it from a new direction, add a new angle. Add to the lore. [M] Building the world has taken some time, but the initial idea had us sparking ideas day and night for weeks. We finished Goodnight, Princess and within a month we were already starting to sketch out ideas for Mind My Brains, Darling!. We kept it under wraps for a while as we fleshed out the characters and details – this is all about the Worthington family, and Koenig with his band of merry Z-Force incompetents.

Once we had decided on 6 episodes (the traditional British sitcom number) we sketched out each storyline. Once we started writing we realized that because the episodes were intended to be stand-alone and non-sequential (you don’t have to see them in order) it would help to have a framework for each script. When we had that down, getting people in and out of situations became easier and they pretty much wrote themselves because we knew the characters intimately.  Mindmybrains.com has a lot of information about the world the webseries is set in.

[P] We’ve spent about 2 months refining scripts and storyboarding while building the set and running the Indiegogo campaign. Now we’re getting the shooting schedule sorted and should start filming in January. That’s a bit later than we’d hoped but we’ve had some tech issues to sort out, and as everyone says, the more time you spend in pre-production the less time you spend trying to fix it afterwards.

Things do take more time than you realize but we want the finished product to look its best. We are not from the film/TV/video industry but we think that shouldn’t stop people from making webseries – and making them look good. This is not just an idle hobby.