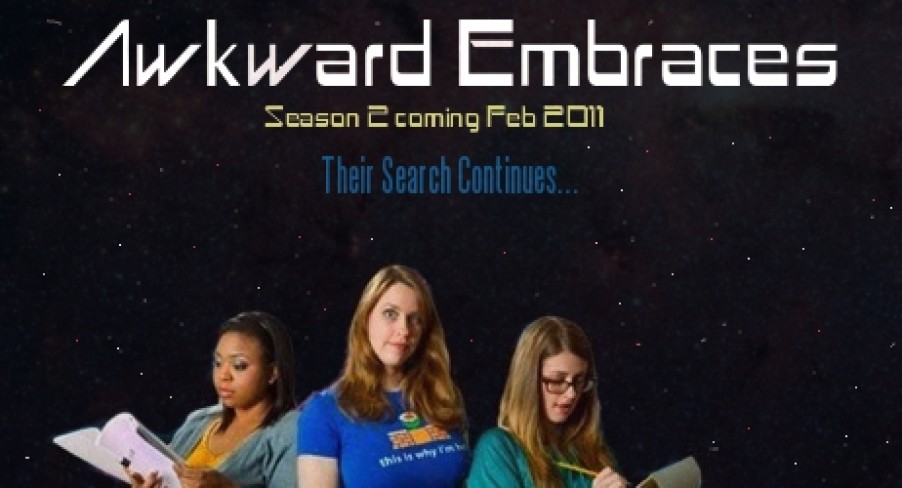 Extra! Extra! Read all about it: Awkward Embraces season 2 premiere is February 18!

When Pop Culture Monster found Awkward Embraces last September, he laughed his ass off and watched 8 episodes in a row. The series follows Jessica, Candis and Lyndsey as they blunder their way through a series of increasingly awkward dates. This week he sat down with Jessica Mills, creator and writer to talk Star Trek, Season 2 and serial killers.

An awkward embrace definitely involves the “ass out”. You know, where the top half is hugging, but the bottom half is repelled. There is also usually weird “bro pats” on the back included.

What’s the most awkward hug you’ve ever received/given?

Just last weekend a friend of mine came to my Tweetup.  I’d only seen him in person a few times, we mainly talk on Twitter. So he was going to kiss me on the cheek and I was going to hug, but our faces went the same direction so he ended up kissing me on the mouth weirdly while I was doing some sort of odd “bro pat” thing on his back.  SO AWKWARD.

What celebrities are most/least huggable?

Jennifer Garner seems super huggable. I love her.  Sean Penn is somewhat repellant. I can’t imaging feeling like I could hug him.  He’s a brilliant actor, but…not huggable.

What’s your favourite moment of Season 1?

SUCH A HARD QUESTION! I was actually talking to Adam about this today, though.  There is a moment in The Bulge where Lyndsey says “He sleeps in jeans” and then it cuts to Candis and I and we are making the exact same face.  It makes me laugh so hard because we did it completely unconsciously and it’s just so representative of what I love so much about working with those girls. There’s this easy symmetry between us.  We do the same thing in an episode for Season 2 and it’s so far my fave moment for the first half of season 2 for the same reason. How much of it is based on real life experiences?

All of it.  HA!  Sometimes it’s just a little thing. For instance, Episode #1: The IT Guy came from this one time at work when this super cute IT guy came in to work on our computers and all the girls (I’m the only single one at the front desk) were trying to convince me to flirt with him.  So I started thinking what the Awkward Embraces characters would do with a moment like that and the episode grew from there.  None of the episodes are straight up an actual experience with the exception of one or two, and even those are exaggerated for comedic effect.

Deanna Troi has the dodgiest accent of all time. Discuss.

For real, right?!  What is she doing?  Is she trying to have an accent? At first, I thought it was a Betazed dialect, but then her mom comes on and has no accent whatsoever.  Maybe her dad was British so she grew up with some sort of weird Madonna-esque half-accent?  No idea.  It’s odd.  I love her character, though. Great hair. I was heartbroken when I found out it was a wig.

Who would win in a fight, Kirk or Han?

That’s an excellent question.  It’s a tough one.  I can’t help but think it would be Han, because he would pull out a really dirty trick.  He is a scoundrel after all.

So what’s happening in Season 2? Go on, you can tell me, we’re friends.

Candis and Lyndsey make it their life’s mission to find Jessica the perfect mate.  So we keep seeing Jessica in these situations that she would never be in otherwise.  Candis and Lyndsey have their own stories as well, I’m hoping to start to grow and expand their characters more.  Candis actually wrote three episodes for Season 2 and they are tons of fun.  I’m very excited. He is not an actual serial killer, at this time. But you never know what kind of craziness will ensue in Season 3!  ha ha

Any advice to any budding webseries creators?

Send your scripts to honest friends who know how to write well.  The biggest problem with webseries is the writing, and I spent a lot of season 1 sending scripts to my mom and Adam and taking their notes to heart.  The writing and the casting are the most important things, so you have to make sure that your story and characters are good, then you have to find the people who can really pull it off.

What’s the most difficult part of putting a webseries together?

Funding.  For sure.  I did all of Season 1 almost for free, but if you want to have longevity, you have to start paying people.

How much do you hate the word “webisode”?

I’m not one of those web people who feels like it’s a dirty word, but I do feel that people who use the word “webisode” are a little behind the times when it comes to web entertainment.

My dog.  Though she’s a fierce little thing, so I’m pretty sure Pop Culture Monster would have a serious fight on his hands if he tried to eat the house. 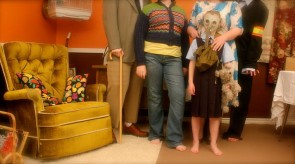