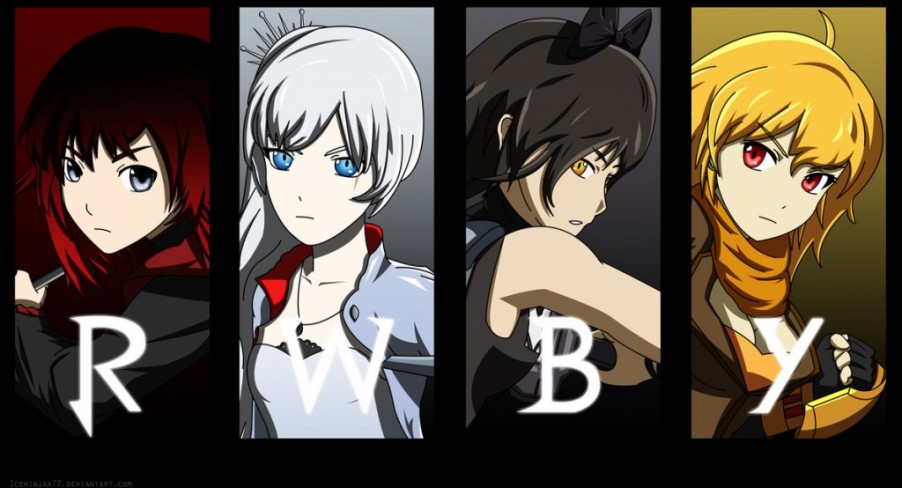 RWBY is a webseries created by Monty Oum and made by the company that brought you Red vs. Blue and Achievement Hunter, Rooster Teeth. The show takes place in the land of Vale and stars Lindsay Jones, Barbara Dunkelman, Kara Eberle and Arryn Zech as Ruby, Yang, Weiss and Blake respectively. The show just entered its second season (or Volume as they’re calling it) and airs every Thursday on the Rooster Teeth site. I’ll be doing these reviews every week from here on out so come back next week for more of the same Anime-ish goodness.

Episode 1: The first episode of the season is a strong start. Picking up from sometime after Volume One left off we get an immediate call-back to the first episode, a really nice touch for someone who’s watched since the very beginning. From here we’re introduced to 2 new characters, Emerald and Mercury. These two have it out with a bookshop owner in a very intense scene that illustrates that this is unlike most other RT content. It can be funny, sure, but there’s a definite air of dread in this scene and the tension is almost tangible, a credit to the writers. It’s at this point that they show off something key to the new volume – the jump in quality of the animation. Not just the fact that people in the background are fully rendered now, and not just shadow people either. The idling animation is infinitely better this volume, and it really does make a world of difference. The re-introduction of the main cast of characters is handled pretty much perfectly in the lead up to the massive fight scene as the writers subtly (or not so subtly in Ruby’s case) remind us exactly who these characters are and show us many of their little quirks while still keeping the flow going and this scene doesn’t feel forced at all. There’s some definite foreshadowing here too as we hear mention of the “exchange students” and the “tournament” for the first time, something clearly going to pay off toward the latter stages of the season. We’re then treated to our first big fight scene, the first volume’s really big strength, and it doesn’t disappoint. Every movement is so smooth and the animators should be really proud of what they made here, it’s a fine example of how to animate a crazy, over-the-top fight. And it’s pretty hilarious when Yang puts the two whole chickens on her fists too. After some more exposition we’re left flabbergasted by the mysterious final scene which answers one question (who exactly are Emerald and Mercury?) but raises many, many more. An ominous final scene to fit the tone set in the first scene and the writing here is, again, fantastic as there’s still some wit and almost a little bit of comedy in there but you certainly know that whatever these guys are up to, it ain’t good. The first episode didn’t exactly leave me clambering for more but it certainly kept me interested enough to continue watching and is a promising start to a new volume of the anime.

At this point I’d like to compliment whoever animated the opening credits. They’re absolutely fantastic and the music is awesome. Just though I’d throw that out there.

Episode 2: The opening pan of this episode shows a beautifully rendered world and is well worth commenting on. Big thumbs up to the animators on that one, absolutely gorgeous. We’re, again, instantly introduced to a new character. This time it’s the “General”, who seems to have some kind of history with Professor Ozpin and co. He seems to be here for the festival but also seems to think there’s something strange going on in Vale and has brought a large military force with him (something that no one seems to notice in the episode other than Ozpin and Goodwitch which is a little strange, you’d figure with a force that size it’d be mentioned somewhere). After being left with way more questions than answers, we’re transported to the four titular characters. They’re playing some sort of board game, not particularly important but serves as a good way to get them together and presents us with some funny jokes too. Something that sticks from their conversation is something called the Vital Festival, which seems to be… well… vital. It’s pretty clear what the end game is here and I’m intrigued as to what exactly is going to happen at this Festival and how it will impact the world at large. They also throw in a little Achievement Hunter reference here which was very, very cool of them. Most of this episode is exposition and there’s not all that much to talk about without getting super specific, which I don’t want to do, but what I will say is that the writing this volume is fantastic. The dialogue sounds like real conversation between real people and this is especially evident in the flashback with Ozpin and Blake. The bump in quality of both animation and writing is really key to this volume already and with both continually improving it makes for some very interesting watching. Again, an ominous ending rather than a cliffhanger which foreshadows darker things to come for Ruby and the crew. Another solid episode which adds to the already numerous list of questions means that I am hooked for this volume and the continuing rise in quality as these guys get more and more used to writing and animating the show is a pleasure to watch.

Check back next week for more from Team RWBY and Co. and you can watch the show itself here.