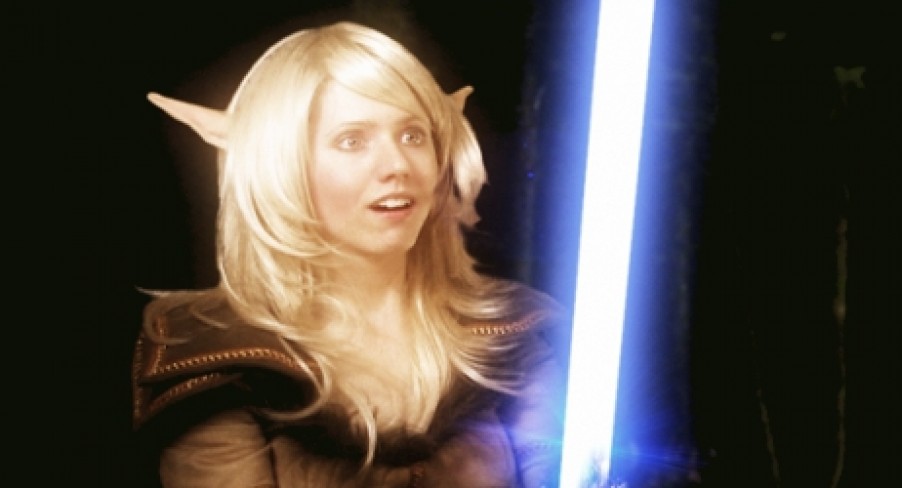 Featured on Pop Culture Monster’s recent TV 2.0 article, and one of his big web series addictions, Spellfury is a web series with a lot of magic. It’s funny, it’s spellbinding (pun. nice) and altogether worth a watch. And the finale is coming soon! Pop Culture Monster sat down with creator Travis Gordon for a chat about the show.

Can you tell us a little about the back story to Spellfury? How did it all come about? Where did the inspiration for the characters come from?

I had been working in the independent film world for about ten years, submitting films to festivals and trying to get our movies into video stores. It was an extremely frustrating process with little success. When YouTube came along I realised I could release our stuff straight to the audience with no gatekeepers to stop us.

We started a sci-fi comedy webseries called S.E.X. (Star Explorer Xenolith) about an angry drunk (Played by Robbie Drebitt) in space trying to rescue his kidnapped girlfriend. It was quite popular on our YouTube channel getting over 30,000 views per episode. It really gave me the chance to learn how to use green screens and work on my compositing skills. I finally realised there was no limitations to what we could do story-wise. The cliffhanger ending was also working quite well on that show.

I became a little bored with S.E.X. it had been more of an experiment than anything else and started to think about what we would do next. I wanted something that would be more mainstream than S.E.X. yet something that I could be happy working on for the next few years. I’m a HUGE fantasy fan and decided something in that genre would be a blast to work on. I took the classic sword and sorcery characters (hero, fighter, thief, etc.) and started to have some fun with them. Eventually bouncing the ideas off the core gang (Julie O’Halloran, Robbie Drebitt, Penu Chalykoff and Jason Devlin) It didn’t take long to get things going, around a month or two of playing around with ideas, storylines and characters. I’ve got a great team of actors and crew behind me that I use on every project I work on and they loved the idea. So we went for it.

Now that Season 1 is finishing up, can you tell us a little bit about your plans for season 2? If there is indeed going to be a season 2?

There will be a season 2, we’ve already shot about half of it. Season one is more an introduction to the characters and world of Spellfury, Season 2 is more action packed and higher stakes. I think Season 2 will really get the fans excited about the show!

What character do you most identify with and why?

Kruskull, he makes me laugh. I find him really interesting, you’re never quite sure what he’s going to do next.

What made you decide to release it every 2 months or so? Do you think you may have lost some of the audience initially, because of having to wait for another 2 months to see approx 2 minutes of film? Will you revise your calendar release for season 2 or will you continue?

Good question, we talked about that before the show started, we were thinking about taking a year behind closed doors and complete the 12 episodes for season one, and then release them promptly every month, the negative being that there would a long period of time where the audience wouldn’t see anything. We’ve got 6,500 subscribers on our Youtube partner account expecting videos from us so we decided not releasing videos for a year wasn’t an option. Also I love interacting with the audience and getting feedback so we went that way releasing the episodes as soon as they were finished. I like that way better, I can listen to the fans and see what they likedand disliked and change the show a bit as we went along. Episodes of Spellfury do take a long time to make because of all the green screen work and visual effects, most of which I do myself. Hopefully the show continues to grow like it has and I can hire on some more VFX guys in the future to speed up the process. I would love to be able to release a 5 minute episode once a month, hopefully we can hit that in season 2. Besides the slow rollout of the episodes I’m extremely happy with the amount of views the series has had so far. 2 million views (Koldcast.tv, Itunes and Youtube combined) isn’t bad for a “season one” of a webseries. If you were a spell, what would you be and why?

The “monetise a webseries” spell, I think a lot of webseries creators would like to learn that one.

Do something you are extremely passionate about, it’ll get you through the tough times.

The computer I’m editing episode 12 on, I’ve got to get that sucker out 🙂