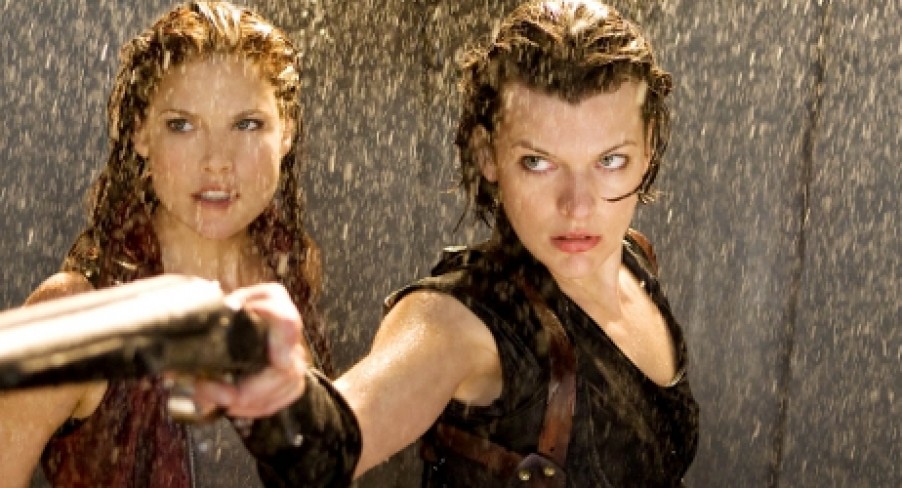 The Resident Evil series is not exactly what we would call high art. Based on the long running Japanese videogame series, the movies are famed for their action, gore, tension and naked Milla Jovovich-ness. This Friday, the latest installment in the guilty pleasure franchise hits cinemas but Pop Culture Monster got a sneak peek to let you know what to expect.

With 3D taking over our screens in a big way, it takes a lot to set a blockbuster apart. However from the opening moments of Afterlife it’s clear that this movie looks like nothing we’ve seen yet. The credits are a slow burn, the outcome is inevitable, but the tension comes from watching a real moment in our world in fully realised 3D. Rain pelts down on a Tokyo road crossing as we focus on a young girl standing still in the middle of the road. We know how this is going to play out, but watching it in slow motion, in three dimensions, we’re drawn in, waiting for that moment when we get to see a zombie lunge at us from our cinema screens. Paul W.S. Anderson makes amazing use of the medium, sweeping over huge landscapes (albeit too often), splattering his audience with blood and putting us smack in the middle of the hoarde. The visuals are so immersive that at one point yours truly had to stop himself from reaching out for a pair of falling guns so that I might play along. Also, the shower room sequence (it’s not what you think) conatins some of the most breathtaking action since The Matrix.

Once you get past the visuals, the film is fairly formulaic. Playing like Day of the Dead meets The Poiseidon Adventure (or any disaster movie), The heroes are trapped at Point A and need to get to Point B. The primary problem, however, is that too much time is spent trying to establish the situation and the characters’ plight and not enough of it was budgeted for kicking the undead in the face. As such, the last act feels rushed and is unsatisfying. The film’s constant critique of Holywood is also a bit tedious, it gets to a point where you won’t be able to take any more bashing over the head with commentary on the industry. Jovovich attempts to branch out a bit, giving Alice a bit more vulnerability than in the previous films, and Ali Larter is pretty spot-on as Claire (even if she doesn’t have enough screen time). Shawn Roberts is perfectly diabolical as Wesker and plays him straight out of the game. The weak link in the chain is Wentworth Miller’s Chris Redfield, but the less said about that, the better. We’re hoping they might recast for a 5th installment; maybe Betty White.

Overall the film suffers from problems with pacing, with too few set pieces and too long between them. There are a good few moments thrown in for the fans, including several Las Plagas B.O.W.s featured in the fourth and fifth games. Also, diehards should stay to the end of the cast credits if they fancy a bit of a geek out. Otherwise the fourth film is a fairly disappointing entry in the series but with a set up for a sequel we can hope that Afterlife will be followed by Rebirth.