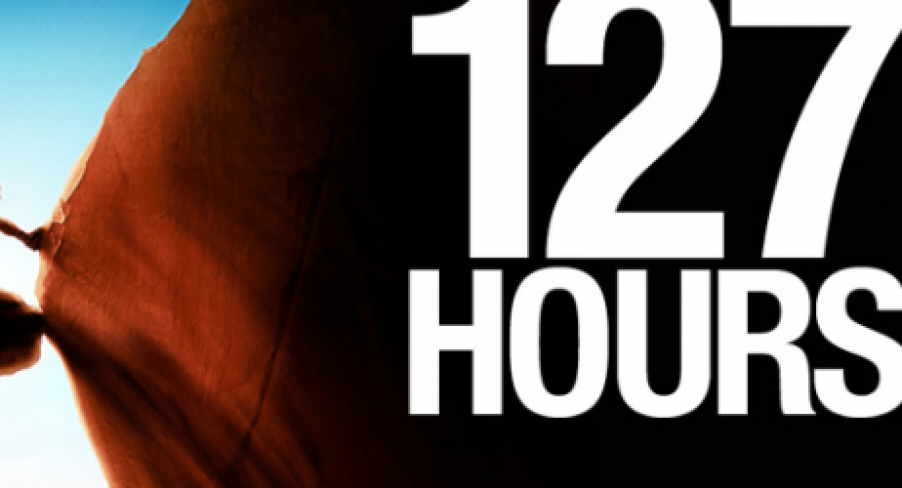 The first film released by Danny Boyle since the huge smash Slumdog Millionaire, 127 Hours tells the true and inspirational story of Aron Ralston, mountaineering enthusiast and all round not-so-nice-guy. Impeccably portrayed by James Franco (Spiderman, Freaks & Geeks), Ralston is an arrogant, self absorbed type, foolhardy and careless in his approach. This, quite conveniently, leads to his eventual entrapment beneath a bolder for five days, resulting in enlightenment and sacrifice.

Yawn. Were it not a true story, I wouldn’t blame you for switching off here and now. I probably would have too. However, the film is adapted from Ralston’s first hand (oooh… Probably not the best turn of phrase…) account of his experience in the darkened, desolate cavern.

Of course, the whole point of the film, as such, is not the ending (I’m sure you’ve heard at this stage, while the fact that Ralston managed to survive to write a book on it is a little of a spoiler in itself!), but rather the journey. Not the journey that brought Ralston to his prison, but the journey that he goes on upon landing himself there.

Through a series of frantic, unsequential flashbacks, we are given hints as to the failings of Ralston’s past, his mistakes: the failed relationship, not returning his mother’s calls. Nothing too out of the ordinary, nothing unforgiveable. Ralston’s major flaw is his arrogance and self-centred nature: he is convinced that he can manage on his own, his way is the best. Five days stuck beneath a bolder with just his thoughts and a video camera to capture these with gradually leads Ralston to realise the staggering truth: he is not infallible; he is not untouchable and thus begins his exercise in escape. While the scene of escape is quite startling to watch, it does not quite live up to the expectations created when rumours of fainting and walk-outs at premiers were floated. The Saw generation has been desensitised to the most extreme forms of violence and, while watching James Franco clip through a nerve is not the most pleasant sight you’ll see today, it is not the worst thing we’ve seen on screen lately either.

The film is by no means perfect. What is more frustrating, however, is the fact that it had all the makings of a masterpiece: we have seen truly spectacular works put out in recent years entailing the one man struggle to overcome various difficulties (Into the Wild, Buried), while we are fully aware of what Boyle can do with a camera. It has all the ingredients, though it simply falls short.

The flashbacks are not explored enough, while Ralston’s eventual realisation seems to come from nowhere. We get slight insights into his past, but simply not enough to care: what made the ever irresistible Clemence Poesy more important than other women in his life? Was his only failing refusing to answer his mother’s calls, or was there a reason that he was running from his past? We never know.

You could argue that these aren’t essential to the overall story, though it is simply difficult to engage and sympathise with Ralston in his position. The only insights we get into his character at all suggest that he is self-indulgent and selfish: why exactly do I want this man to escape, other than basic human decency?

I mentioned earlier the genius of Into the Wild: Sean Penn’s intimate (and, again, true) story of Christopher McCandless’ epic adventure into the wilds of Alaska explores the protagonist’s past, emotional difficulties regarding his family, his hopes, his dreams, his fears… Everything we need to know. To see Emile Hirsch stranded in the wild is heart-breaking: we know that he has made mistakes, but so does he. And, more to the point, we know why he has. With Ralston, there is never a suggestion of why.

Visually, 127 Hours bares a stark resemblance to Slumdog Millionaire. The sunsoaked, picturesque shots, the rapid pace, the intermittent shots of urban and rural landscapes… It looks fantastic. And it is here that the real triumphs end: cosmetically. The setting looks great, as does Franco trapped under his rock. But beyond the synthetics of the film, there is something seriously lacking. Under-developed and, quite simply, too short, 127 Hours is a disappointing adaptation of a harrowing and inspirational story.