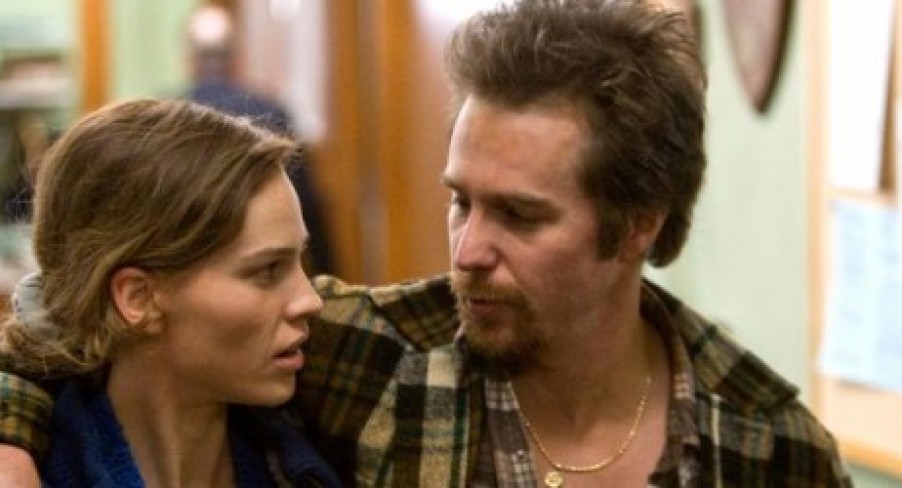 Conviction is the true story of Betty Anne Waters, a high school dropout and a single mom of two boys, who over eighteen arduous years of putting herself through law school, tries to prove her convicted brother’s innocence. Unsurprisingly, Hilary Swank was the actress who snatched the role of Betty Anne. She seems to have a thing for true stories. Not saying it’s a bad thing. Just means that if you’ve heard of the protagonist, you’ll always know how her movies end.

There aren’t very many films that are generally associated with the name Swank that aren’t (a) an Oscar-nom worthy flick where some down-and-out character rises to provide the audience with an awe-inspiring tale or (b) an rom-com stacked with mediocre actors, specifically one (I won’t name names but you know who it is!) who commits crimes against our dialect. Thankfully for those who choose to watch this film, Conviction ain’t the latter.

Directed by Tony Goldwyn, whose best known for his appearance in Ghost alongside Swayze, this film seemed like it would be like any other real-life based Swank film. A story about a person who’s setting out to achieve some life changing goal like Boys Don’t Cry and Million Dollar Baby. I’m not trying to belittle her performances, her two Academy Awards were well deserved, but she’s the kind of actress that you know exactly what to expect from her performances. I’m just thankful that she hasn’t half a dozen chick flicks under her belt.

The story originates back in 1980 in Ayer, Massachusetts where a woman is found murdered in her own home. Two years later, Kenny Waters is convicted. When his family have exhausted his right to appeal, Betty Anne, out of her love of her brother, is determined to save his life. Waters is an average woman who reached extraordinary feat in order to save her brother. Some will say Swank’s portrayal of her isn’t gutsy enough, I disagree. Her mundanity – which is even picked at by Driver’s character – is part of her charm, her sweetness. It’s all about simplicity. She dresses casually. No fuss, no muss. She raises her two well mannered boys for the most part on her own whilst working towards freeing her brother. She keeps her job in the bar despite becoming an attorney. This may not make the most dazzling protagonist you’ve seen but heck, she’s real and she’s ballsy … at least, in an understated sort of way.

If there is one actor in this film who deserves any hype, it’s Sam Rockwell. No matter the character he plays, whether it’s a villain like Hammer in Iron Man 2, the sadistic creep Wild Bill in The Green Mile, the alienated lawnmower in Lawn Dogs, or the misinformed astronaut in Moon, he’s able to get the audience to connect with his characters. It’s hard not to find yourself growing to like him (even if it’s only from afar in The Green Mile) even when you’re frustrated and cringing at his actions. He accomplishes the very same with his portrayal of Kenny, who is a charmingly arrogant and violently short tempered. The pub scene will please any girl who loves them some Rockwell for plentiful reasons but I’ll just name one. He does the second thing he does best – he dances. Admittedly, by doing so a few years back, he provided the best couple of seconds Charlie’s Angels had to offer!

The key thing is that despite the charm of Kenny Waters, though it’s ever present, Rockwell layers him with the vulnerability that you’d expect of a truly innocent man. His best moment is when Betty Anne goes to the prison to visit him after he’s been taken out of isolation. In this short segment, Rockwell shows Kenny’s complete transition from the cocky wild boy to a man who has been broken down and has given up all hope in the system and his life. Swank, opposite him, is as touching especially since it allows us to connect the dots to how the idea of freeing her brother came to her in the first place.

Notable supporting roles were provided by Minnie Driver, who I honestly didn’t think acted anymore so it was nice to see her as Betty’s friend aka the only other ‘old lady’ in the class. Juliette Lewis plays Kenny’s ex and someone who originally testifies against him. Lewis is painfully underused but her performance toward the end of the film is brilliant and quite possibly one of her best film scenes. The relationship between sister and brother was portrayed very realistically, providing more than one heart-wrenching moment. Though I applaud Swank and Rockwell for it, the flashbacks of Bailee Madison and Tobias Campbell, specifically Madison, as the duo as children served its role flawlessly setting the foundations of the trust and love between two siblings.

Conviction had the capability to be more than just a retelling of a publicised story but because the film is based on the story of Betty Anne Waters that mere fact may leave some people who watch it feeling sour That’s because most, if not all, will know how it ends before they even buy their tickets. No suspense can be built within this frame even when Rockwell, albeit convincingly, makes questionable statements about his innocence. The very same goes for Swank when the director tries to get us to question if she’ll graduate or if she’ll find evidence. It’s just not believable because the ending is already set in stone. And because of this lack of real tension and surprise, Goldwyn overuses clichés. Waters forgets her plans, she squabbles with her husband and she gets a ‘makeover’ to make her look professional.

The one character that could’ve proven useful in fixing this was Taylor, the officer who closed Kenny’s case but her presence in the film seemed to just be there to solely irritate the audience with questions like why did she work the case the way she did? or to provoke Swank’s eyes in welling up when bad things were said about her fictional sibling. Goldwyn’s film is watchable. The performances, from Swank and Rockwell to Madison, Lewis and Driver, are all outstanding in their own way. It’s just a bit of a pity that the plotline wasn’t just a hint more unexpected, instead of feeling like you’re sitting down to watch a film of a story someone told you about two minutes ago.