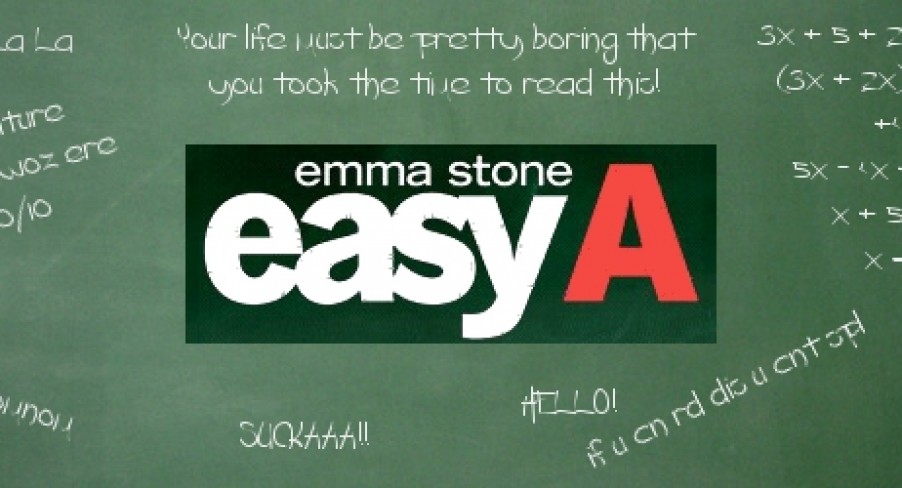 If until now you haven’t been able to put a name to her face Easy A should change all of that. Emma Stone has been slowly carving out her place in Hollywood with strong supporting performances in Superbad and Zombieland, but this new teen comedy sees her take step up to take the lead. The result, while not quite the Clueless we were promised, is still a solid entry in the genre and most of that is down to Stone herself.

One of the primary problems the film faces is the subject matter, we’re talking teen emotional prostitution, so let’s just get that out of the way. In anyone else’s hands the movie could have become very icky very quickly, but Olive’s (Stone) charm and likeability hold the film together. With the supporting cast sidelined, the film strains in parts and we can’t help but notice that a core character group (a la Mean Girls) would have served the film well, allowing Stone a little more freedom and taking off a bit of narrative pressure. All that being said, the supporting cast does not disappoint. Tucci and Clarkson steal the show as Olive’s parents, as a pair of “cool” adults who are (refreshingly) actually cool. Badgely is a suitably sweet and chivalrous hero. Amanda Bynes misses the mark as Olive’s terrifyingly Christian nemesis Maryanne by not fully embracing the shtick of the role. Lisa Kudrow’s performance is stunning but seems out of place; better suited to a dark indie film rather than a mainstream comedy. Malcolm McDowell is completely wasted as the school principal, suggesting an extremely cut down role.

The film is very much aware of its niche and makes frequent and unabashed reference to countless teen movies before it. It borrows, begs and steals from the classics of the 80s and 90s. At times the film is too knowing, reminding you “Yes, we know it’s a movie too”, which can be a bit grating but overall it is well written and has some genuine laugh-out-loud moments. Easy A isn’t going to change the face of the teen movie genre forever but it will slip nicely into your collection between 10 Things I Hate About You and Pretty In Pink.

Easy A is released on October 22nd nationwide.