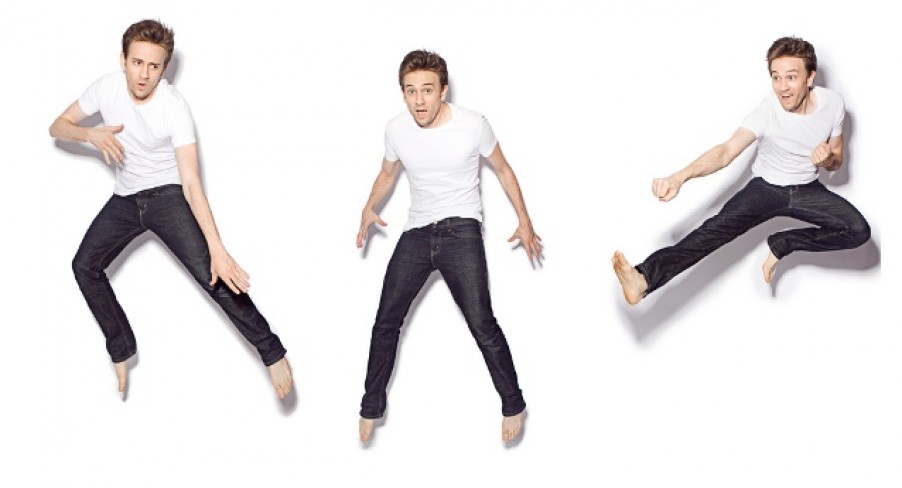 Tom Lenk became a relatively well known face as Andrew Wells in the modestly successful, bathroom confessional style, art house film Buffy, Slayer of the Vampyres but it wasn’t until a reprise of the role of Andrew in the hugely successful Buffy The Vampire Slayer that he really hit the big time. Since then, he has most notably starred on Broadway as Franz in Rock of Ages, in several movies such as Transformers and is now touring his own comedy show. This week, Pop Culture Monster talks Broadway neck, unitards and overly flexible wrists with the one and only Mr Lenk and hopes he kept up his end of the bargain of doing the interview sans pants…

How did it feel to be back in the role of Franz but this time on Broadway?

It felt like warm apple pie. Wait I think that’s already a thing. It felt hungry. I was hungry all the time. I stopped eating bread. Turns out bread can really make you feel full…you know, that whole carb thing. What I’m trying to say is you make a lot of life choices when you are face to face with yourself muffin topping out the brim of a tiny dance belt and then squeezing all that into a sparkly spandex Swarovski crystal encrusted unitard everyday. But in all seriousness, playing Franz on Broadway warmed my inner High School Drama Nerd heart.

Why did you decide to do your Broadway blog?

I did it so my friends back at home could get a little sneak peek into what it was like backstage. I have been doing theatre my whole life here in Southern California, so I thought all my Cali. friends might want to see what Broadway, that thing that we had fantasized for so many years, was really like. Broadway neck? I had never heard of it before. They spray vodka on your costumes to deodorize dry clean only items. Say what? A constant video feed of live sporting events just off stage right? I never would have known! Will you do more Broadway, or indeed would you consider going to the West End?

I’d love to do more Broadway shows! Perhaps a play? I really love stuff that is funny and sad at the same time. I did Amy and David Sedaris’ play “The Book of Liz” for over a year here in Los Angeles a few years back and I loved that experience! The play was so funny and so touching and sad at the same time. I’d love to do something like that on “The Broadway!” And of course I’m dying to go the West End. I mean I’ve gone there. I will never forget seeing the Jerry Springer Opera on the West End! That show blew my mind!!! Can I be in that? And on that same trip I got to see my pal Alyson Hannigan in her West End debut! She was amazing! Perhaps I’ll do my current show West End adjacent? Fringe theat-ah? hmmmm

If you could play one role on Broadway, what would that be?

Drama Nerd heart thumping. Too many choices…OK, maybe this contradicts what I said in the previous answer, but now given the choice of any play, I’d love to be in Noises Off! Any role, doesn’t matter. Wait, I’m changing my answer: Seymour in Little Shop of Horrors. Theatrical fantasizing has commenced. Can you tell me a bit about the show you currently have in the works?

It’s a hodgepodge, prop-tastic, show and tell, song and dance, audience interactive, out of left field, Bob Ross inspired alt. comedy/storytelling show about all the crazy, hilarious, mortifying things that happened to me on and off the Broadway stage during my time in Rock of Ages! I’d call it a one man show except I have a guitar player so I guess that makes it a two man show. Plus when I think of one man show, I think about people crying and getting naked. Mine’s not like that. Though nudity….hmmm. I hadn’t thought of that. It worked for Daniel Radcliffe… Anyway, I just tested the show out in Seattle and the response was amazing! Next I’m hitting Portland. San Francisco and Toronto are on the menu after that. I have a semi-national tour! Wohoo! And I’m going to cities based on requests from Twitter and Facebook. Where do you live Pop Culture Monster? Looks like somewhere in Ireland. Well if I get a bunch of Twitter followers who say please come to Ireland or say a Facebook Group that says We want Tom Lenk in Ireland, then basically I’m spiritually and contractually obligated to take my show to Ireland. See how it works. It’s kind of awesome.

How does it feel to be part of the Whedonverse especially the pivotal Buffy?

It’s A-MAH-ZING. If you told me when I was in middle school that I would be on one of the greatest shows in television history, or that I would be in a comic book, or I would be purchasing a fake moustache at a random party store in Seattle and the man behind the counter would say, “You look like this guy who was on Buffy…” I not only look like him. I am him. I mean it’s the coolest.

Have you been keeping up with the Buffy The Vampire Slayer Comics and the portrayal of Andrew in ‘Season 8’?

I do check in with Andrew from time to time. 🙂 He looks well and doesn’t seem to be ageing at all!

What would Andrew’s song have been had he been around for Once More With Feeling?

A Dance Remix of “We are as Gods” How did it feel to come in relatively late into the show as “the other guy” and quickly ascend to being a fan favourite?

It was overwhelming. I certainly wasn’t prepared and should not have been Googling myself late at night. That’s how my fist solo comedy show started. I found all these horrible/hilarious things about me on the internet. And then I read everything on stage in front of an audience. I may have to revive that show. 🙂

Can we extract any info about the upcoming movie The Cabin in the Woods?

I think I signed something saying I wouldn’t talk about it. But I can say that it was so fun getting to hang out with Joss, and Drew and Amy! And getting to hang on set with Richard Jenkins and Bradley Whitford was pretty friggin’ awesome. I tried to play it cool around them, but I really look up to them as actors! I can also say that Amy Acker and I accidentally took a Bikram Yoga class. I think we miscalculated the Celsius to Fahrenheit conversion. BTW, the world’s best burger exists in the hotel bar at the Sutton Place Hotel in Vancouver where we filmed. I have referred several people to it and they have also enjoyed its delicious flavours.

Did Trudy ever make it to the Olympics?

Sadly, no. She was disqualified for “over-flexibility” in her wrists. She had an unfair advantage.

How long did you study for to become a marriage counsellor?

Approximately zero hours. BTW, “Heart of the Matter” just got into the Rhode Island International Film Festival and the Austin Gay and Lesbian Film Festival this Summer! Success!

Half a locket that my parents gave me before they left me at the orphanage. Maybe far awaaay, or maybe real nearby. He may be pouring her coffee, she may be straightenin’ his tie…..

Tom’s next stop on his tour is the Edinburgh Fringe. You can purchase your tickets for the show here. You can also follow him on Twitter @tomlenk.