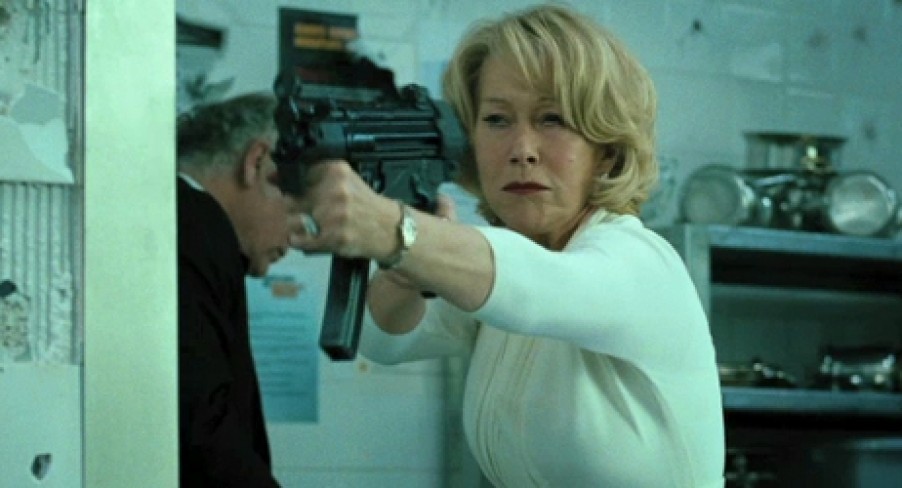 Red allows Bruce Willis to step into familiar territory – it seems with that shiny head of his, all his roles tend not to vary too far from somewhere between cop and agent. Not that I’m complaining, I’d watch this man in just about anything provided Tracy Morgan’s nowhere in the vicinity. So here we follow the story of ex-CIA agent Frank Moses (Willis) who finds it seemingly tiresome to adapt to the civilian lifestyle. His daily highlight being phone chats to call centre gal, Sarah (Mary-Louise Parker). But of course, retired life never goes smoothly and soon a hit-squad is sent to take Frank out. Causalities lie on their side because c’mon, it’s Willis we’re talking here and off he shoots to Kansas City to keep his crush safe from those who are after them both.

All sounds intriguing, doesn’t it? Well, you won’t be gripping on to your seats for much longer because you’ll probably come down a case of the yawns! After an hour or so passes (but who’s counting), it seems we’ve learned little about Frank. Maybe, I’m all questions but here are some of the reasons Red’s sluggish pace made me feel like I was watching Zodiac all over again. Aside from the potential relationship between Frank and Sarah, which is fascinating and all but not enough to keep hold of drifting attention spans, we’re in the dark for too long in terms of why the CIA have a hit list, who’s behind it, whether Frank’s actually the good guy and if we should be rooting for him or Karl Urban’s Cooper. Also knowing that the cast sports names like Morgan Freeman, John Malkovich, Brian Cox and Helen Mirren, you sit waiting for the mercenary gang to sit in one room and conspire together. Believe me it feels like an eternity before they accomplish this small feat. I know they’re supposed to be old but most grandmothers don’t move as lethargically as this plot.

The thing with Red is that although it has a well accomplished cast when they finally do show up we’re left questioning why we were waiting for them in the first place. Willis’ performance is wholly weak – we all know this guy’s got buckets of charm but Frank comes across as a vapid retiree until he meets Cooper, who reads as equally insipid when he’s solo. Cox plays an almost inaudible Russian with no high moments whenever he sparsely graces the screen. Freeman who enters with a delightfully inappropriate scene is possibly the only character who offers much appeal but is again seldom used, which I put down to the writer’s bad judgement. Malkovich fills the position of the crew’s token imbecile as a result of being fed LSD for eleven years. While he gives us many a choke-on-your-popcorn moments, I fear it’s all too easy to grow tired of his presence with one-line jokes and absurd behaviour. Luckily for us all is not lost because Parker completely outshines the boys playing the funny and cute card throughout. She obviously falls into the damsel category but manages to redeem herself by providing more than a few moments of hilarity in those lifeless scenes with off-hand comments and some of the greatest reactions that most in her situation just couldn’t muster. Note her duct-tape rant, response to Frank’s baldness and her elevator scene with Willis. Mirren is also a treat to watch, switching from a classy lady decked in heels to a stone-cold assassin who would sacrifice her chance at true love for the job.

The film’s title stands for Retired, Extremely Dangerous but apart from Malkovich’s side-splittingly comical but mostly OTT cringe-worthy behaviour leading to disastrous moments for the CIA, Willis and Urban’s punch-out and Mirren’s big guns, it’s difficult to see any of them as ‘extremely dangerous’. Its highlights are undoubtedly in its well orchestrated fight scenes and special effects – Urban and Willis’ run-ins are what we as an audience crave to see. The dialogue between the characters is enjoyable… for about the first hour but because of the exceedingly poorly paced plot when the characters do interact, it’s not surprising that an initial reaction would be to fast-forward until something significant happens. There are too many scenes with excessively stretched conversations that don’t actually have much to say and, regrettably for the film crew, none of them have Tarantino’s capability to make them even half as interesting.

Red is in cinemas now.