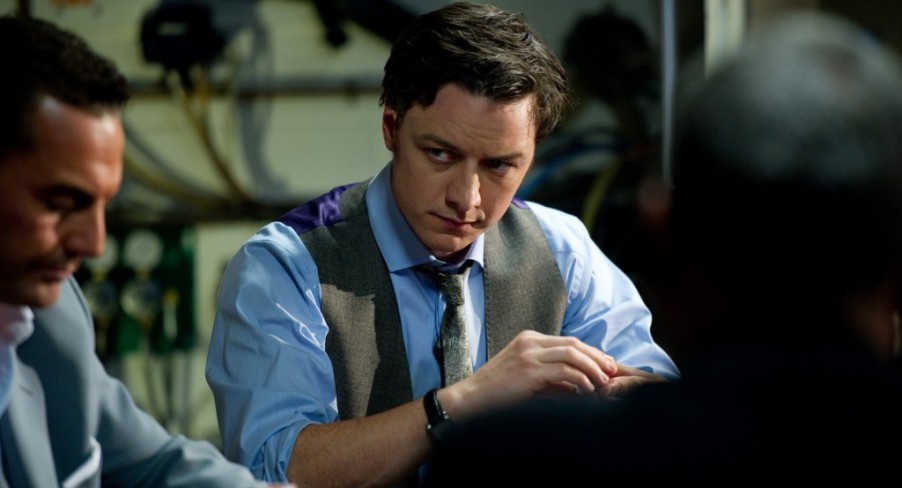 I don’t know if you noticed, but last year there were some Olympics on in London. There was a massive and elaborate opening ceremony which wowed billions of people all over the world. It was a collaboration of artistic genius all guided by the supremely capable hands of Danny Boyle. To most people the idea of creating that ceremony would be intimidating enough to turn you into a quivering wreck. Danny Boyle tackled it with confidence.

Also, he had some free time while he was doing it so he shot a movie as well.

What a fucking lunatic.

That movie is now arriving at cinema screens. So let’s see what lightweight, quick bit of fun Danny Boyle threw together while he was busy running the Olympics.

Oh wait, turns out that Trance is just as professional, artistic and painstakingly worked as anything Boyle has ever done. And is just as enjoyable. There appear to be literally no limits to Boyle’s creative ability.

Trance opens with an art robbery. A £25 million painting is up for auction when a slick heist goes down, narrated by James McAvoy. Once the dust clears the thieves open up their loot bag, only to find that the painting is missing. The only person who could know where it might have gone is McAvoy’s character, Simon. An art auctioneer who moved the painting before being intercepted by lead crook Franck (Vincent Cassel).

Unfortunately Simon suffered a blow to the head during the robbery and now has amnesia. The only way to find the painting is to bring in hypnotherapist Elizabeth (Rosario Dawson).

The rest of the film unfolds like a good heist movie, with the significant exception being that the target is a memory, and the safe is Simon’s psyche. As Elizabeth mines deeper into Simon’s mind, and grows her relationship with the criminals, the lines between dreams, reality and memory become blurred. All explored from different perspectives. The layering is masterful work by Boyle. It would be very easy for this film to become a labyrinthine mess with no way of following what’s happening. But Boyle weaves the strands perfectly, striking a delicate balance between, past and present, question and answer. One scene in particular could have been an annoying extended bit of rather dull exposition, but Boyle instead intercuts the dialogue across multiple scenes in order of interest rather than following a linear pattern in time.

This kind of intercutting coupled with the use of mirrors, jump cuts, skewed angles and light design ranging from realistic to heightened fantasy all add up to a film very much resembling a stream of conciousness, while maintaining enough of a linear plot and anchor points to allow the whole thing to be followed. The plot keeps us guessing as to what the true story is right up until the final reveal, without losing the audience along the way.

With a plot so layered and nuanced naturally the characters are too, and the performances are well up to the task.

Cassel’s criminal leader is both threatening and dashing. He manages to be a character to be feared and liked. He’s introduced in violence and later becomes someone to root for, without going so far as to become an anti-hero. Dawswon, has a lot working under the surface, her performance ties together many perspectives and reveals without darting between characteristics, she keeps her rather complex character grounded. It would be very easy for Elizabeth to come across as some kind of manic personality, but Dawson keeps her in check.

McAvoy holds the lead well. Exploring his mind plumbs many depths to his character and shows that McAvoy really should be getting more complex leading roles, he’s well up to the task. That said, his character does take a bit of a turn toward the end which isn’t quite as well grounded as all the other disparate traits on show. But it still works.

Boyle also manages to show up his mastery of climax again. This rather insular tale of conflict in a small group reaches a pinnacle on par with the rebirth of a star in Sunshine or the war between man and zombie in 28 Days Later. Various perspectives of a key moment just after all is revealed intercut beneath a soaring score brings everything to a satisfying peak. Some of the minor effects work here is a little bit dodgy, as was a moment in the middle of the last act, but it’s not jarring enough to distract from the glorious escalation.

So to all directors out there, continue to be intimidated by Boyle, this is what he throws together while he’s distracted by running biggest show in the world. He doesn’t even break a sweat.