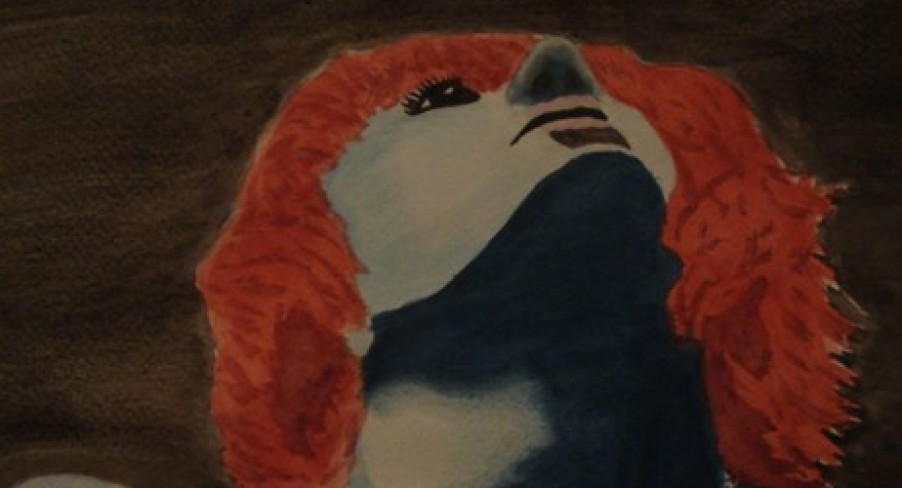 The dark Brighton-based quartet, Birdeatsbaby, are back with Bigger Teeth and an arsenal of songs! Following their 2009 release, Here She Comes-a-Tumblin’, and chomping at the bit, is their new six track EP. It’s a melancholically fresh and frantically energetic collection of the best music you haven’t heard yet. The EP is vengeful, hyperactive, haunting, joyous, and soulful and has just the right amount of humour. Having already listened to this on their bandcamp a ridiculous number of times, I can assure you that this bite size offering will both satiate and leave you hungry for more.

The first bite comes in the form of The Devil So Charming, which weaves its way around you and invites you to sit back and listen. It’s a perfect first song with its gentle plucking and haunting harmonies that sing of “hearts so cold” and the “darkest part of town”. It pulls you in slowly then, just as soon as it’s got you hooked, it changes up. The atmosphere darkens following a charged count of “one, two, three, four” from guitarist and bassist Garry Mitchell. After some impressive and impossible lofty notes, the song eases off to silence. It certainly plays the part of the record’s mood setter but there are still plenty of surprises ahead.

A steady drumbeat from Philippa Bloomfield sets Enemies Like Me in motion. There is a very military feel to the music on this song which seems fitting with the theme of a battle between two people, “Every day I’m losing and you win”. The fierce fight has gone on too long and near the end the wind has left its sails. Instead of bitterly questioning, “Why don’t you beg”, the music takes a step back while the vocals soften and admit that “I could be forgiving, if you’d only oblige me”. Anybody following Birdeatsbaby on Twitter or Facebook would have heard about their free download of Gone, via ‘tweet for a track’ (I believe you can still get a download code off them on Facebook). If you missed your chance then don’t worry because it’s on the EP! The piano is playful and Keely McDonald’s violin is hectic. This is one of the cheeriest revenge songs I’ve heard; I mean the chorus features lines like, “Happy Girly, get up early. Paint my face, my hair is curly”. The song’s vigour keeps it from being mired down in the anger of the subject, which is a nice change from the severe mood of most songs with this theme. Before you know it, Gone is just that. It’s over. It’s a nice and fast track – so you can listen to it twice as much!

Bigger Teeth closes with the poignant Rosary. The melody is strong and gentle all at once, the piano and strings playing beautifully off one another. The lyrics are some of my favourites; moving and exquisite, “They were so proud when I learned how to walk, but since then I just lay on the floor”. Just shy of four minutes, Rosary both intensifies and strips back the instruments all the way through, leaving you unsure of how to feel.

I know it’s an EP and not a full album, like their previous record, but it’s all over way too soon. You’ve only hit play and it seems like a distant, giddy memory that’s whizzed by. But that’s not going to sully the enjoyment, just do as I’ve done any times over the past few days and go back to track one. If you need any further encouragement to give it a listen, it was launched on 42 Day (10/10/10). Do you really need more of a sign than that?

Bigger Teeth is now available to download from Bandcamp and physical copies are on sale from their site.