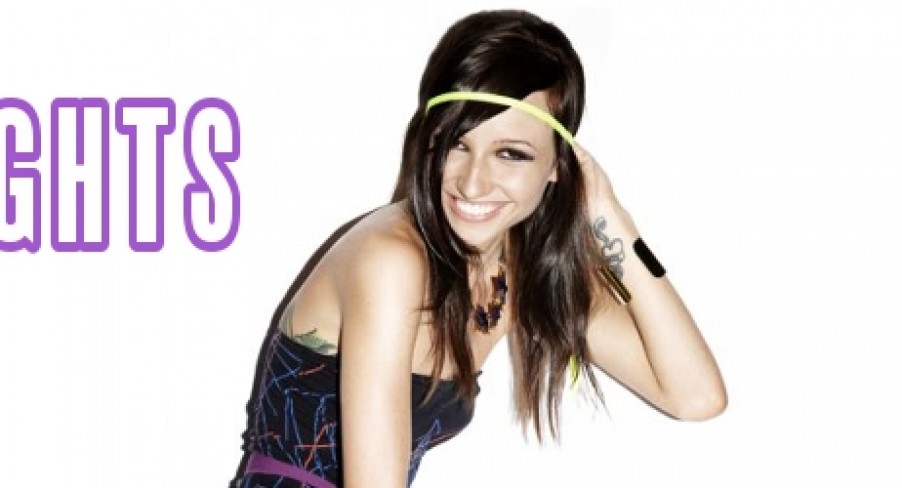 When Pop Culture Monster first came across LIGHTS, he fell in love with her pop sensibility, catchy hooks, great voice. And the videos. Her videos are all spacey and cool. Then it became apparent how much of a complete geek she is: WoW, comics, replica swords, gaming, etc. She’s possibly one of the geekiest people Monster’s ever seen. And it was then that he knew that she was his favourite pop star ever. This week, Pop Culture Monster got the chance to chat with LIGHTS (yes, it’s her real name) about her WoW obsession, her music and her geek possessions.

We hear that you’re the visual force behind your videos, and that your videos form a coherent continuity. People have commented that Second Go is the first video that doesn’t use Space as a theme. Can you tell us a little about the concept behind the video?

The beauty of using science fiction to present my music was in that I had never done it before. When Second Go came along, people were expecting something space themed and that’s when it’s time to try something new! Everything I’d done up until that point had a story or a plot and lots of props, graphics and editing. My manager (Jian) and I plotted something that would be the opposite of that–something completely simple. It was challenging and a little nerve-wracking to know it was only one take and the concept relied fully on the “interestingness” of my performance, but it’s so important to challenge yourself. It turned out being my favourite video.

What’s your ultimate goal as a musician? Could you briefly explain the music making process?

My ultimate goal for music was set when I first started writing songs. It’s to reach as many people as I can with the music I create. The process is most often started by just sitting down in front of a piano or guitar and seeing where your mood wants to take your chords, and where your chords want to take your lyrics, which eventually ties back to your mood for the perfect marriage of lyric/melody. What made you decide to release an acoustic EP? And can you tell us about it?

Part of the reason was because of the great response I was getting on some acoustic videos I’d posted on YouTube, and the fans were asking for it. It was a great chance to show people everything that I am when there is nothing around. It was also nice to show people another side of the songs, one that shines even brighter when you strip everything away.

Can you tell us about your WoW gaming? What race and class do you play? (Can Pop Culture Monster play with you if he promises not to claw the keyboard?!)

First of all, hell yes Pop Culture Monster can play with me. Come to Korgath and join Lights Guild, we’re friendly and helpful! And leet. My main is a Draenei DK, 5.8 gs, and my alt is a Tauren Warrior.

When you’re not able to play WoW, what’s your gaming poison?

Usually when I’m unable to play WoW I’m in a place where I have access to nothing, no Xbox, no internet (eg. no other MMO’s) so I’m basically limited to Final Fantasy on DS and Spider Solitaire. Oh I like Purble Place on Windows 7 (lol).

Where were you when you read that Wonder Woman killed Max Lord? And how did you feel about it?

Interestingly, my WW collection was pretty sporadic at that point (I think that was around ’05?) I had issues from all over just in a pile. I was so intrigued by her that I would just buy random comics and read them up. I don’t even have the issue where she kills Lord, but I remember when I found out about it. It was my first year living in Toronto, my fascination with this woman was starting to fire up. I couldn’t get enough of her so I would just lurk her for hours online. I learned about her awkward semi-romance with Superman, and then eventually got to where Lord took over Superman’s mind and sent him to finish her off. What a strange situation, I thought. I was sad to see her reputation sullied when she “publicly” killed Max Lord, but she definitely made the right choice and I stood by her in that. It didn’t change the fact that she was still a noble warrior who knows that the right decision is never the easy one. After all, Max Lord is just a mere mortal with a big ego. Do you plan on jumping into DC Universe Online?

I’ve thought about it, but having a hand in Evony and WoW, I’m not sure I have enough time to devote to yet another addictive MMO.

What’s your most treasured geek possession?

At this point it is my replica LOTR Arwen sword, hung highest on my weapon wall.

What advice would your letter to your 16 year old self contain?

“Dear mini-Lights, continue with business as usual, because when you grow up you’ll be very blessed and happy.”

First I would say, “Damn you to hell, PCM! And to think I let you into my guild!” (on knees, shaking fist) then I would go save my external harddrives and my tarantula, Lance.