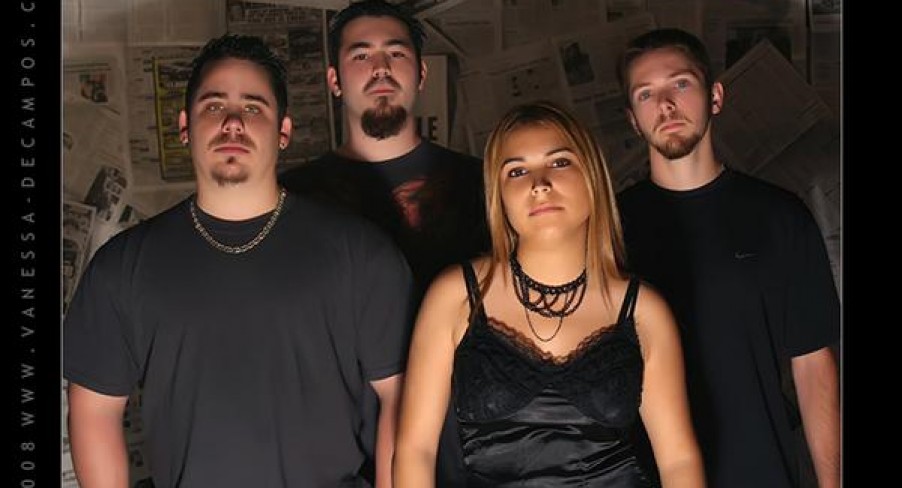 When you think of mainstream female rock, Oblivious Signal should be one of the first names that comes to mind. A powerhouse of vocals backed by screaming guitar riffs and distinct drum beats. Lyrically this band is ahead of the competition and Cristina’s vocals are weaved effortlessly around the melodies and blended fluently in harmony. The band’s new record Into the Night which is released this month promises a richer new sound along with the remastering of songs from their demo, and PopCultureMonster for one cannot wait to get his paws on it. Until that day, he’ll have to make do with having the pleasure of sitting down with their lead singer Cristina T. Feliciano for a natter this week…

Firstly, how did the name come about?

The funny story behind this is that no one knows. One day my old drummer was just sitting around and thought, ‘Oblivious Signal sounds like a cool name’. Since I came into the band in 2007, we decided it was time to attach a real meaning. So together we came with the idea that Oblivious Signal signifies how people sometimes give an impression/signal, and they are oblivious to that impression that they give out. A lot of the songs deal with the outcome of certain situations like that.

How did the band come about? What inspired you to make music together?

Nick’s dad worked at HomeDepot with Jason, and basically introduced the two and they started jamming. That was in 2003. After the singer they had left the band, and they had no bass player, the search for a new singer began. That is when I came into the picture. I had recently left another band, and was looking into something I would feel comfortable and call home, musically speaking. I came in and jammed with the guys, and we just clicked. The music took a different direction when I joined though. It went to a more hard rock feel as opposed to the heavy screamo metal the band was doing before. The screamo stuff was really ripping my vocal chords apart and we came to a point where I told the guys I couldn’t do it throughout EVERY song, and they were great about it, and here we are now with a melodic metal/hardrock album coming out. Our inspiration to make music together was very simple. We all want to make a living out of this because it is our passion and we are willing to do whatever it takes. Who are your biggest influences?

Nick’s biggest influence is Metallica. That is the reason he began to play guitar and write. His other influences include Led Zepplin, Alanis Morissette, and Alice in Chains.

My biggest influences right now are Laura Pausini and Cristina Scabbia. I also have a thing for Carrie Underwood…her vocal range is awesome.

What’s the creative process when it comes to songwriting?

Before Nick and our old drummer would jam out music at a rehearsal studio. Now Nick and I tend to do most of the songwriting together at my in home studio. We track some basic guitar rhythms and patterns onto Ableton or Logic, or I will play something on the keys of a melody that I think sounds cool, or maybe hum it out to him haha. Sometimes I already have lyrics done and try to find the perfect rhythm Nick has done and match it up. We started approaching this method more during the Into The Night album writing. The actual song “Into The Night” from that album was a lyrical collaboration of both Nick and me. “The Inflicted Shame” and “What Drowns Out the Screams” from the album also had the same technique and I think Nick’s metal background with my pop background really made those songs the strongest.

Can you take us through the technical aspects of getting your music ready once the song has been written?

When we have the song ready after recording scratch guitars, we practice it like crazy and work on any new parts we may want to add etc. We then go on to find the bpm we are going to record it at. Our new drummer Dan Hammler prefers to play with a click track so we must have everything to a click. After the songs are ready to be written we go into a studio and drums get tracked first. This takes about a day, depending on how many songs we are bringing in. Then it takes 2-3 days for guitar tracks to be tracked. After the guitars bass usually takes one day. The vocals sessions have always been the killer parts. I do one song in about 4 hours then I am done for the day. That includes all the background vocals, any necessary restructuring, etc. So vocals can take up to 10 days sometimes. That is if you do NOT want to hurt your vocal chords. Once everything is tracked it gets edited, any drums, guitars, bass, or vocals that are off get tuned, and then equalized. Then we master, then we duplicate. I don’t know, I personally have a good poker face…Nick couldn’t lie if the world depended on it…he always cracks up and giggles after a lie. Haha! But you know what, now that I think about it he is kick ass as Poker player…so maybe he does have a good Poker face haha. Popopopopoker face…Sorry got reminded of the South Park episode where Cartman sings that..HILARIOUS!

To make this a career. Travel the world. Nick wants to share the stage with Metallica someday and influence the world with the music. I want to use whatever influential power as a musician to develop and invest in other artists.

If you could collaborate with one band/artist who would it be? And why?

Nick and I would definitely love to collaborate with Alanis Morissette! That would be the craziest collab but would be siiick!

Is there one song that every time you hear it you think, God I wish I had written that?

Haha…”Bring me to Life” by Evanesence. That was basically the start of mainstream female rock.

I’m sure a PopCultureMonster wouldn’t get past my lion of a cat named Nala…she will attack anything in site and doesn’t care how big it is. She has attacked at one point or another every one of my band members. But I would think I’d save her. Are you ever compared to other strong female rock singers?

Yes, all the time! I am frankly okay with it. Other female fronted artists get annoyed, but to me I find it a compliment. I hope one day someone can compare new and up coming artists to me.

You have co-written with other artists, how do you find co-writing as opposed to writing alone?

I have to be in an insane state of mind to write. It is usually 3am in the morning and my mind is on crazy person overdrive. I find at night you are a different person that when sanity kicks in during the day. I can’t do this when I am writing with other artists because I am on their time restrictions. While I do prefer to write alone because of the whole creative process, I certainly do not mind co-writing especially when the other person is well known for their writing skills. I find it an honour when asked to co-write.

Any advice for budding bands/artists?
Determine your genre of music. Go to the billboard top 40’s chart. See who is number one on the spot. That is your competition, and you better be as good or better in order to make it in the industry. Join performance organizations, intern at studios, and get into the professional scene and DO NOT get stuck in the local scene drama. The people who are going to help you are the professionals already in the industry getting to know you and your hard work. Practice, practice, practice. Your shows should always be super tight.

You can check out Oblivious Signal on their MySpace profile along with their Facebook page.