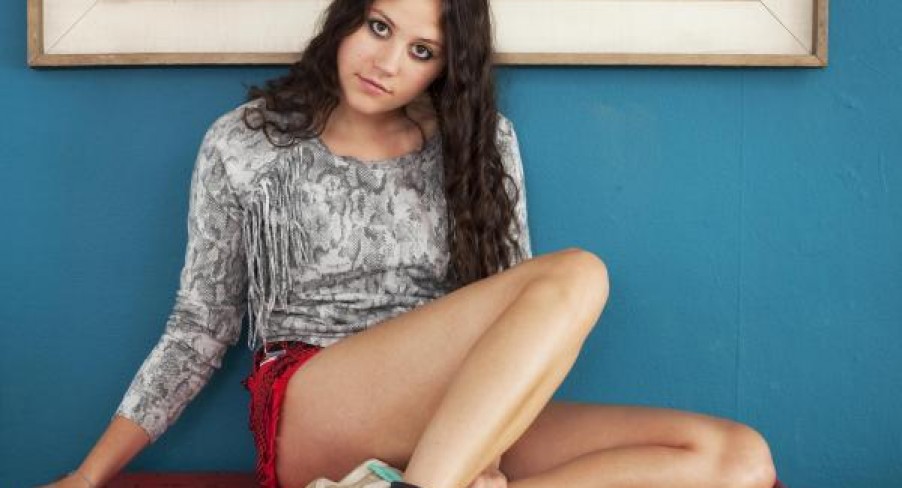 Fresh, Summer-y, quirky, cool are all used to describe this young artist. A former child actress, music is where she found her niche, and we’re all delighted she did. Her single Skinny Genes dropped in April via Parlophone and it has been getting a lot of airplay recently what with it’s vibrant beats sampled from Andy Williams’ Butterfly and catchy whistling hook. After a tour supporting Jamie Cullum throughout May, she’s now set to release her new single Pack Up in July along with her album shortly after. PopCultureMonster got a chance to sit down with the Nike clad, cool and frankly lovely young woman this week and they talked Beyoncé, Twitter and drawers… well, drawer…

Your music has been described as Lily Allen meets Jack Johnson… but how would you describe your style?

How did the tour supporting Jamie Cullum go?

It was amazing ! He’s such an incredible musician and I learned a lot watching him and his band from the side lines. The audience he brings in are very much music lovers and they were lovely and welcomed me very nicely so I enjoyed it thoroughly.

How was the Dublin crowd?

The Dublin crowd were one of my favourites on the tour actually. It was my first time in Ireland so I got a great 1st impression. Why did you choose the name Eliza Doolittle?

Eliza is my real name and Doolittle just stuck.

I would love to be traveling around the world playing my music to anyone who wants to hear. That would be a dream !

How has your music evolved since you first started?

When I first started writing songs I was about 12 years old and my style then was very much an impression of Beyoncé! But as I grew I found my own sound and have ended up here.

You’re very active on social media sites such as Twitter and YouTube, do you think it’s important for artists to utilise these outlets nowadays?

Yes! Absolutely. It’s’ a great way to interact with your listeners.

What’s your creative process when it comes to songwriting?

I change it up a bit but tend to begin with an idea for a song and then work on a melody and then add lyrics to the melody…sometimes I write on the piano too.

Are any of your family musical? Were you brought up with music? If so, what kind?

Well my Dad mainly listens to classical music so that was always playing. My mum always played whatever was popular at the time from the charts and maybe the odd musical song she was learning!

What are your plans for this coming year?

Lots of gigs and festivals. I’m playing Secret Garden, V Fest. and loads more… all on my MySpace. And my album is coming out in about a month straight after my single Pack Up which is out on July 5th.

Can it be a drawer of things? Well if it can it would be my drawer of lyrics, photos and diaries.

What one piece of advice would you impart to any budding musicians/artists?

If you haven’t started writing, start and if you have, keep doing it!

You can check out Eliza on her MySpace or Twitter and her videos are all up on her YouTube account.  We urge you to listen to Skinny Genes and Pack Up and try tell us they’re not total Summer tunes!