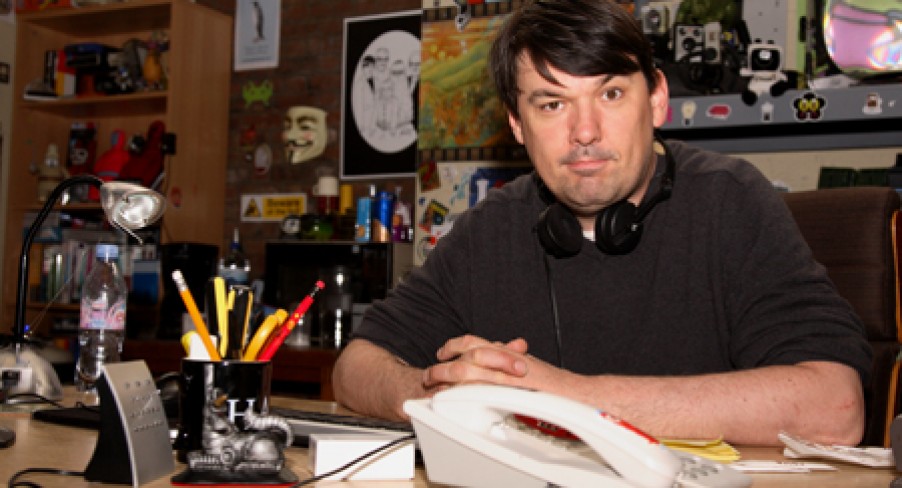 From the living room of a parochial house to a grungy London bookshop to a disfunctional IT department, Graham Linehan is a man who can sow anarchy wherever he goes. With Father Ted, Black Books, Big Train and now The IT Crowd under his belt as well as writing credits on The Fast Show and Coogan’s run, Linehan is the force to be reckoned with in British comedy. Pop Culture Monster caught up with him this week to talk writing, iPads and The IT Crowd’s 4th season.

What is your creative process when developing a show?

Depends. On a a new idea, takes a long time of experimentation and investigating blind alleys. On an individual episode of a show that’s been going a while, like ‘The IT crowd’, it’s much easier. I start with situations, images, characters and try to tie them all together in a story. When I’m sure the story works, I write a first draft. Then I rewrite it, rehearse it, rewrite it, make it. Then we rewrite it a bit more in the editing room in the sense that we take out things that don’t work.

Were you surprised at how warmly Father Ted was received in Britain?

No, because I thought it was great. It was so much fun I didn’t think there was a chance it would fail. In other words I was young and stupid. I was surprised it was commissioned in the first place, though. Big, big risk for a channel.

Brilliant! Although I’m not a facebook user so I couldn’t really join in.

What is your favourite episode of Father Ted and The IT Crowd? Of all the characters you have written, who do you most identify with?

Who is your favourite character to write for?

All the IT Crowd characters. And a good new character.

Don’t suppose we can extract any details of Season 4 of IT Crowd?

If you could write for any other TV series, what would it be?

At the moment? Tim and Eric. If you were starting out today what would you be doing to get your work noticed and would it involve social media? (via @worldofhiglet)

I really couldn’t say, although I can’t see how you could avoid using Social Media.

Web television is swiftly becoming a useful way to conveniently and easily get content to the masses. Do you watch any web series? If so, what? (via @worldofhiglet)

No, not really. I’m not a big fan of telly programs on my computer. maybe with the iPad, I’ll get into the habit…

And supplementary to the question, would you ever consider making one yourself?

If I had good reason to!

If you could impart one piece of advice to budding writers what would it be?

Leave it in a drawer for a month, then read it again. You’ll see what’s wrong with it. Also, read Bird By Bird by Anne Lamott. It’s my favourite book about writing.

Find Graham on Twitter @Glinner and on his blog.