We Are With The Band – Interview 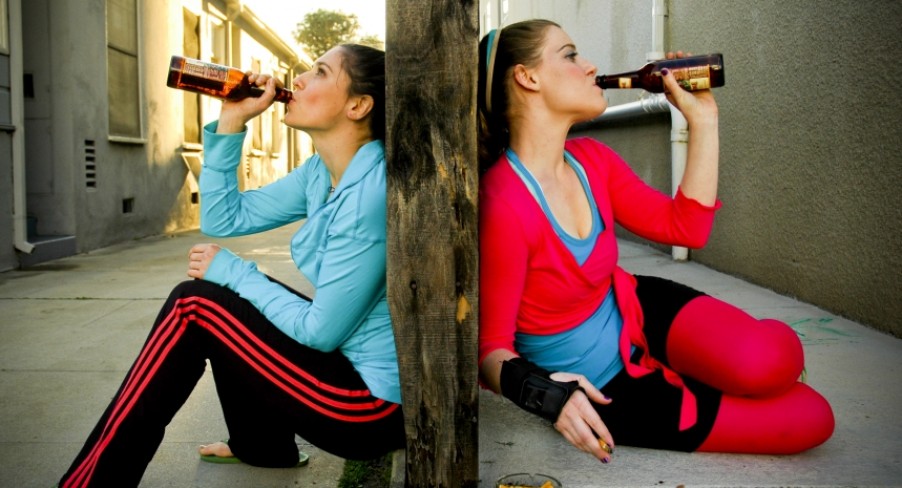 Boozing and Schmoozing is the way of life for your typical Hipster, and Elle and Marci are no different. Set to the backdrop of LA, We Are With The Band was already voted one of PopCultureMonster’s 5 Webseries I Want More Of. The series revolves around the lives of these young women as they hilariously go about finding themselves and become semi-alcoholic groupies in the process. There is no du jour fad they won’t try, no party they won’t crash, and no band they won’t stalk and everyone knows “liver damage only happens after 30.” Created, written, starring and produced by Heleya de Barros and Vivian Kerr, this is one webseries you cannot afford to miss, and just to help you realise just how good it is, PopCultureMonster is bringing you this…

How did you come up with the idea for WAWTB?

Vivian: Heleya and I came up with the idea together. We selfishly wanted to write a vehicle for ourselves, and we wanted to do a show that was a little bit outside of the mainstream, inspired more by British comedy. There’s a lack of humility and self-awareness in Los Angeles which is very funny to me, and hipsters are pretty ripe for parody.

Heleya: When we graduated from college Vivian and I started going to see a lot of local music in LA. As we started to learn the club scene we were blown away by some of the characters we met. Often the ‘people watching’ between sets was more interesting than the music. When we started to brainstorm about writing a series we thought the hipster scene would make great material. We also thought the idea of these two girls who are trying to find themselves spoke to a large audience. There are a lot of LA specific jokes, but I think anybody can relate to the struggles Elle and Marci deal with.

What made you decide to do a webseries?

Vivian: We wanted to be able to distribute our show to the widest possible audience, and the Internet is the place to do it.

Heleya: The internet provides the most freedom to create whatever material you want. We were committed to staying true to our vision from the beginning, and the internet was the best avenue for that. Vivian: Heleya was performing in the Edinburgh Festival last August, and when she got back to LA in September we started to talk about the show in earnest. I spent most of October writing drafts and we began pre-production in November. We shot it in February and we’re still working on it

Heleya: Like many creative endeavors, we TALKED about doing a web project together for a while, but we finally got up off our butts and started to make it last fall. I credit Vivian with getting the ball rolling for real. Once we had a script in our hands it was easy to get more and more excited, and from there the project grew. It’s still growing.

Vivian: I had the two characters in my head for quite some time and I knew that there would be a leader/follower dynamic between them and that they would have a really co-dependent bond. I remember asking Heleya which one she wanted to play. Once we figured that out, it was easy to write the dialogue.

Vivian, how did you handle creating, writing and starring in the series?
Vivian: It’s complete madness, but it’s also very empowering. A year ago, I didn’t think of myself as a writer. I felt dependent on casting directors and agents to get me roles and I was very frustrated. It’s still hard to find good representation and get auditions, but I know now that I can continue to work and write for myself while I wait for the phone to ring.

Are there any parts of your characters that reflect your real personalities?

Vivian: Oh God, I hope not! Elle and Marci are such screw-ups! Heleya can be very confident like Elle. Heleya and I were freshman at USC when we met, and I remember being a bit intimidated by her. She’s a sassy lady and so is Elle!

Heleya: Haha! I think there are elements of Elle and Marci in a lot of twenty-somethings. They are trying to find themselves, find balance in their lives, find direction. I think most people can relate to that. But I think Viv and I have our lives in better order than Elle and Marci–hopefully! Had either of you done any web content before?

Vivian: I had a small recurring role in HBO’s first web series Hooking Up which starred Jessica Rose (LonelyGirl15).

Heleya: This was my first web venture and I’ve learned SO MUCH about the genre. It’s been a really fun learning experience!

Is there going to be any notable guest stars this season?

Vivian: Our friend Nick Rutherford is in one episode playing a sketchy guy who tries to abduct us in his car, and he really steals the show. He’s a stand-up comic and he’s hilarious.

Heleya: I agree, Nick is probably our best known guest star. He and I did improv and sketch together in college, and we were so happy he could come do this role for us! He is one of the funniest people I know. He is in the sketch comedy group Good Neighbor Stuff and is also a stand-up comedian. Check out his site!

Is there a green light for Season 2?

Vivian: We’ve just signed a representation agreement with School of Humans. They are going to help us broker a deal to get corporate sponsorship for Season 2. So fingers-crossed!

Do you watch any other webseries? If so, which ones?

Vivian: I try to watch at least one or two episodes of just about everything. Legend of Neil cracks me up, and Space Hospital and Mountain Man are both fun. I like shows that are a bit strange, and I generally prefer comedy.

Heleya: We have had a lot of fun discovering new shows through this process. There is so much variety out there! I love the two guys on Copy and Pastry, and the soap fan in me loves Anyone But Me. But my new favorite is the animated series Happy Tree Friends. Its really hilarious. What’s the most challenging thing making a webseries?

Vivian: Staying true to your vision. Not letting anyone tell you what can or can’t be done. And, of course, how it eats up every second of your free time. Heleya and I laugh because we don’t get to see our other friends anymore!

Heleya: The time! It’s a lot of work to keep everything up and keep in tune to the genre. My boyfriend jokes that we have a third member to our relationship now (my computer). Sadly, it’s true.

Vivian: I have an antique Russian writing desk from my grandparents. I’d save that.

Heleya: My clarinet. It’s probably the most expensive thing I own, even though I hardly ever use it. Maybe Elle can take up her musical side in season 2!


Vivian: Do it. Don’t wait. We had a teacher, Joseph Hacker, at USC who said that the biggest change in his career came when he stopped trying to ‘be’ something and started trying to ‘do’ something. And it’s true!

Heleya: DO IT! And read Bernie Su’s (writer of Compulsions) Recognizing Traps in Pre-Production blog about locations. I wish we had.