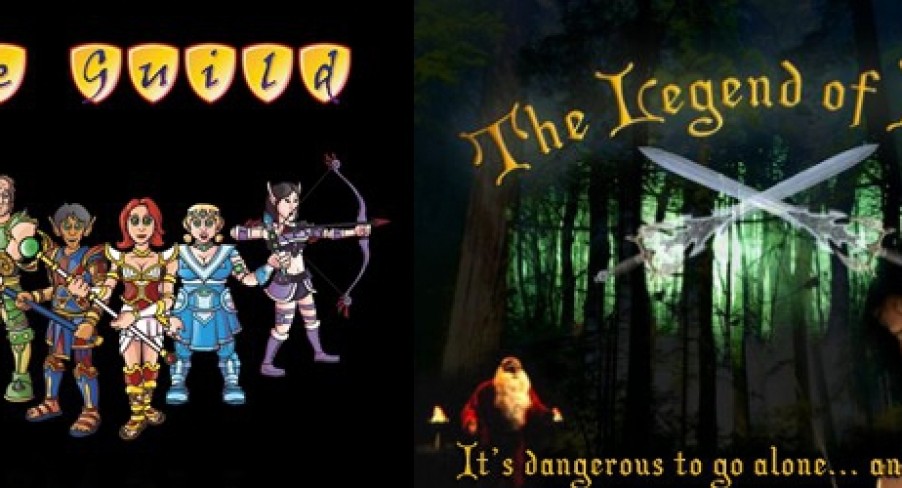 Funny, raunchy and oh so NSFW, Legend of Neil became a smash hit the moment it hit our fair interwebs, and it’s easy to see why. A young guy transported into the world of Zelda and mistaken for the main character Link? Check. Side-splittingly funny? Check. Dick Jokes? Check. Felicia Day? Check. And to top it off, it was created by none other than Sandeep Parikh: internet superstar, The Guild member and absolute funnyman. As Neil starts it’s 3rd and final series, Pop Culture Monster sits down with Mr Parikh to talk web series, the future, gaming and dick…jokes.

What was it about Zelda that made you want to write a web series based around it?

There’s something poetic about the fact that my parents would complain, as all parents do, while I was spending a large chunk of my childhood playing video games that I should “stop wasting my time,” and that “playing that stupid game will never get you anywhere.”  But, I did not make the show to spite my parents. I just truly love the original version of the game, and thought, “Man it would be really funny to see a regular schmo stuck inside there and try to figure out how the hell to get out.”  There was just something magical about that golden cartridge, and it being really the first open world game, that really captured my imagination when I was little, so it’s been a real dream come true to play it out in Web series form.

Was it a difficult decision to end Neil on Season 3?

Not really. I always wanted it to be a trilogy of seasons.  I love the trilogy format in general, growing up on Lord of the Rings, Star Wars, Back to the Future, etc, and I felt that Neil’s story had a similar (if a little more comedic/crass) arc than Frodo/Luke/Marty.  I will certainly miss the world we’ve created, but I also believe in going out before things get stale.  I really respect someone like Ricky Gervais and Stephen Merchant and their decision to end the British Office after 2 seasons and a couple Christmas specials.  It’s definitely time for Tony and myself to mine some new territory for comedy. What was it about Kim Evey that made you think “you know what? She’d make an excellent homeless person”?

I think you have to ask Felicia that because Kim was cast as the homeless woman hired to wait in line for Tink in The Guild season 3 opener.  When Tony and I wrote in our homeless person, I could think of no better person.  Also, it was a fun crossover, and Kim was really into it.  I heart homeless Kim Evey.

Season 3 of The Guild was, like a film, very much a one main arc season, will Season 4 continue this way?

Yes and No.  Felicia always does a great job of having the season build to an exciting climax, and season 4 is no different.  This season, as the first three existing episodes indicate, all of the main cast have their own storyline with Bladezz at Cheeseybeards, Vork building a Guild Hall, Codex “dating” Fawkes, Zaboo dealing with that and intentionally trying to get in the friend zone.  Clara and Tink have a really cool story line as they join forces to build their version of the Guild hall.  All the storylines will end up brilliantly interweaving; it’s always a blast to watch it play out.

How much of your experience with improv makes it into a show like The Guild, or indeed Neil?

This year more than ever the improv seems to be finding its way into The Guild, but it’s still less than Neil.  I love improv, and encourage all of my actors in the Legend of Neil to view the script as a blue print.  When we’re in a table read, or rehearsing or on set, my goal is to find the most interesting joke possible, so I just try and mine the minds of my actors as well as my own and Tony’s.  Then it’s ultimately up to me as a director to make sure that it works with the story and is cohesive.  I think it tends to keep the show feeling fresh and the actors tend to be more comfortable as they make their characters their own.  You get those moments that you just can’t script: the moments where someone is talking over another or something.  There’s an authenticity to it that I really enjoy.  Also it makes the shoots more fun.  I try to run it such that every time I say “cut” it’s because my crew can no longer contain their laughter and would ruin the take anyway. Honestly, working with someone like Felicia Day must suck. How do you cope?

As I say, the best dick jokes not only make you laugh a lot and cringe a little, they also give you a raging boner.

If you could choose, would you game with the Knights of Good, or the Axis of Anarchy? And why?

I’m into dick jokes, but not dick heads, so I’d choose Knights of Good.

What advice would you give to budding web series creators?

Shoot with GREAT SOUND. If you pay for anything, pay for good production sound and good post production sound.  Make something that’s specific and unique to you. Study, study, study and then shoot, shoot and shoot.  Force yourself to make five projects in five months, quick and dirty.  Don’t have the first thing you do be something that you’ve got a lot riding on.  Shoot simple stuff, and grow into your craft.  You only learn by doing it.  Also, do it all, write it, shoot it and edit it.  You don’t always have to do that but it’s a great lesson to do them all at first (it’s also cheaper), then you really will start to understand what you’re good at and what other people would be better at, and you can start delegating and hiring other folks.  But when you’re starting out, learn it all.  Surround yourself with people that are better than you. Are you working on any other projects besides Neil and The Guild?

Yes. Too many.  Check out The Webventures of Justin & Alden, a series that I wrote with Tony Janning that was directed by The Guild’s Sean Becker and that Felicia and many other surprise guests star in including Shannen Doherty and Milo Ventimiglia (Heroes). It’s a crazy romp through time/space and the world of Web series.  I also appear in Squatters, and NBC’s Community Webisodes playing Abed’s Abed (I pop in on a TV episode as well).

The success of The Legend of Neil has netted me a television pilot script deal with Comedy Central and that will be my next main focus outside of some other web projects that I’ve got going on.

My laptop and my roommate.  In that order.

Season 3 of The Legend of Neil is airing presently and is up to episode 2. Catch Sandeep in action in The Legend of Neil and The Guild. Follow Sandeep on Twitter @sandeepparikh. And for your ease of viewing, Pop Culture Monster has episode 2 of N3il “The Gloffice” below…Enjoy!