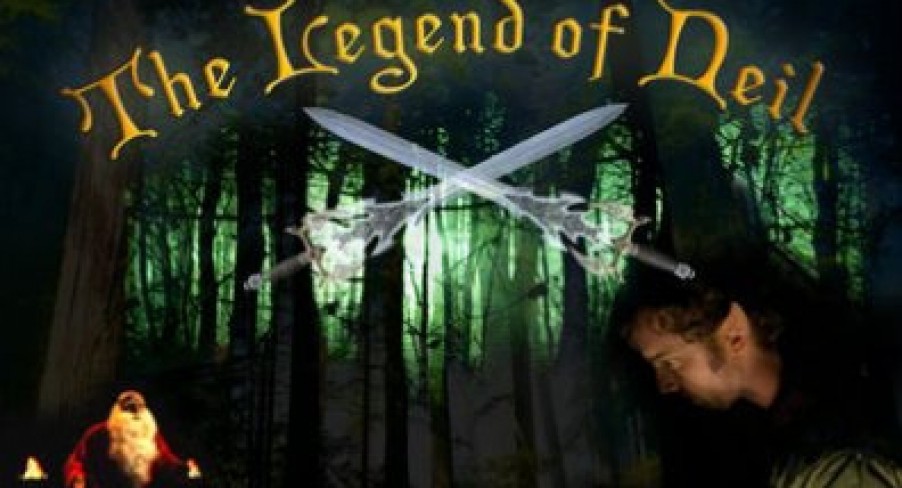 You write Neil with Sandeep Parikh. How did you two meet?

We met about 4 years ago doing improv comedy at The Empty Stage theatre (which sadly no longer exits). We had only known each other a few months when I wrote a 5-minute sketch pilot for channel101.com with another writing partner of ours, Rich Kuras, called ‘Raptor’. Sandeep had already done a channel101.com show, and so we asked him to direct.

How did you become involved in the series?

Sandeep wrote a sketch about The Legend of Zelda, with Link as this gruff, cranky a-hole and he emailed me saying he always thought of me playing that guy. He thinks I’m an a-hole. We had already done ‘Raptor’ and had been doing improv comedy for a while at this point, and we enjoyed working together, so I was game from the start. We went out and shot the pilot out of our own pocket.

Where did the idea for The Legend of Neil come from?

Sandeep and his roommate were having beers one night, and his roommate said he could beat the original game of Zelda in less than an hour. Sandeep didn’t think that was possible, so they cracked open another beer and he started playing. While watching, Sandeep started thinking about how random the game was and so he started writing a sketch. Why do you start with nothing but a shield? Who’s this weird old man in a cave that gives you a wooden sword? Why the hell is it wooden? And, like I mentioned before, he emailed me, we re-wrote some of it, and then changed it to being about a regular joe-schmo slacker that gets sucked into the game. Neil being from Trenton was just by chance. It was literally the first city we wrote him saying he was from.

How does it feel to be nominated again for the Streamy’s for the second year running?

It’s really awesome. I think The Streamys are doing a great thing for web content. And having our show getting nominated by our peers and ever-growing fan base is incredibly flattering. It’s added motivation that what we’re doing is striking a chord with people and is getting recognized.  A far cry from where we started with a tiny crew and both of us wearing several hats on set. Web content has changed the game and it’s exciting to see where it’s headed. The original NES is my favourite hands down. My brothers and I spent hours playing that thing. That game blew me away when I was 10 years old. I’m very proud to be a child of the 80’s and I’m also relieved that game came out before I hit puberty.

Season 2 of The Legend of Neil ended on a cliffhanger. Will Neil press continue?

I’m really not allowed to divulge too much about season 3. I do know that the season would be ridiculously short if he didn’t hit continue. So, you’ll just have to wait and see.

What is your writing process?

It’s Sandeep and I in a room with two laptops and usually at least one white board. Whoever isn’t typing is usually pacing around the room. We improvise a lot. We outline a ton before writing, so that when we do start we just bust the scripts out. At this point, we know these characters so well, and all the actors that play them, so we’ve really had fun continuing this story. And we’ve basically known since about halfway through season 2 where we wanted to go with this thing, so we are very excited about season 3.

Have you any advice for people who may have a web series in mind?

Do it. Just make the damn thing. Find like-minded people that also believe in it and go out and shoot it. Make sure the lighting and audio don’t suck, and have fun.

What sort of things can fans expect from Season 3?

A lot. The core group of characters will all be back. It’s going to be fun.  And there will probably be a few cuss words and dick jokes.

Will there be any more musical episodes?

I can’t really answer that question. There will be plenty of surprises though.

Will Felicia reprise her role as the psychotic Fairy?

There is a good chance that Felicia’s Fairy will be back. We love the Fairy. And Old Man, and Gannon, and Wizrobe, and Zelda. We love them all. And, dick jokes.

You can find all the episodes at EffinFunny and Atom. Also, find Legend of Neil on Twitter @LegendofNeil.