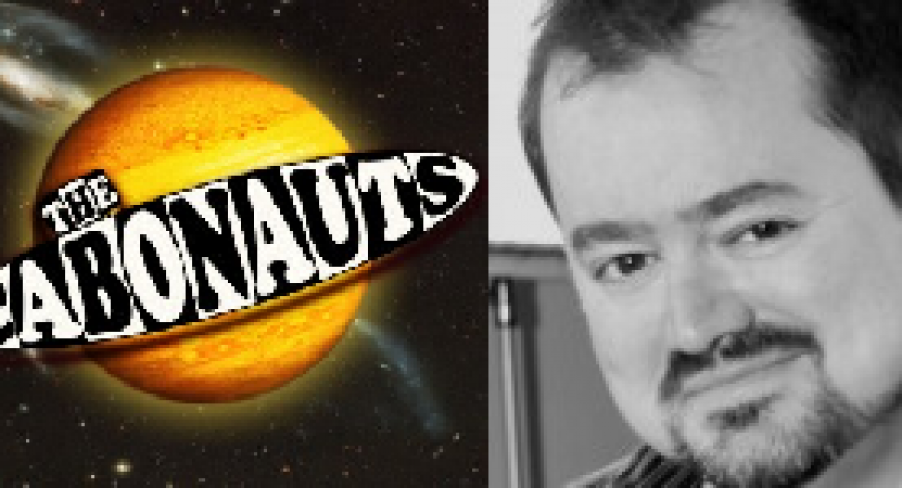 This week PopCultureMonster spoke to Hayden Black, creator of The Cabonauts, about the upcoming scf-fi musical comedy. Set in 2183, each episode sees a sci-fi star ferried through space in the back of Harry (Norm Thoeming) and Cyril’s (Hayden Black) space-cab. They are joined by their Boss CJ (Nichelle Nichols) and Lolita (Monica Young).

You’re the creator of “Goodnight Burbank”, “Abi’s Teen Diary”, “The Occulterers” and now “The Cabonauts”; What inspired you to produce programming for the internet?

It’s the easiest way to get something done. If I want to put together a low-budget show that’s well written and has a great cast I can do it myself and not wait for someone else to come along and give me money, etc. I tried that. BIG waste of time. But be warned – doing it yourself also means you have to wear a lot of hats. Everything from buying lunch to marketing to flying out to the UK to meet with TV execs who want your show (this is where I’m talking to youfrom right now). So make sure you get good food and pack warm.

With so much reality programming on television and so much emphasis placed on ratings, would you agree that the web series has become the new writers’ medium?

A lot of people seem to forget that when a writer is finished (if we ignore the fact that a writer is never finished), he has a bunch of papers collected together in a script. That script then just sits there until directors, producers, actors, set designers, graphic artists, editors, camera people, sound & lighting people and a MYRIAD of other talented, wonderful people come along to make it. So yes, it’s easier for a writer to get their work seen – but it’s a misnomer to think they’re the only ones benefiting from the interwebs. It’s a little frustrating that people just think it’s the writer who now has access (do you hear that, Strike TV? 😛  )  So for the record, it’s a new everybody’s medium.

That’s a tough one. I don’t really. I’m so incredibly busy I don’t have time. I also have STACKS of unwatched DVDs in my DVD closet that are piling up so it’s not so much as an indictment of web content, just a comment on my lack of free time. I did have to watch a vast amount of web series recently to judge a competition and I was amazed at the staggering amount of utter shit out there – but then, when anyone can do it, pretty much anyone is. But stand outs are Nick Thune (I think his show is called Nick’s Big Show – Google isn’t being my friend at the moment) and Between 2 Ferns w/  Zach Galifianakis.

Have you any advice for people who want to produce a series?

Advice ranges from “have an original idea” to “take your time to write it properly, don’t be lazy” to “learn what room tone is and have your editor lay it down in EVERY scene”. Take your pick. 🙂 Your new project, “The Cabonauts”, sees sci-fi figures ferried about in a musical space cab. What was your inspiration for the project?

I was 15 when I came up with the basic idea. Dumb and dumber in space inspired by reading 2000AD comic and Douglas Adams. I even wrote a screenplay that no one’s ever read that included a brilliant character called Rupert who was a gay robot. It was called Blitz. I would really like to see Rupert appear in The Cabonauts at some point – maybe if I get a big budget (or a cool robot suit for an actor. If anyone has one, email me).

The musical aspect is brand new and it was inspired by Norm Thoeming who plays Harry, our incompetent driver. Norm performs in an improvised musical show called “Opening Night – The Musical” in Hollywood where they literally improv an hour long musical based on a suggestion from the audience. It’s fucking amazing. Every time I see it, I’m blown away. Anyway, when I cast him I thought how it might be possible to incorporate singing into the show and then thought about turning it into a musical. An odd choice because I don’t sing (other than in the shower) and I’d never written a track of music in my life. But then that’s how I roll. Sort of like an idiot. Or a silly puppy.

How did it feel to have an icon like Nichelle Nichols come on board?

How do you think? Fucking AMAZING! I  was over the moon. Basically, we had our casting agent, the lovely amazing Erin Gray (she of the Wilma Deering in Buck Rogers thing) approach Nichelle for us. Word came back that she’d agreed to see a script and a description on her character so I thought “hmm. I should probably write something”. I will NEVER forget sitting down at my computer that day – it was a Friday for those of you who really want the most useless information I can think of – and, as I stared at a blank word document, thinking it was now all down to me. I sent the stuff off later that day and the next week I got a phone call – Nichelle was beaming on board. Can you say beaming? Is that just stupid and cheesy? I don’t care. It’s Nichelle Nichols. The woman’s a living legend.

Can you give us an idea of some of the guests you have lined up? Yes. They’re well known. How’s that? Well, the pilot has Miracle Laurie from Dollhouse (she played Mellie/November) and James C. Leary from Buffy (Clem the loose-skinned Demon). And we have people lined up like John Barrowman, the dreamy dream-machine from Torchwood and Dr. Who. And people like David H. Lawrence from Heroes who also appears on this other show I do, Goodnight Bur-something-or-other. Lots of others from shows like Battlestar Galactica, all the Star Trek iterations, Dr Who, so on and so forth. Every time one of them says they want on board, I die a little inside but then I’m reborn stronger and better than before.

What sci-fi legend would you like to see in the back of The Cabonauts’ taxi?

God, there’s so many. Anyone from Dr Who old or new – David Tennant, Chris Eccleston, Tom Baker, etc. Other than the general obvious, Blake’s 7 cast anyone? Am I on my own there? I’ll get my coat.

Stay tuned for news on The Cabonauts: