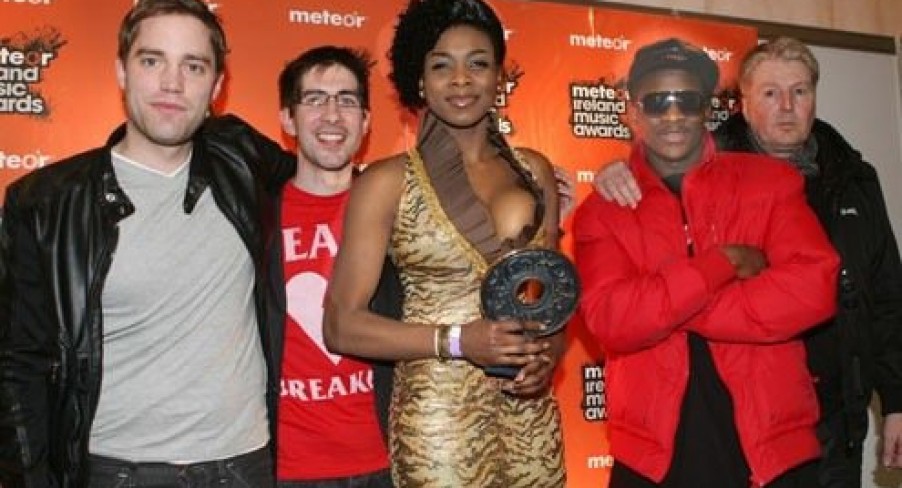 This week, PopCultureMonster got to chat with band of the moment Amasis, who were also one of PopCultureMonster’s Sound of 2010. Following their win at the Meteor Awards for Best Newcomer 2010, they have been a hot ticket, but we got an interview from Les Stapleton, songwriter and guitarist and all-round (and handsome, read on!) nice guy. He was very secretive about the band’s next move, but assured us that we wouldn’t be disappointed. This is one interview you don’t want to miss… Firstly, word goes that you took your name from the last great Pharaoh, can you explain why?

Because he was an interesting character who’s name began with the letter ‘A’ and the font we use for the name Amasis can be reconstructed into a perfect pyramid – a tad geeky.

We have known each other for 2 years or so and we met at a music college in Dublin.

The common interest in black music was the main reason we clicked – we had a casual chat about music one day and we formed the band from that.

How did it feel being crowned Most Promising Act at this years Meteor Awards?

Brilliant – it was great to have so many people get behind this style of music.

We will spend the next 4 months concentrating on the album and package a 30 minute show for live performances in the summer 2010.

Never Yours is very heavily Hip-Hop influenced. Is this your sound, or can we expect different things from each song?

We love to work with different ideas while keeping a common thread that could be described as having hip-hop and r’n’b influences but we also dabble with electronic sounds and like experimental sound design.

What’s the next single going to be?

That is a secret for now but it will be a shaker and mover.

The End – The Black Eyed Peas

Where have you performed? What are your favorite and least favorite venues?

What’s your favourite song to play live? I know you did Last Request, but do you regularly do covers?

We discarded a year’s work because of the direction the band’s music is going in now – I think the nature of how we make music now has changed radically since we started.

Myself and Fergal Toohey write, produce, engineer and Q.C. all of the tracks. We lock ourselves away from distractions and write using a variety of instruments. We then take it to the studio (Usually Grouse Lodge in Ireland) track all the parts and then bugger off to Sweden to mix it and New York to master it.

Absolutely – study all you can about the processes involved – learn a musical instrument and know music theory – and get very good at Pro-Evo soccer or no-one in the industry will like you – EVER! (Music is a 24 hour a day occupation so be ready for that too)

Any last words to add?

We wish to thank all of our supporters and hopefully we will see more cross-cultural music collaborations occur on the Irish music scene.

Not at this minute but I am the handsome man in the band.

PopCultureMonster can’t wait to see this band live this year and will be first in the queue for tickets, and wishes the the best of luck playing the Oxegen Festival in 2010. Check out the single that won them the award, it’s called Never Yours