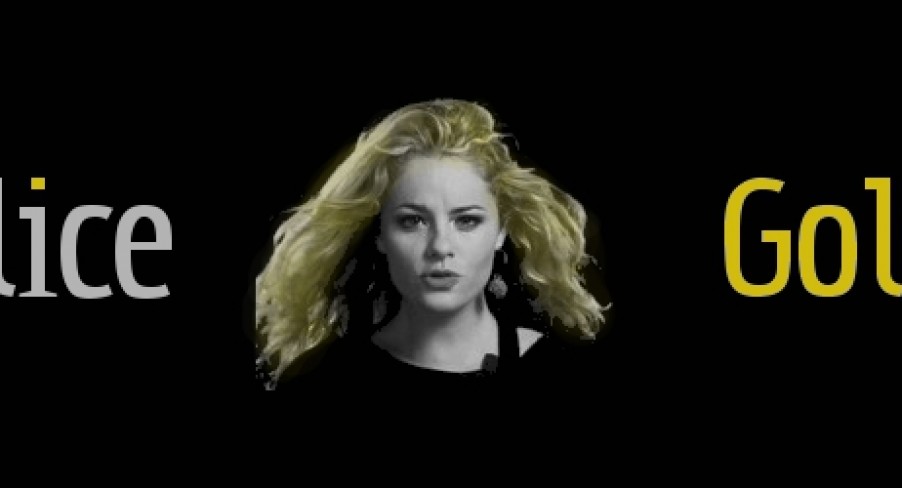 This is the real deal. Superb voice. Retro, hammering guitar riffs and wicked bass lines. Alice Gold is from the UK but she’s lived everywhere from a castle in Luxembourg to a boat in London, and even bought a one way ticket to the States, won a Winnebago in a poker game and recorded her vocals in her toilet booth. Ambitious and talented is just how Pop Culture Monster likes ’em. She released her first single Orbiter on Neon Gold records recently, and Pop Culture Monster must admit it’s one of his most listened to tracks this year. Luckily, he got a chance to sit down with Alice for a little chat and talks music, poker and sacrificial rites.

So, Orbiter is an f-ing tune. How’d it come about?

Thank you! It was actually the last track I wrote for the record. I stumbled across the guitar riff and the song kind of tumbled out. I was trying to capture lyrically the idea that having someone believe in you helps you become…? The searchlight imagery and the spacey darkness is trying to emphasise that its not always easy to believe in yourself or others, I guess.

My music has been described as sophisticated pop with a psychedelic edge. I definitely write quite classical, pop songs and hear them in my head being played by a very free, characterful band with killer bass lines and guitars. I’d say my music was influenced by all our favourite retro heros like Hendrix, Zeppelin and Joplin so in that sense it is natural and grounded in soul. It completely flies in the face of recent electro pop trends so, yes, I guess it does carve out its own groove of sorts.

Can you tell us anything about the album?

It is called Seven Rainbows, which is a very personal lyric in one of the songs. The main bass, drums and guitars rhythm tracks were all recorded live and on tape like the old 60s records. The over-dubs are mostly made up of one-takes, whether it be guitar or vocal takes. My producer Dan Carey and I decided that if a take felt good then we’d keep it, so it is complete with minor ‘mistakes’ and quirky sounds through doing that, which we both like. Its a very honest album, quite autobiographical. The songs were born from a lot of darkness and grief but the lyrics are drenched in hope because of that, which is why I imagine people connect to it. When did you decide music was the way for you? Or was it always there, you were just working towards it?

I have been very lucky in that I knew from very early on that I wanted to write songs and perform. I think initially when I was 8; it was because I was a precocious show-off but then as I grew older, I appreciated more and more how music connects emotions and brings people together and thats what keeps me focused now.

What was the winning hand that got you the Winnebago?

I’m afraid I can’t remember but let’s just say the guy I was playing against wanted me to win.

Did it have a name?

Yes, he was a 1978 Winnebago made by dodge so I unoriginally called him Dodge.

Yes definitely. I’m afraid I wear my heart on my sleeve and am terrible at hiding my thoughts, which is great for writing songs but terrible for relations sometimes. (ha ha) It’s a trait of mine my friends love and hate… I’m too honest for my own good. Therefore, I am a shit poker player.

What’s the difference between recording your vocals in a toilet of a Winnebago and in a studio? Which do you prefer? 😛

There was a lot more room recording in a studio and the reverb choices are nicer! Recording in Dodge was a very special time though so I’m afraid I can’t choose between the two. Any tour dates planned for Ireland in the future?

I hope so! I’m doing the UK Athlete tour in Nov-Dec… do we not come to Ireland then?

I always make sure I have a spare guitar pick on me, lots of glitter and waterproof mascara…

I should probably say my man but let’s pretend he was out buying dinner… probably my leather jacket?