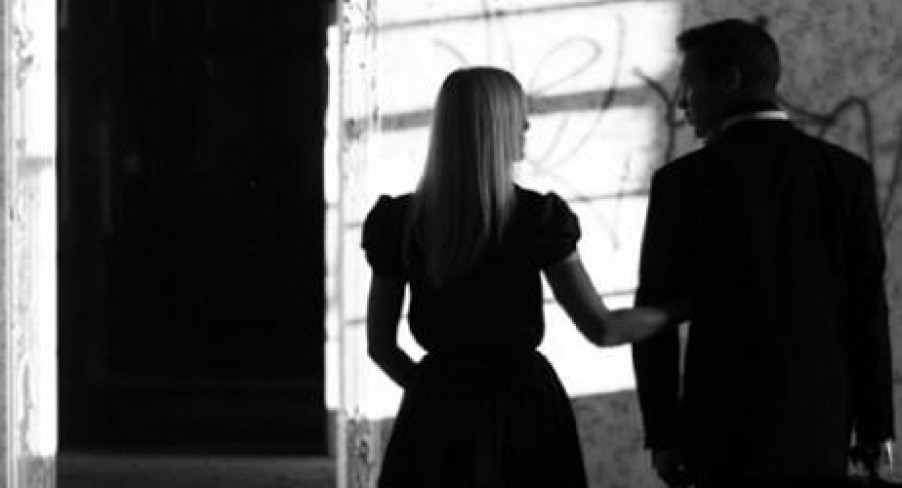 Bitterness has been on the rise since punk cabaret princess Amanda Palmer, of The Dresden Dolls and Evelyn Evelyn fame, enlisted the help of Bitter Ruin to support her in Glasgow and Dublin during the chaos of the volcanic ash cloud. Having attended that Dublin show, I can honestly say I’ve never been more thankful for a volcanic eruption!

This theatrical tour-de-force is made up of two young, talented musicians hailing from the UK. Georgia Train lends her haunting yet powerful vocals to Ben Richards’ Spanish-laced guitar. It’s very much a collaboration between the two, with both writing and singing. Their different inspirations and backgrounds mesh really well to unleash an onslaught of emotion. Across their two albums and EP, they offer up tales of love, sorrow, revenge, frustration as well as some rousing and energetic songs. Their dark themes and style is also a wonder to see live. When they returned to Dublin for a solo show, Georgia set the tone for the evening as she slowly lit candles in front of the stage. Their interaction as they sing together is just electric; they bring the story of each track to life before the entranced eyes of the audience. Luckily, I got to catch up with the pair before they jetted off on their tour to talk Greek mythology, touring and Amanda Fucking Palmer.

So, how did you two get together?

We met at music school in Brighton. Brighton seems to attract a lot of creative people and it’s a really amazing place.

What inspired you to become musicians?

I don’t think many musicians can answer that question. I suppose we’re just born that way. Music has always just felt natural.

Where did the name Bitter Ruin come from?

It comes from Greek mythology and simply means ‘the very end’. For those unfamiliar with your music, could you sum up your sound in five words?

Since your fateful slot as Amanda Palmer’s support earlier this year, it seems that you’ve been lovingly accepted everywhere you’ve played – judging by the countless comments from Dublin alone following your first show here. Within days of those shows there were people all over the world demanding you play their town. How was that whirlwind experience?

It was exactly that, a ‘whirlwind’. We were very busy and everyday seemed to fly by like some kind of strange, amazing hallucination. We learnt a lot very quickly, and we just loved that people were hearing, and liking our music. We ran out of CDs to sell and couldn’t believe the comments people were making. We also got reviews in THE SUN which we thought was just so bizarre!

You have a great connection to your fans. Do you think it’s important for artists to keep the lines of communication open between themselves and their listeners?

We think it’s extremely important. These guys are willing to give us hours of listening time (by listening to the songs) and so it’s only fair we listen back.

I’ve heard Amanda praise the power of Twitter and the internet a lot over the past year. What are your feelings about it and the doors it’s opened?

Twitter and Facebook have pretty much become our booking medium for gigs and they are just a great way to announce last minute things without filling up everyone’s e-mail inbox. Posting photos and links really lets people feel like they’ve had the backstage tour, without even needing to be in the same country. But there is always a part of us that would love to just see what would happen if the internet died! It would ruin a lot of things for a lot of people, but we’d like to see if we could all adjust, and how that might happen in the world of music. What musicians are you addicted to at the moment?

Generally we don’t get the opportunity to listen to music. We are both so busy all the time, but I think we’ll be doing lots of eight hour drives across America and Europe next month, so we’ll be getting our playlists ready. However, we obviously get to see a lot of local bands when we gig, in Brighton we’d recommend BirdEatsBaby and Carly Bryant. We also love Lonely Drifter Karen and Melissa Auf Der Maur.

You were asking for input on your travelling playlist for the tour. Any interesting tunes planned for the road?

Yes, our Facebook friends suggested a tonne of great musicians; we’ve just started to sift through them, but so far, we’ll definitely be taking Bjork, Fiona Apple and obviously some Dresden Dolls along!

What artist would you love to collaborate with?

Someone quite orchestral like Imogen Heap, maybe Regina Spektor. We’d love the chance/money to have a full orchestra, or even big band on stage with us and also dancers…creepy dancers.

I haven’t heard you do any yet, but if you were to perform any cover at your shows what would you choose?

We were asked to play a Johnny Cash cover once and we chickened out. The problem with our style of music is that it’s very dark, so without doing the obvious Kate Bush covers, we’d sound a little over-the-top. However, we’d love to do the Radio 1 Live Lounge, where they choose them for you. We all love a bit of karaoke…what? We don’t? The big tour is practically here. How excited are you? Where are you really looking forward to playing?

We are beyond excited! We’re like kids on Christmas Eve…Ben’s mostly looking forward to the aeroplane food. But gig-wise…We’re playing with the Dresden Dolls on the 3rd November at The Wilbur Theatre in Boston, this will be insane! But we also love playing in London too.

Oh, I think there’s plenty more of the world to be conquered. We despise everything about manufactured music and wet Radio 1 songs, but that doesn’t mean we are too proud to sell out!!! Ha ha. If we could cross over to the mainstream and play those kind of Wembley Arena size shows, you bet we would! We have big, big plans and this is just the very beginning. Erm, hopefully.

Finally, if a Pop Culture Monster was eating your house, what one thing would you save?

The laptop! Our laptop just died on us last month and we lost four years worth of mailing list contacts! We nearly died. Other than that, I think we’d save each other. Oh and maybe our songbooks.

Bitter Ruin will be touring America and Europe over October and November. If they’re playing near you, I more than urge you to nab a ticket while they’re still going. And it is an unwritten rule for fans going to the shows to buy and extra ticket and take along a Bitter Ruin virgin.