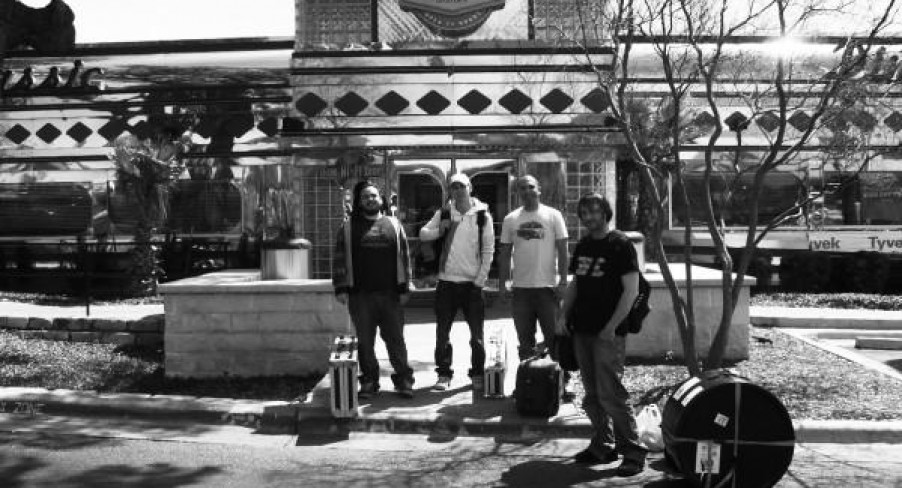 Formed in 2006, this 4 piece are known for their bouncy, catchy and vibrant songs and have gained heavy airplay from the likes of  Zane Lowe, Colin Murray and Huw Stephens. They released two songs on Bad Sneakers Records, Blah Blah Blah in July 2007 and Good to be Back in July 2008 which charted at number 14 and number 10 in the Indie charts respectively. They were nominated for, and came second in, the 2006 BT Digital Music Awards as Best Unsigned Band; were voted Unsigned Hip Hop Act of the Year by Channel 4 entertainment show Freshly Squeezed, and were the overall winners of the 2009 Futuresound competition which saw them opening the Festival Republic stage at both Reading and Leeds festivals. Currently working on their debut album, the band has seen label and MTV USA interested. Just back from SXSW, PopCultureMonster caught up with the guys to have a little chat.

Extremely well. We’ve just come back from South By South West Festival where we lived a full on rock and roll lifestyle for a week. Going back to day jobs is a bit of a comedown, and we feel like imposters teaching workshops, we all feel more comfortable and natural on stage.

Firstly, how’d the name come about?

We hadn’t come up with a better one and Andy’s brother, John Berkavitch, came up with it.

Lee (bass) and Slurpy (drums) have known each other since high school back in Bridgnorth, Shropshire. Lee went to Uni with Krish (guitar) in Leeds and they played in bands together before Middleman. Slurpy moved up North and joined them. Andy joined when they decided to start something new, different, interesting and exciting and needed a vocalist.

We all got on so well that we barely slept for the first week after we met. We just drank coffee and whiskey and wrote and played and felt incredibly excited. We laughed so much we all got rippling 6 packs and had to fight off Zack Snyder and Frank Miller who were trying to audition us for Spartans in 300. They made the film anyway with some other guys about a year later and I heard it did alright.

Both, and more. The next thing to concentrate on is the first single from the Album, It’s Not Over Yet. After that we’ll have one or two more singles before the album comes out in the Autumn. We’ll be playing all over the place starting in May, when we’ve got a week in Holland, but mainly focusing on touring the UK and Ireland.

We all have different musical influences, from the late, great Sparklehorse, to Aphex Twin, to Rage Against the Machine, to Aesop Rock for his incredible lyrics, but we draw inspiration just as much from the piles of bills we can’t afford to pay and the rush we feel creating something new.

We’ve played on some big stages to up to a couple of thousand people and it’s great, but one of our favourite venues has to be The Brudenell Social Club in Leeds, England. If we were a football team it’d be our home ground.

Can’t Hold Me Down. We finish the set with it and it always has the crowd jumping and dancing. It’s a crowd surfer-friendly one.

How many roads must a man walk down before you can call him a man?

Andy: For me being a man is about selflessness, consideration, responsibility, experience and forgiveness and I think most people probably know when they’re a man in the sense Bob Dylan probably meant it. At a guess though, probably 2,369, or 1,369 if one of the roads is the entire M1.

It started off with more of a hip hop slant, and has become more sophisticated, more guitar driven, more varied and difficult to pigeonhole. It’s always had poetic lyrics and big choruses, that’s still the case really.

We all write in the band so one of us does something then another, and the others join in, and we filter each others’ bits and then it’s a song.

If you enjoy it just keep doing it and don’t settle for music that doesn’t give you a rush of excitement. If you don’t get that, take up something that does, skydiving or crochet.

In a fight, a cow would crush a pig.

If you could have written one already famous/or not song which one would it be?

Andy: I wish I’d said Higher and Higher first, I saw the Dublin Gospel Choir do it at Electric Picnic on the Sunday last year just after getting up in the miserable rain and it was pure euphoria. I’ll settle for Don’t Think Twice, It’s Alright by Bob Dylan.

Krish: Have you got anything for heartburn?

Andy: I told you I was ill (care of the Spike Milligan)

Any info regarding singles/shows/tours or any shameless plugging?

Everyone check out MySpace for tour info, to listen to songs, to watch videos and see pictures and to join mailing lists and hear the latest news.

You can also check out the band on their Twitter @middlemanband, and they have an appreciation group on Facebook as well as a Fan Page. You can check out their videos on YouTube too but Good to be Back is below for your enjoyment!